Guitars in the Windows

The organisation that trains master craftsmen in France is called les Compagnons du Tour de France. This is a trades guild that has existed since medieval times, but was perhaps most active in the 18th and 19th centuries. There is a wonderful museum in Tours dedicated to the organisation. The companions, or master craftsmen, have left their mark in all sorts of surprising places if you know what to look for. For example, several times we have enjoyed meals at the restaurant run by the guild in Paris, Aux Arts et Sciences Réunis, where they have many carpenters' masterpieces on display.


A relatively simple guitarde with pincer ties in Chaumussay. 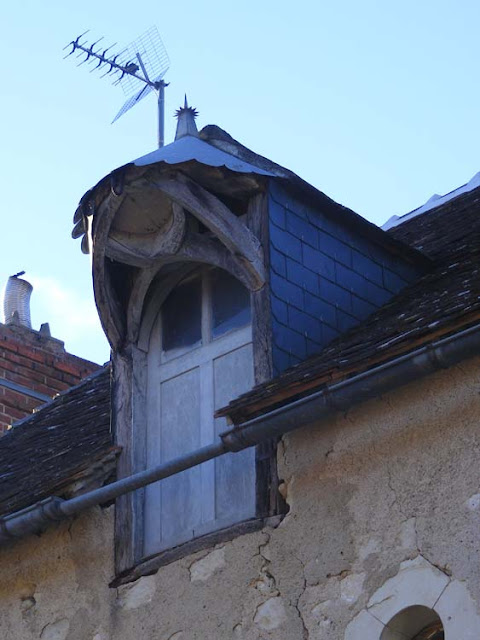 In Chaumussay, a tiny village just down river from Preuilly, there are two dormer windows (Fr. lucarnes). They are to be found on adjoining houses in the main street. They are of a type that is rare, being unusual and complex in form. They are made from curved and deliberately warped pieces of timber, making their assembly difficult and requiring specialist skills. They are clearly the work of a compagnon du devoir (master craftsman) and are in a form known as guitardes (guitar-like), a reference I assume to refer to their curved roofline. Similar complex decorative arrangements supporting a square balcony or dormer are known as capucines (I assume because they were thought to bear some resemblance to the hood on a cloak).

According to the director of the Musée du compagnonnage in Tours there are only three guitardes which incorporate this star motif in the Touraine [Source: Au temps du Chaumussay by Michel Brouard]. The star is possibly a 'secret' guild sign representing the Seal of Solomon. 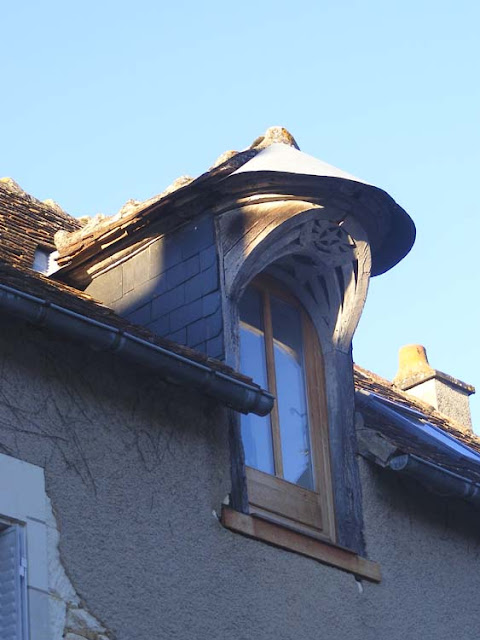 The second guitarde on the neighbouring house is different in design, simpler, but nonetheless interesting. The two houses were owned by the same person at the end of the 18th century.

For an example of a guitarde and two capucines side by side, check out a house on your left as you come through Perusson on the way to Loches. It's the balconies you want to look at, not the dormers, in this case.

[My translation] A guitarde is a wall dormer, circular or ellipsoidal in plan. It takes its name from the assemblage of pieces of curved wood called 'guitar ties'. Dormers on a square or rectangular plan are known as capucines but the term guitarde is equally used when the carpentry uses 'pincer ties', whether on a circular or square plan. The complexity of the assemblages, but also the aesthetic, drew out genuine master pieces from elder companions and even independent artisans in the 19th century and up to about 1950. A survey by Christian Chenault in the 6 départements of Région Centre has identified over 300 guitardes and capucines. [Click to see photos of some]

The guitardes were used by elder companions to signal to younger journeymen companions who were making their tour around France gaining experience that here under the guitarde was the workshop or home of a potential mentor.

Picadillo, a Cuban savoury mince dish that I had never heard of, which turned out to be fairly ordinary. I had some difficulty getting brown rice to serve with it and in the end had to settle for the quick cook variety from the supermarket. It was OK, but not as rustic as the real thing.
Posted by Susan at 09:00