It's difficult to imagine a more unpleasant bunch than the Visconti family who ruled Milan in the 14th century. Bernabo was by no means the worst of the bunch, but he doesn't come across as anyone you would want to spend time with. He was notorious enough to be mentioned by Chaucer, who describes him as the 'scourge of Lombardy' in one of his tales.

Bernabo spent most of his adult life excommunicated by a series of Popes, fighting everyone in sight, and fathering children. Married to Beatrice Regina della Scala of Verona, they had 17 (seventeen!!) children who lived to adulthood. He is also known to have fathered at least 13 other children by at least four mistresses, all of whom he acknowledged, as was considered proper in those times. One of his daughters married the Duke of Bavaria and was the mother of Isabeau of Bavaria, queen to Charles VI of France (known as Charles the Mad because of his psychiatric condition, which had him believing he was made of glass). Another married her cousin, Bernabo's nephew Gian Galeazzo Visconti. A third married the famous English condottiero (mercenary) John Hawkwood.


Bernabo Visconti looms over the gallery. 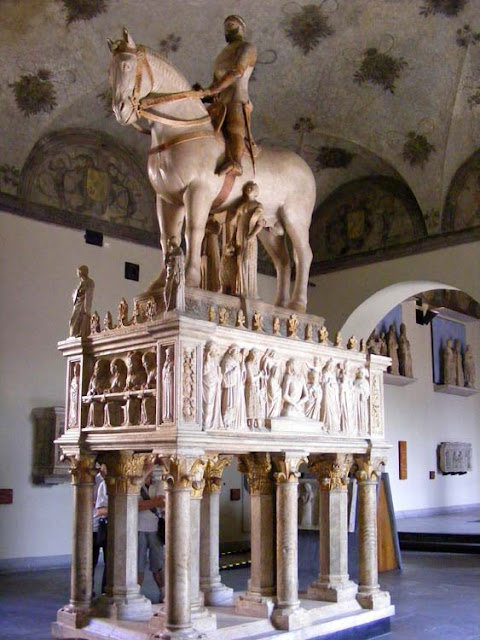 Eventually his nephew and son-in-law Gian Galeazzo deposed, imprisoned and poisoned him and took the duchy of Milan for himself.

Bernabo's funerary monument had been made a few years before his death, as was customary. Best to be prepared in those troubled times. It features a life size equestrian statue, which reveals that Bernabo must have been quite short, even if you take into account the large war stallion. The pair of women standing by the horse's girth are not, as I expected them to be, Bernabo's wife and a daughter. They are apparently allegories for something entirely inconsistent with his actual lifestyle (Truth and Justice or something -- I forget exactly what).

The funerary monument is one of the first objects you see when you enter the fine arts section of the Castello Sforzesco. At first sight it seems large and lumpen, but close up reveals tremendous detail (every hair on the horse, for example).

This is an incredible piece of sculpture!

It certainly is very impressive and rewards closer inspection.