Why are French Farm Carts Blue?

Traditionally in the Touraine, and in some other parts of France, horsedrawn carts were painted blue. There are several posited reasons [Source Au temps de Chaumussay by Michel Brouard]: 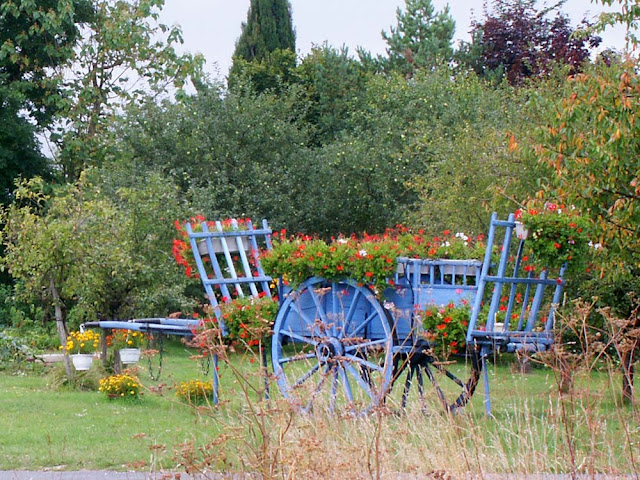 I've heard a similar story about kitchens and pantries in the 19th century being painted blue, because it was believed to be a colour that discouraged flies. The colour is known as dipteran blue in English as a result. In France this colour blue is known as bleu charrette (cart blue). Personally I don't believe the colour of the cart would discourage a fly attracted by a cart full of muck. Nor do I believe that woad/indigo would kill wood boring insects (or that carts were in any danger from such creatures). I think the last explanation, prosaic as it sounds, is the most likely.

I love that cart...
it has looked so sad and neglected the last few years...
I hope the new owners bring it back up to scratch...
they've had the orchard pruned and tidied.

Well spotted :-) This is an old photo,from 2008. I thought the cart was municipal. It didn't occur to me it was a private initiative, and I didn't realise there were new owners at that place. There used to be a similar but smaller blue cart in front of the poterne here in Preuilly but the council took it away. I think it was too much work to maintain. I agree that the one above has deteriorated in condition in the last few years.

In my complete ignorance I just thought they used the left over shutter paint...only joking ;0)

And I thought "Farm Carts" was Aussie slang for - no, forget that. Noyce Pic though.

The "municipals" created the little flower bed in front of it the year after it was neglected the first time...
it being a small, but actively inhabitaed, hameau....
I have no doubt that their neighbours will have politely told them how it should look!!

On the otherhand, I could do an A3 printout of my version and laminate it...
and leave it attached to the cart!!

People around here have told me that painting shutters blue used to be something done only out in coastal areas, not in Touraine.

Ken is right. That colour blue for shutters is not traditional for the Touraine. The blue colour used for shutters here is virtually grey, and varies in intensity depending on the age of the building ie darker grey for older buildings, lighter grey for younger (19th C) buildings.

I love those blue carts. I hope we see this one restored to its full glory next summer.

Would unhabited [?] be English for lived out?

Our area had two colours for shutters - one the blue/grey that you describe and the other a loud brown. A neighbour told me that the former was 'obtained' from an army depot and the latter from the railway works....he could have been joking....

chm.... unhabited in OooKay Anglais would translate as unclothed!