Looking towards Preuilly and into 'Free' France. 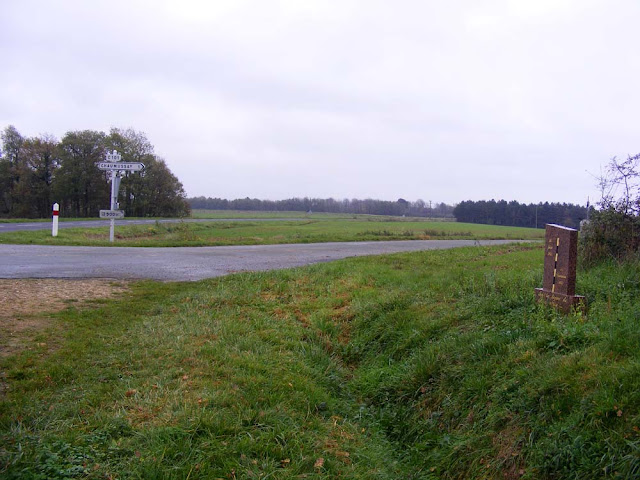 On this day 75 years ago the border between German occupied France and supposedly 'Free' France was tweaked. Between 30 June 1940 and 15 December of the same year the border ran through Chambon, then just to the west of Chaumussay, le Petit Pressigny, la Celle Guenand and Ferrière Larçon. Preuilly was in 'Free' France, le Grand Pressigny was in Occupied France. The border was drawn up partially to reflect where German troops had got to when the Armistice of 22 June was signed between France and Germany. Preuilly's capital was now Vichy, le Grand Pressigny's was Berlin (and locally administered by Chateauroux). On 16 December 1940 the border was pushed further west, to Descartes, where it remained until February 1943, when the Germans occupied the whole of France. Le Grand Pressigny and Abilly were French again.

The official reason for the change in the border was that it was compensation for certain sectors which had been 'improperly' occupied. In reality it was because the new border was easier to police. Life around the border and especially if you needed to cross it was oppressive and rigid.


The memorial to the Demarcation Line on the site of the border post just north of Chaumussay at Les Reuilles. 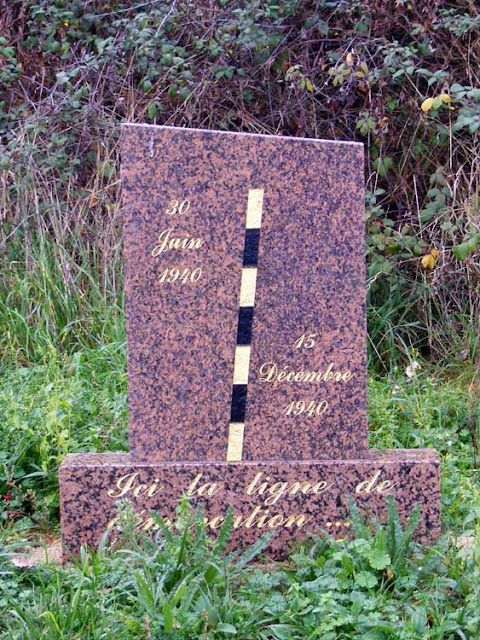 Here is a description of the situation by several locals, translated by me from Michel Brouard's recent history of Chaumussay:

The Demarcation Line crossed the D42 at Les Reuilles, guarded by the Germans. They had a weatherboard hut. They lodged at Petit Carroir [a nearby farm I think]. The French were at La Croix de la Villate [towards le Petit Pressigny]. We had frontier passes for the Line. Sometimes they would warn us of the arrival of less 'obliging' guards. Numerous personal messages were passed under the noses of the Germans. They left us with our radio, on condition that they could come and listen to it. They took the oats from the grain stores for their horses. They demanded that we prepare food for them -- chickens, ducks...They paid for the food. A. Multon.

The German post was on the Carroir track. The Germans had erected a quite substantial barracks. The Germans lodged at the Carroir.  The French post was at the Bergeon Cross. I was going to school. We would cross the line without too much problem. The Germans would give us money to bring back cigarettes from town. In 1940 there were Germans everywhere. They would wash themselves at the well, and had even broken the head of the well. We had to make them omelettes. When they were recalled back to Lésigny, the bridge was destroyed, they left in a hurry, all along the road we found plates and forks scattered. Raymonde Aubeau.

The Line passed la Croix Jourdain, the Breuil Woods, Les Reuilles. The post at la Croix Jourdain allowed the surveillance of the Millet track. The Germans stopped the postman and a female day labourer and drove them to the Grand Pressigny post. They were released that evening. The day labourer returning by the D42 was hassled again by the post at Les Reuilles...she was finally able to get home. The German patrols on horseback or on foot kept the Line under surveillance. The locals learnt the routines in order to facilitate the passage of escaping prisonners. Serge Villan.

We would hide messages rolled up inside bicycle pumps and also in the tube of the frame under the saddle. In order to fool the checks I would put fashion magazines on the baggage rack. The Germans would leaf through them, roaring with laughter, and let me go without checking properly. I was apprenticed to Madame Delaporte, the dressmaker. The German officers would come to have their gloves repaired. At the least noise, they would get up and be on the alert. Yvonne Massé.