Les étrennes are tips traditionally given in France to the people who deliver your post, take away your garbage and provide the fire and emergency service.

People give different amounts and the details of the practice vary from place to place a little.


The local firebrigade on an exercise at our friend Patrice's paint store. 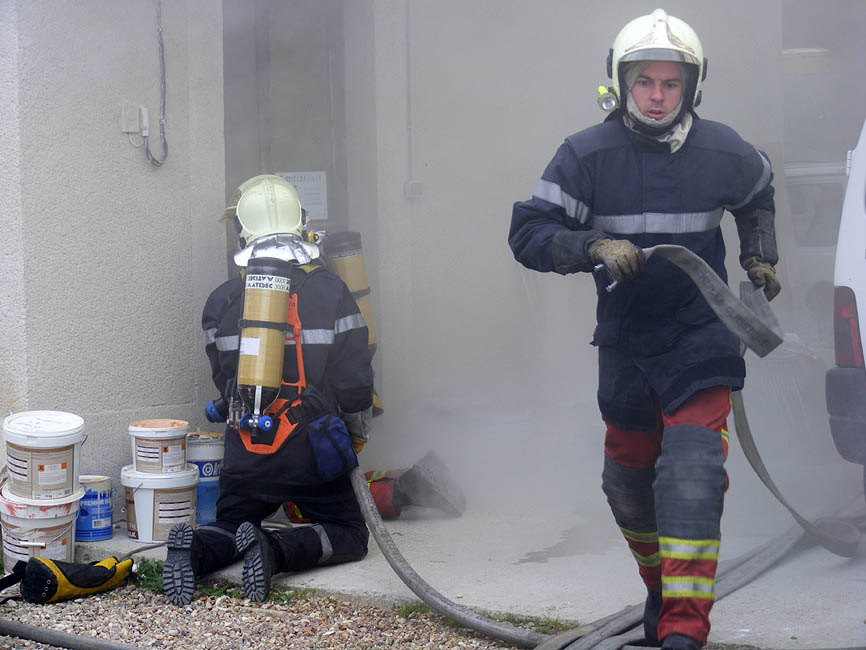 One of the volunteer fire brigade will call at the house sometime in December and ask if we want to make a donation. We habitually give €10, but I've heard that some people give as much as €1000. The money goes towards funding an end of year party for the fire brigade, all of whom are volunteers in Preuilly. I get a receipt for the donation and it is tax deductible.


Our local post office van. The factrice moved the vehicle when I asked if I could photograph it so I could get a better angle! 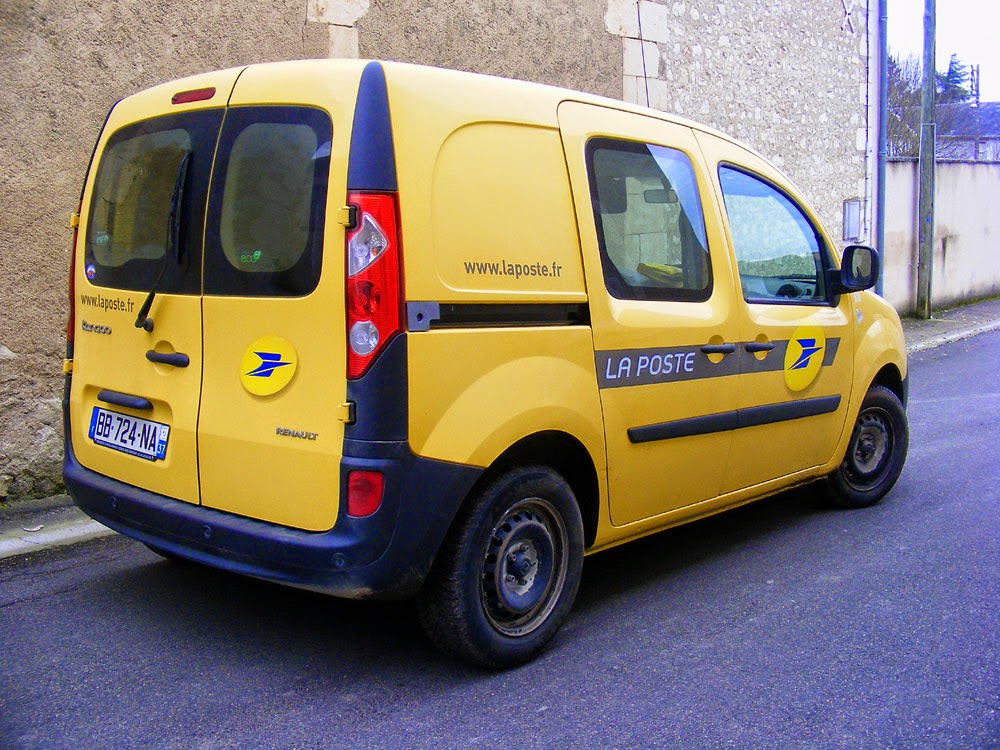 Our factrice (postwoman) calls at the house at around the same time of year, lugging a satchel full of almanac style calendars. I choose a calendar based on the photo on the cover and pay €5. The money is used by the factrice as an end of year bonus. There is no receipt and no tax deduction. I throw the calendar out since the pages with the dates on don't have enough room to write anything on and it is useless as far as I am concerned.


Our garbos at work. 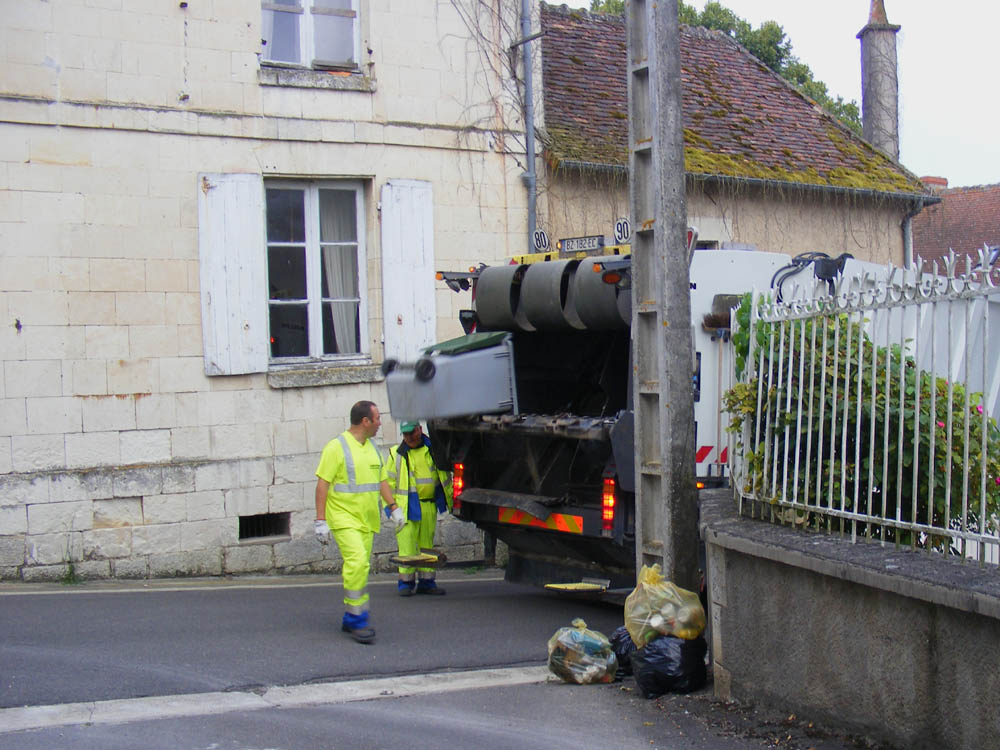 So far as I know no one tips the garbos in Preuilly, which may be a hang over from the days when the garbage was collected at 4am. No one is going to get up at that hour to offer a tip. Now they call at 6am, but not everyone is up by then either, so I think the practice of tipping the garbos died out long ago in Preuilly.

Originally les étrennes were gifts given amongst friends and to cement political allegiances on New Year's Day. The practice was banned as corrupt in 1789 by the Revolutionaries. By the 19th century and the rise of department stores who promoted Christmas gift giving the tradition was all rolled up into the Christmas festivities.

And reflecting current events, here is an amusing take on the subject.

****************************************************
Counterfeit Cheese: The Nouvelle République recently (24 November) reported on the rash of counterfeit goods that have been seized by Customs and Excise officers lately. Apparently pharmaceuticals (medications) are the most frequently counterfeited items. Eighteen and a half thousand items of fake designer clothing was seized on the highway between Tours and Bourges and now has been incinerated. Also seized was a batch of hedge shears. One of the things the authorities receive the most complaints about is fake Sainte Maure de Touraine goats cheese.
Posted by Susan at 09:00

"One of the things the authorities receive the most complaints about is fake Sainte Maure de Touraine goats cheese".....
That really made me smile when I read it...
it seemed to me like people forging 5 cent pieces...
Ferme du Pré's logs haven't got a laser-engraved straw...
it is just a sterilized barley straw...
yet theirs' is the cheese that Le Promenade chooses, over Limouzin Freres, as their St.Maure!!

In the UK... Boxing Day is when the "tradespeoples" used to come round for their tips... it still happened as I was a nipper...
even the milko!!
We always buy the pompiers calendar as well as the posties...
they both have useful info inside... but they tend not to get hung on a wall!

The difference is that Ferme du Pré and La Promenade are not attempting to pass off their cheese as AOC Ste Maure de Touraine, and it's being sold locally by people to people who know about it already. It's like I always say, the AOCs only matter if you are consuming a product outside of its AOC. Then it is your guarantee of quality and origin. If consuming the product locally, then local knowledge matters.

Yes... agree!
By the by... I still can't find the software that came with the bat detector...
but I have found it on t'interweb here:
http://batscan.software.informer.com/
and it is a way newer version than I've got installed...
the review is of 9.6.. [ignore the "screenshots"... they look to have something else linked?]
the download is for 9.8....
and the one here is V7.8.

Oh wow, I havent thought about that practice in years....if I remember correctly, the standard was 2 " Tallies " for the garbos, the same for the "dunny man" (nightsoil collecter ) and I don't remember what the postie was given.
That was a long time ago ! .

Thanks. I've corrected it now.

It always amuses me that the person delivering the bills -factures- is called the factrice.
Two rather dashing pompiers called chez nous last week. I think they send the good looking ones to increase the donations!

My mother-in-law always gave money to her grandchildren after Christmas that she called "étrennes". The Larousse gives as a definition: 1) Gifts given on 1st January or at Christmas 2) End of year gratification "Donner des étrennes au facteur".
Our postman left a note saying when he'd call round for his étrennes. We gave 10 euro. JM wanted to give 15 euro but I refused because this particular postman is always putting someone else's letters in the letter box. He does it along the whole street. Instead of having to stop and get out of his vehicle twice in a row, he uses one box for two people! No one else seemed to have analysed the situation. They just thought he was making a mistake. However, he does take letters to post if you put a clothes peg on the box and the letter inside ...

Since the services of the dunny man were no longer required by the mid-70, definitely a long time ago :-)

Me too. I have always assumed the two words were connected etymologically.

I've never understood why everyone tips the postie here, no matter what sort of service you get, especially since they are paid a salary.

P.S. I told the postman (politely) that I didn't need his calendar. He was happy because they have to pay for their calendars (I don't know how much) so we actually gave him more than 10 euro after all. I learnt all about the calendars when I had an office in Nogent which had a window next to the mail boxes. I always had a little chat with the postie.

Our village was calendar mad: everything from the OAP's club to the private school via the local footballers' take on the Dieux du Stade.
I was happy to cough up for the Sapeurs Pompiers - who did seem to send their more presentable specimens round with the calendar - and we always had superb service from our postmen and postladies so no reluctance to part with the uckers in that direction. I still order a calendar to be sent out here for their colleagues in the Correos.
The dustmen were another matter...they were so helpful,would take anything...but you had to be up and at the gate in order to catch them to give them their tip.

We saw an elderly man waiting for the post van to hand over a letter this morning. That would not happen in the UK. Even out in the sticks the postman/lady will not take mail for posting and you have to take it to a post box.

It seems to me the trash collectors, for obvious reasons, and the firemen, because what amazing courage to go willingly into a burning building, are most deserving of extra rewards, salaries or no.

And if the young gentlemen are calendar-worthy, so much the better.

I do like the Australian usage "garbo". I suppose working in that line, you might well find your job makes you "vant to be aloone....."

One of the main advantages of these diminutives (garbo, postie, ambo, firie) is that they are completely non-gender specific.

I have every respect for our sapeurs pompiers, especially as in Preuilly they are all volunteers. I made the one who collected the étrennes a couple of years ago blush by asking which month he was :-)