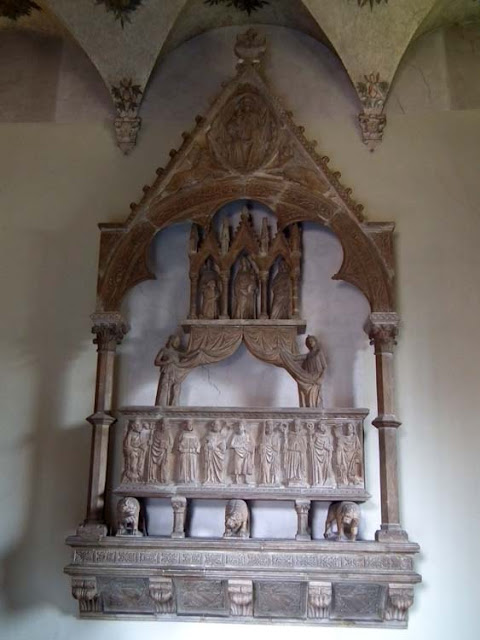 This funerary monument, with its rather personable lions, now displayed in the Castello Sforzesco in Milan, came from the church of San Francesco in Como. It was made sometime after 1339 for Franchino Rusca, a member of an aristocratic family from Como. The sculptor was a Tuscan master, possibly Giovanni Balducci. Franchino died in 1335 or 1339 but the sculpture dates from about 1350. A representation of Franchino himself would have lain on a slab between the two angels in the middle. The well preserved monument is Gothic in style and very similar to a number of other contemporary Tuscan tombs. 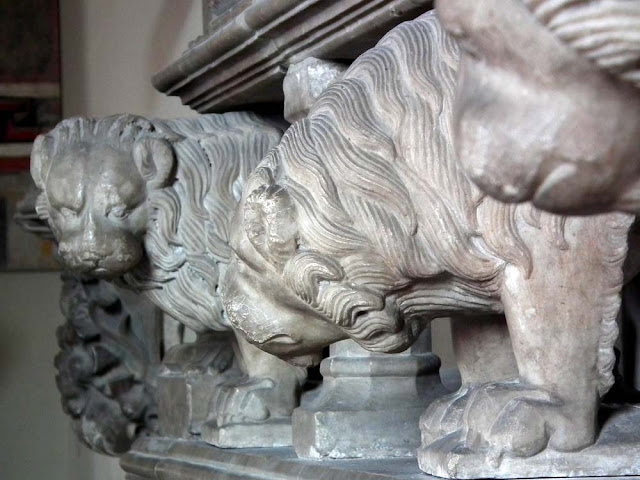 To follow the oysters was a fridge soup based on this one. The spice mix is too peppery but otherwise it's a good basic soup. You can keep to the spirit of it and keep it vegan with the cashew cream, but I added milk to it instead. I included swede in the veggie mix.
Posted by Susan at 09:00

Susan, have you ever tried steaming oysters or roasting them in the oven? Wash the shells well and "cook" the whole oyster for 5 to 10 minutes, deep side down and the flat shell upwards. The shells pop open, and as soon as they do they are ready. That makes it easy to pull off the top shell, and the oysters are not cooked enough to alter their taste or texture drastically. You can even put oysters in the microwave to open them but I haven't tried that.

No, I've never done that. It's a good thought.