In the chapel of the Hospice Saint Roch in Issoudun is a late 15th century stained glass window depicting Charlemagne and Saint Louis.

The stained glass windows of the oratory of the chapel were created at the same time as the other transformations at the end of the 15th century. Charlemagne and Louis IX are included here as part of the iconographic theme of King-Saints. Both were canonised. 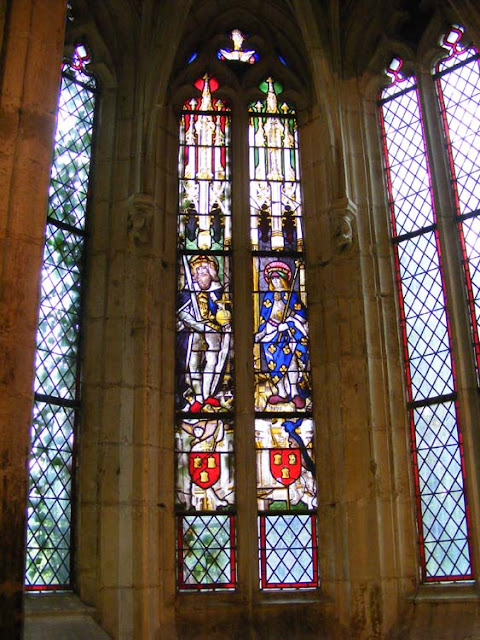 According to the 13th century legends Charlemagne was considered the first pilgrim of Saint James (Saint Jacques). Having seen the saint in a vision, he had built the first edifice dedicated to Saint James. Louis IX is reputed to have feed the poor, visited the sick and washed the feet of the leprous. In particular, he had the Hospice des Quinze-vingt constructed in Paris. The two kings symbolise Christian hospitality and remind of the duty to welcome and help the poor. Finally, they are related to the evocation of the Passion of Christ.

Charlemagne assembled relics such as bits of the crown of thorns, pieces of the true cross and shroud of Jesus in Aix-la-Chapelle. Saint Louis constructed the church of la Sainte-Chapelle in Paris to house the nails from the Crucifixion. Their importance is emphasised by their image carved into the arms decorating the keystone of the sanctuary vault.

Below the portraits of the two kings in the window there are two angels carrying the coat of arms of Guillaume de Cambrai, Archbishop of Bourges, who was the donor of the windows. They were almost certainly executed by a stained glass workshop in Bourges.
Posted by Susan at 09:00

This hospice is a treasure trove!

Beautiful windows. I've been reading Derek Wilson's biog of Charlemagne; I'll have to look back to see how this fits into that narrative.

I don't know that biog, I'll have to check it out. Charlemagne certainly was an interesting person, so I'd like to read it.

I'm sorry. I said "blog" but meant "book" -- a blog on paper, I guess. That's what comes of too much time on line.
I sent you an email answering your reply to me re the car.