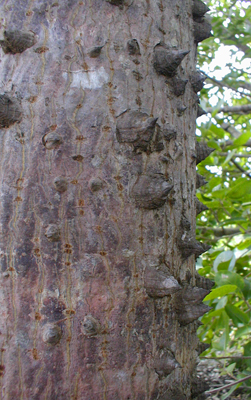 Bombax is a genus of large tropical trees, one of which, B. ceiba, is native to northern Australia. This one, with its impressive array of pointy protrusions on the trunk, was photographed in a picnic area in the Northern Territory of Australia.

I have a Brown Hare Lepus europaeus (Fr. un Lièvre d'Europe) back in residence. As usual, it was invisible until I got to within about 10 metres, then it shot out of its form (nest in the long grass) and disappeared over the field beyond. It looked big and fluffy, in good condition. I was also joined by a twittering phalanx of Long-tailed Tits, moving from bush to tree searching for insects.

I picked some small broccoli heads for dinner and tidied up some prunings into neat piles to dry out and become next year's kindling.

Dinner was bavette d'aloyau steak from the butchers with a slab of homemade foie gras on top, served with potatoes from the new rotisseried chicken stall at the market and our homegrown broccoli.

Gingernut biscuits, with good crunch and plenty of ginger.

What is the origin of these protusions? Are they the equivalent of spines in many plants? They seem to be growing at random. I don't know if you have bears in Australia, but probably with such defenses they wouldn't be able to climb those trees.

They are spines. I don't know what they are protecting the plant against. Not bears anyway, since there aren't any.

What an incredible looking tree trunk! Protection or just ornamental....whatever the reason it is interesting! TFS!

Yes, I thought it was fairly impressive.