I went on an Association de botanique et de mycologie de Sainte Maure de Touraine fungi foray on Sunday 22 November in the Forest of Loches. Unfortunately my camera batteries died and the spares I was carrying turned out to be dead too. Thus I have almost no photos of the day. Luckily André was there and took lots (that's me in the first photo in the orange gilet and green backpack). 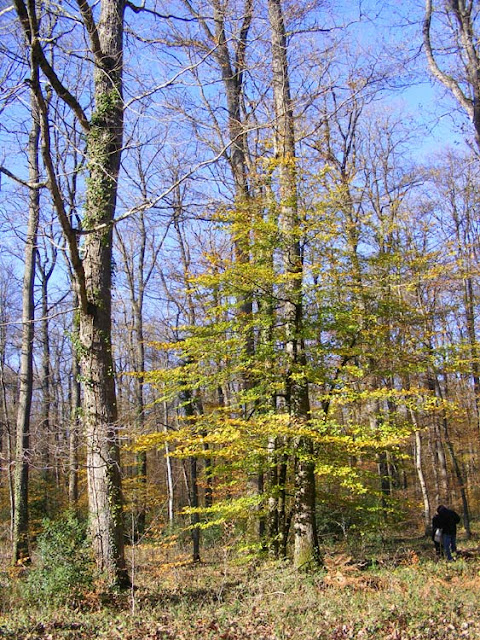 The area we surveyed was near the Pyramide de Saint Quentin, in some parcels which were dominated by Sessile Oak Quercus petraea, but with quite a few Beech Fagus sylvaticus too. Beech isn't very common in the Touraine Loire Valley. We are far enough south for it to get a bit hot for Beech. So it's always interesting to venture into a forest rich in this species, especially for fungi, as there are many species which are found in association with it that you don't get elsewhere. 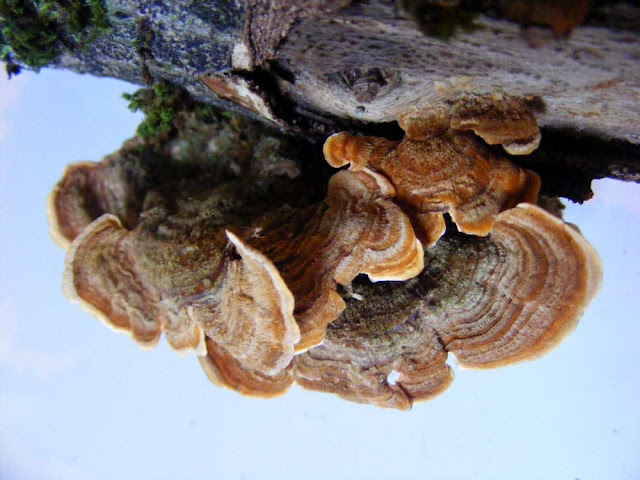 On this outing the fungi du jour was definitely the crust fungus Stereum insignitum. It was everywhere, growing from fallen Beech branches. S. insignitum only grows on Beech. It is very thin, does not have pores and is velvety.

Apart from this lovely orange bracket fungus, we found remarkably little, although there were some other notable bracket fungi as well as some terrific corals and brains. Here is a list of some of the species we found:

Grey-spotted Amanita Amanita excelsa var spissa - has grey (not white) flakes on the cap. It's not toxic, but not worth eating.

Coral fungi Ramaria sp - coral like in appearance, these are purgatives, so not good to eat.

Bitter Oysterling Panellus stipticus - grabs you by the throat it is so astringent.