A Tithe Barn and Dovecote in Chaumussay 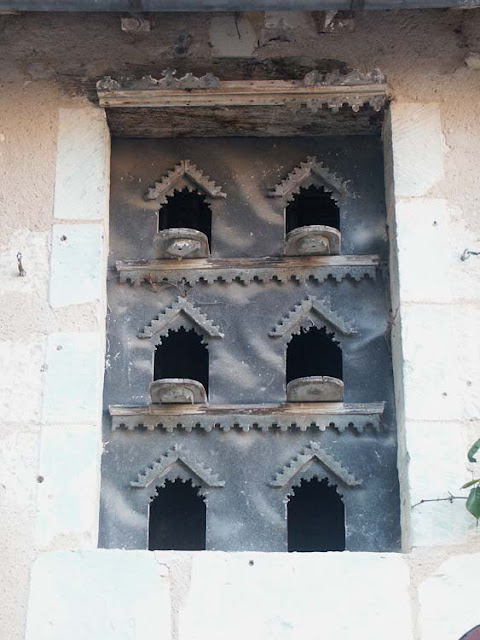 Under the porch situated to the left of the entry to the church you will find the former tithe barn (Fr. grange dîmière) with its door and some lovely carpentry. Over the centuries this space was used to store tithes destined for the church. Today it is used by the local council for materials and equipment. Behind, to the left, you will find in an old opening in the barn a remarkable small dovecote, a real artisanal masterpiece in zinc, with additional motifs in wood. It has six openings above rounded landing platforms from where the occupants can coo (and poo) to their hearts content. According to a theory developed by a 20th century historian, this dovecote might have been moved in the 19th century from the Priory of Saint Valentine to the tithe barn. If this is the case it is a significant artefact, since virtually nothing remains of this substantial and once important priory.


Carpentry in the roof of the tithe barn. Remind you of anything? 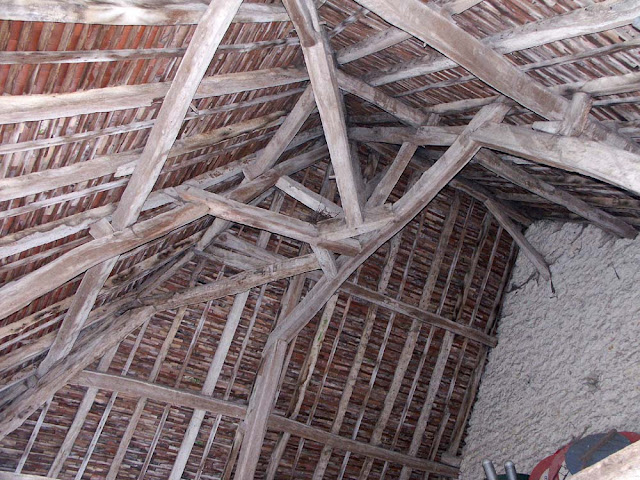 Continuing along the barn wall you will find a much older wall, recently restored and capped to prevent water infiltrating. This wall runs along the path taken by the priest each evening as he read his breviary in its shelter.


The tithe barn (the church is to the left, visible through the arch). 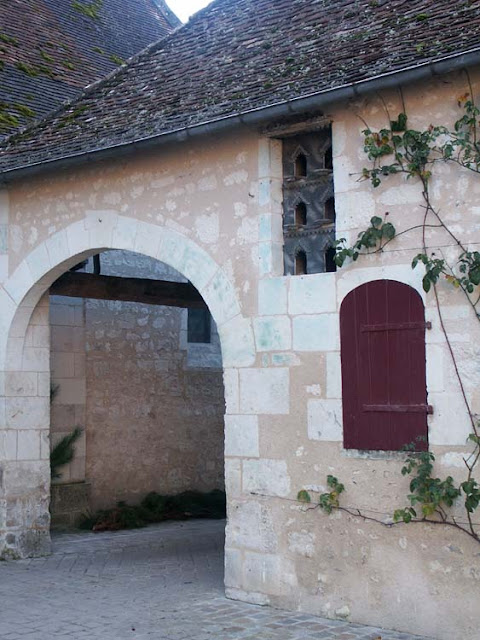 I love that little dovecote...
especially the combs to clean the birds' backs...
Chaumussay is full of little surprises...
on one hand I'd like to live there....then I think of the hassle to be had from Battifrance...
and think... it's only next door... save the hassle... I can visit!
And do... the river there is very calming....and traffic cannot 'hurry' through the village.

As for the timber-work... I knew there was something it reminded me of... now you have made the link!!
There is something about all this old timberwork that makes me want to feel and stroke it...
was I a 'charpentier' in a previous life...
wotever.... I always admire their work!!

Isn't it reminiscent of your upstairs bathroom?

No shops is what I think, especially no boulangerie if one was thinking of living there. Like you I appreciate how close it is for visiting though (walking or cycling distance for me, although I usually drive because I'm going on to other places).

Indeed it is. Virtually identical, and I linked to a post on our bathroom so you can compare.

40 minutes to go.... Euro time....
MERRY CHRISTMAS EVERYBODY!!
And a healthy, prosperous and fulfilling Twenty-Sixteen!

Merry Christmas to you two, and likewise for the New Year.