Caterina de' Medici was born in Florence in April 1519, the only child of Lorenzo II de' Medici and his French wife Madeleine de la Tour d'Auvergne. Although the de' Medici family ruled Florence and Caterina was a direct descendent of Lorenzo the Magnificent, her father was not a titled aristocrat until his uncle, Pope Leo X, gave him the lifetime title of Duke of Urbino.


A portrait medallion of Catherine at the age of 35, Chateau of Chenonceau. 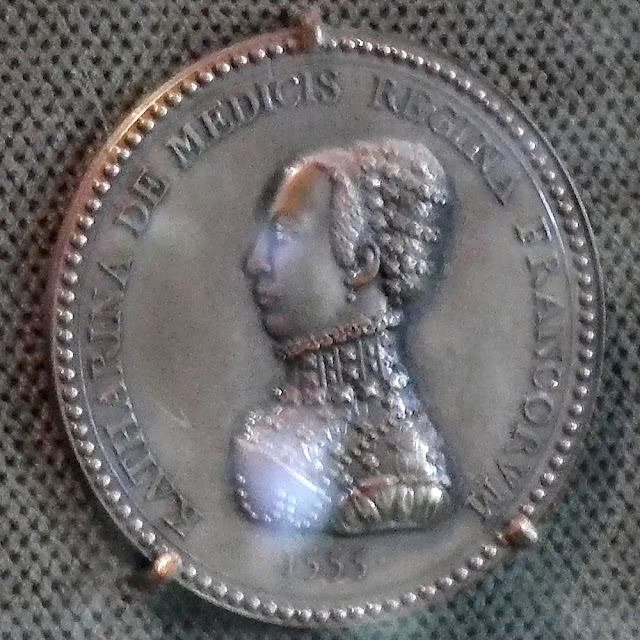 According to a contemporary chronicler, her parents were as pleased with her as if she had been a boy when she was born. But within weeks both her parents were dead. Her mother probably died of that great killer of childbearing women, puerperal fever, her father of syphilis. The couple had only been married for a year. The ceremony had been at Amboise and very much had the blessing of the French King, François I. Florence as an ally was all part of his machinations against the Habsburgs, who encircled France with their empire. When Caterina was orphaned he wanted to bring her to France but the Pope placed her with her Florentine grandmother.

In 1527 her family's enemies seized Florence and she was placed in the care of a series of convents, essentially as a hostage. As the conflict over Florence escalated she was very lucky to escape being murdered. Finally, a deal was struck and she was sent to her uncle in Rome, Pope Clement VII. She was 11 years old and it was time to find her a husband. Suitors popped up from all over, but the winner was François I's proposal of his second son, Henri, Duc d'Orléans. The marriage took place in Marseille in 1533. Catherine, as she must now be called, was described as small and thin (to the point of looking malnourished), not pretty and with the characeristic Medici slightly protruberant eyes. Later, as a mature woman, she would be described as imposing, with a shapely and magnificently dressed figure and exquisite hands and feet. Later still, she had put on a lot of weight, and being very short (under 5'), it was very noticeable. Her double chin features in many later portraits.


Enamel triptych of Catherine at prayer, from the 1560s, Chateau of Blois. 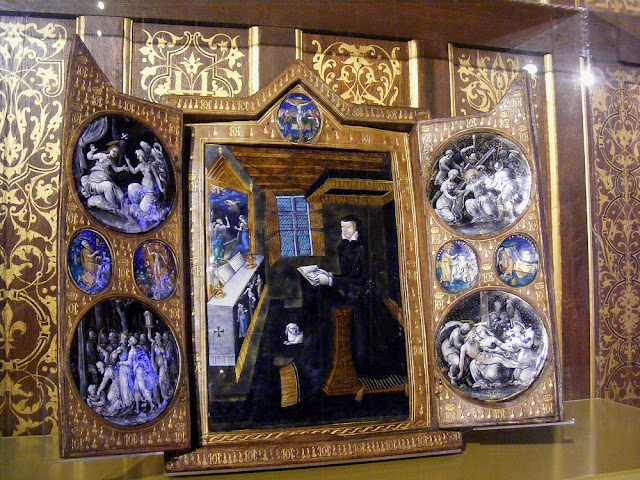 The 14 year old newly weds survived the indignity of François witnessing the consummation of their marriage and cracking jokes about it afterwards. However, it was very soon clear that Catherine was not to Henri's taste, and he rarely spent any time with her. Instead he took mistresses and 18 months after their marriage he was involved with Catherine's much older second cousin, Diane de Poitiers, who would remain his mistress for the rest of his life. To add to Catherine's discomfit, Uncle Clement died and the new Pope failed to deliver her dowry. Father-in-law François was most put out.

For the first 10 years of Catherine and Henri's marriage there were no children. Henri never went near Catherine, so it is hardly surprising. Initially it wasn't too much of a problem, but when Henri's older brother, the Dauphin François died, Henri became the heir to the throne. Without a 'spare', those around the King started to get edgy. Henri was clearly fertile. One of his early mistresses had produced a child. As usual in these situations, talk began to grow of annulling the marriage on the grounds that Catherine was barren. Fortunately for Catherine, she became pregnant in the nick of time. 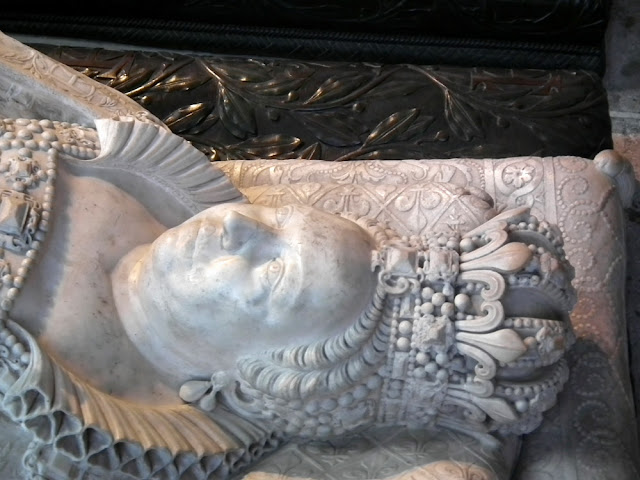 Henri had been coaxed into doing his duty a little more often and Catherine proved to be extremely fecund. After the first baby (a boy, no doubt to everyone's relief) she could look forward to a pregnancy every year or two until Henri's untimely death. No doubt the ease with which it turned out that she conceived was a relief to Henri too. In the end she had at least 9 pregnancies and ten children, seven of whom made it beyond infancy. She would outlive all but two of them.

François I died in 1547 and Henri and Catherine duly became King and Queen of France. It is clear that right from their wedding day Catherine had wished for a more intimate relationship with Henri. She was a capable and intelligent woman, but he simply sidelined her to a nominal role. The place she wanted in his life was occupied by Diane de Poitiers and he had no qualms about letting the whole world know it.


Portrait of the widowed Catherine, Chateau of Blois. 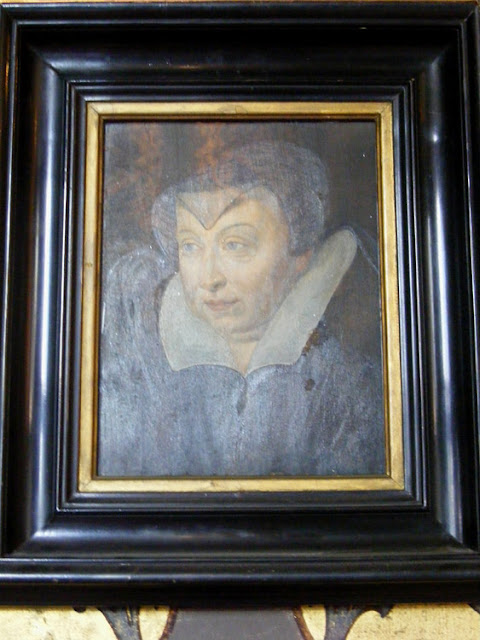 When their eldest daughter Elisabeth was 13 she was betrothed to Phillip II, King of Spain. Much feasting and celebratory jousting ensued. The King insisted on participating, despite having complained of dizziness earlier in the day. Gabriel de Lorge, Comte de Montgomery, a capitain in Henri's personal bodyguard known as the Garde Ecossaise (Scots Guard) nearly unseated him in one round and he insisted on a re-match. This time Montgomery's lance caught him on the helmet and splintered. A piece of 'goodish size' as an eyewitness termed it penetrated his visor and went into his eye. He died 10 days later, leaving Catherine the widowed mother of a new teenaged king.

With Henri's death Catherine at last came out of the shadows and into the centre of the political limelight. Initially too shocked and consumed with grief to effectively act as regent she allowed the Guise brothers, the uncles of the new Queen, Mary of Scotland, to take control. The young King was technically an adult and could have reigned independently, but he had never been in robust health and was considered too delicate for the task.


Catherine as a corpse, depicted on her funerary monument in Saint Denis. 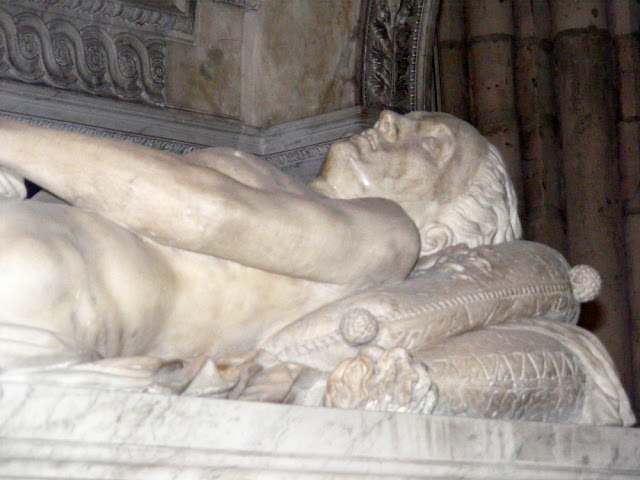 As soon as Catherine had recovered sufficiently to act decisively, she took her revenge on Diane de Poitiers. Catherine ensured that Diane returned royal jewellry and was forced to exchange the Chateau of Chenonceau for the Chateau of Chaumont. Diane, who was nearly 20 years older than Henri, was by this time an elderly lady. She simply retired to her private chateau and very sensibly lived quietly after Henri's death.

For the next thirty years Catherine worked tirelessly to ensure that her boys retained power. One after another her sons came to the throne but died young and childless. The Wars of Religion raged. She married her youngest daughter Marguerite to the leader of the Protestants, Henri de Navarre, in the hopes it would bring the two sides together. Instead by bringing Protestants and Catholics together in Paris for the wedding it inflamed the situation. Violence between the two sides escalated out of control and several days after the wedding Protestants were massacred at the orders of Charles IX, her second son. Catherine herself must have been a party to the decision and the Saint Bartholomew's Day Massacre has played a great part in her reputation as a ruthless, untrustworthy and downright evil disciple of Machiavelli. At the same time Henri de Navarre's staunchly Protestant mother, who had reluctantly come to Paris for the wedding, took ill and died suddenly. This is the beginnings of stories of Catherine as a scheming Italian poisoner, but the reality is that she worked to keep France stable and she was prepared to negotiate almost any compromise to keep a lid on the civil war. She was considerably more politically savvy than her last two surviving sons, Henri III and François, Duc d'Anjou, who between them nearly lost the kingdom on several occasions. 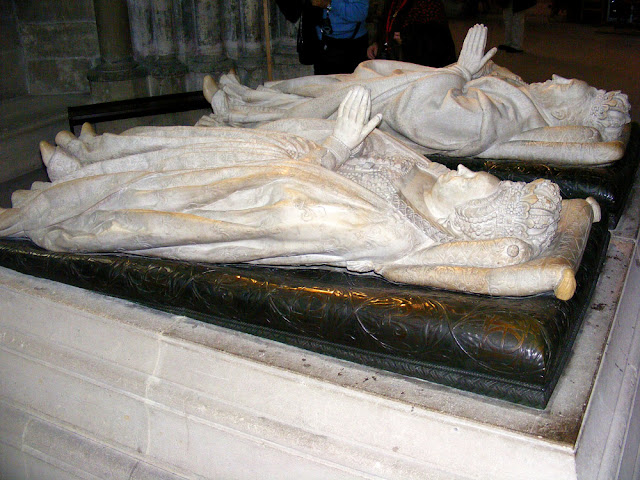 In the end, all her efforts came to nothing and when she died in 1589, her son Henri had just had the powerful and popular Catholic Duc de Guise assassinated and she was estranged from her daughter Marguerite. All her other children were dead. She knew her son's foolish actions would have disasterous consequences and that the Valois family would lose the throne.

Curiously, it is Henri IV, the incoming Bourbon king and her son-in-law, who best recognises her intelligence and tenacity in truly frightening times. He is reported by Brantôme as saying:

I ask you, what could a woman do, left by the death of her husband with five little children on her arms, and two families of France who were thinking of grasping the crown—our own [the Bourbons] and the Guises? Was she not compelled to play strange parts to deceive first one and then the other, in order to guard, as she did, her sons, who successively reigned through the wise conduct of that shrewd woman? I am surprised that she never did worse.

Fascinating post....
I am meant to be doing other things... but had to read this from start to finish.
What a dame!!
T

I agree with Tim. What a life the woman led. The portrait of her at
Blois is wonderful...something about the eyes.

Indeed. I doubt she was very likeable, but there is much to be admired.

The portrait is a version of the last official one done of her. The original drawing, which is in the BnF, shows her with grey eyes, reflecting the colour of her hair and veil. At least one other artist interpreted this as her having blue eyes, but I think it is unlikely she did. I suspect hazel eyes. She is often shown with sort of grey-brown eyes.

Do you know the Robert Merle 'Fortune de France' series? The earlier volumes treat of the period you are dealing with here.
I read them years ago and have just picked up a couple again to enjoy.

Susan,that was really interesting. As usual, you manage to bring an historical character to life and I might actually remember something about her! Jean Michel is reading a book that contains one-page portraits of 200 women with various claims to fame. I tried reading it but it is so dry that I gave up. You could do a compilation of your portraits and publish it.

No I don't. Thanks for bringing them to my attention. Apparently they were translated into English last year. I will look out for them, they get very good reviews.

Thanks, but I'll stick to blogging :-)

They're great fun in French as he uses language that was current in Perigord in the period.