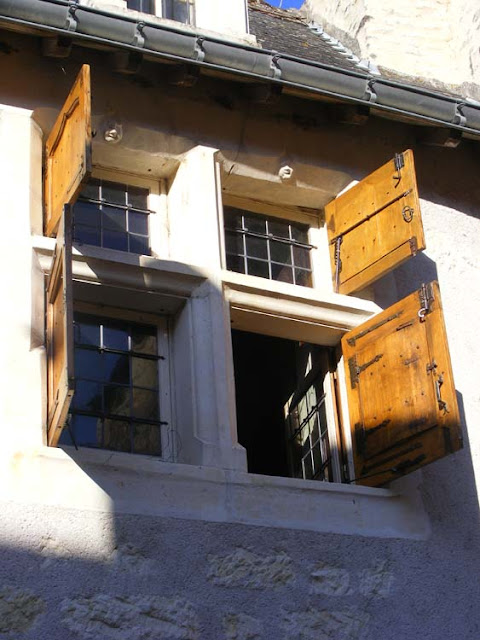 This exceptionally well restored medieval window is in a house in Le Grand Pressigny. I love everything about it -- the stone mullion, the little faces carved into the subtle ogee lintels, the small panes of leaded glass, and above all the superb shutters with all their careful detail.

****************************************
A la cuisine hier: I cooked up a few apples and hung them to drain through the jelly bag. The resulting liquid will be combined with the same from some blackberries from a few days ago for blackberry and apple jelly. I also poached some little homegrown pears in white wine and sugar in preparation for making a pear and chocolate mousse.

Dinner was pork chops served with sautéed zucchini, steamed cauliflower, baby carrots and blue cheese sauce. Followed by roasted caramel peaches with (shop bought) vanilla icecream.
***************************************
Au jardin hier: I had the pleasure of Antoine Chaboisson's company yesterday in the orchard. He's the local tree surgeon and I had asked him to visit to inspect the trees and advise on any work that he could do. He said not too much needed doing, just une toilette as he put it. We discussed the fact that some of the trees are struggling (pears, plums and yellow peaches especially) and he reckons it's lack of water. He thinks that because of the slope and the composition of the soil the orchard is extremely free draining. The trees don't get a chance to suck up enough water in dry spells. He advocates 1. cutting back the main trunk of certain trees and allowing a vigorous new shoot from the base to take over as the main trunk; 2. planting a mixed wild hedge around the boundary; 3. concentrating on the trees that do well ie work with what nature has given me. The trees, which are about 20 years old, are reacting to a period between 2003 and 2013 when annual rainfall was always in deficit. He says they will have enormous spreading root systems and cutting them back will be better than planting a new tree with a small root system. I will lose the crops for a few years, but gain in the long run. He's not the first to suggest a hedge and it wouldn't cost anything. It's a simple enough matter of digging up volunteers and planting them in more suitable places. He says the more varied the species the better and the aim is to create a windbreak, that will lead to a microclimate within the orchard that will retain more moisture. The hedge would also be a biodiversity sink. According to him people greatly underestimate the ecological value of a hedge such as this.

Loire Valley Nature: A new entry has been added for the rare Ground-pine Ajuga chamaepitys, found occasionally in the Touraine on hot dry almost soiless limestone slopes.
A section for Violet Ground Beetle Carabus violaceus has been added to the Ground Beetle Carabidae entry. These big slug eating beetles are the gardeners friend both as adults and larvae.
Photos have been added to the Greater Butterfly Orchid Platanthera chlorantha entry. This common orchid is easy to see in the Touraine, often growing on roadsides.
Posted by Susan at 09:00

You can have Hawthorn, Oak [of mixed parentage!], Spindle and Dogwoods from here...
and, as it is happy in drier conditions, Bay Willow would look good too...
it is a native, but not often seen...
and the birds love the cover it gives.
[I don't... can't see the little divilz once they're behind the leaves!!!] ;-)
And it doesn't grow fast in dry conditions... I can root some for you... and some Pussy Willow.
And Pauline will probably be able to give you a filbert as a Hazel... and you can crop that as well.
Or plant it to crop and use the offshoots to put in the hedge.
We've also got rose aplenty!

I'm a little puzzled by the outside shutters. I understood that they were always inside, as they are in the châteaux.

I wonder if the shutters weren't added along the way and owners decided to keep them. The inside shutters on our mullion window fold back on themselves and are extremely easy to open (much more practical than outside shutters). We don't have have fragile windows to protect though :).

I think it's entirely likely that the model for the shutters in the photo is actually 19th century, copying the 16th century style. These shutters are of the type which are supposed to be fitted inside (see the hatch within the lower shutter on the right -- pointlessly non-functional except as a charming detail if the shutter is outside). Folding shutters such as yours began appearing in the 18th C I think.