Back in June we had lunch at the Ferme Auberge de la Lionnière near Mareuil sur Cher. It was delicious and we had a great time.


The simply furnished restaurant with its big windows overlooking the back garden. 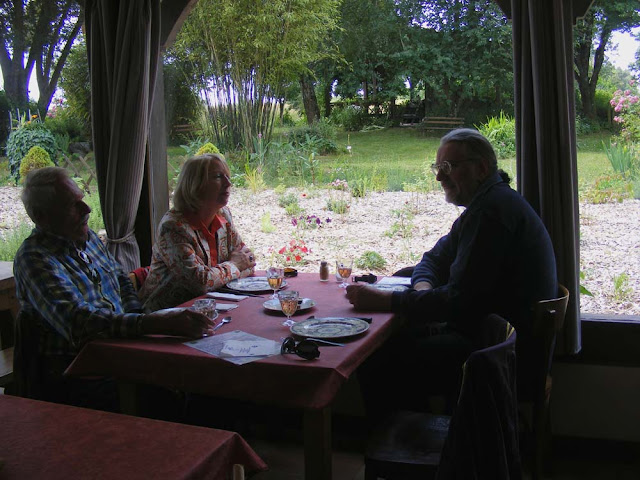 A ferme-auberge is a farm with a restaurant. The meals must be made from 75% produce that comes directly from the farm itself. When I rang Françoise Bouland, the owner and cook, to reserve a table she couldn't tell me what would be on the menu, or even exactly what the price would be. She serves a daily changing menu of a starter or two, a main, cheese and a dessert, with local wine. The price varies depending on what the meat of the day is, but is generally around €25 per head. La Lionnière is a goat cheese farm and they raise some poultry and lamb, therefore the meat is always goat, lamb or poultry of some sort.

When we got there she asked us if we would like goat cheese beignets (deep fried dumplings). She said it was only worth making them if we all wanted them and it would mean waiting a bit. We said yes and boy are we glad we did! We all absolutely loved them. They are not for those with limited appetite though. 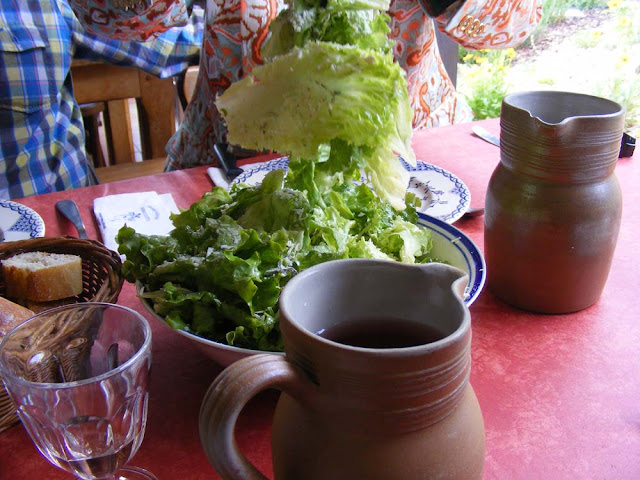 Before the beignets appeared we were given a green salad dressed with finely grated aged goat cheese. Also delicious, and worth trying at home. This salad reappeared after the main course, to accompany the cheese course.

The main course was guinea fowl, cooked in a rich and savoury wine sauce and accompanied by fried potatoes. Françoise apologised for the lack of vegetables. The garden had not been performing well and it was too early for green beans. I commented that I had a good crop of broad beans at the time and she said she didn't serve them in the restaurant because so many people don't like them. We agreed that clearly most people are crazy. 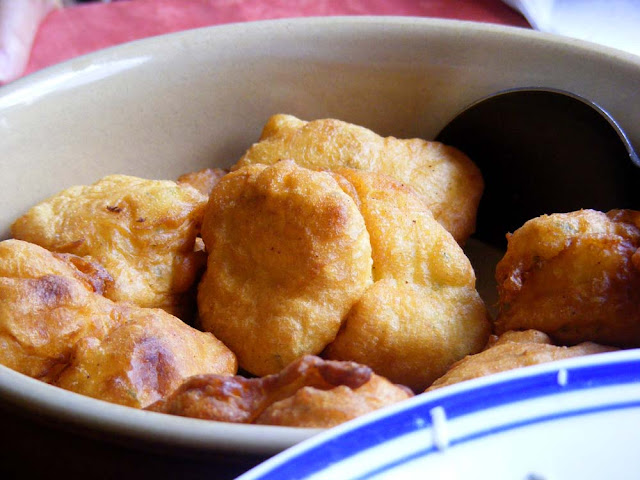 By the time we had eaten the guinea fowl we were stuffed to the gunwales, but it was all too delicious not to scoff everything she put in front of us. The cheese was three disks of their Selles sur Cher style goats cheese, of different ages. To be honest, I've forgotten what the dessert was, but I know it too was delicious. Being June it was probably something with cherries.

The farm is surrounded by vineyards, so the wine we drank was extremely local. Françoise grew up in Saint Georges sur Cher, a town full of winemakers on the other side of the river just down the road. When we mentioned the winemaker we were visiting there after lunch Françoise said to say bonjour. She had gone to school with his father.


Even after all the food we'd eaten before,
we managed to make quite a dent in the cheese. 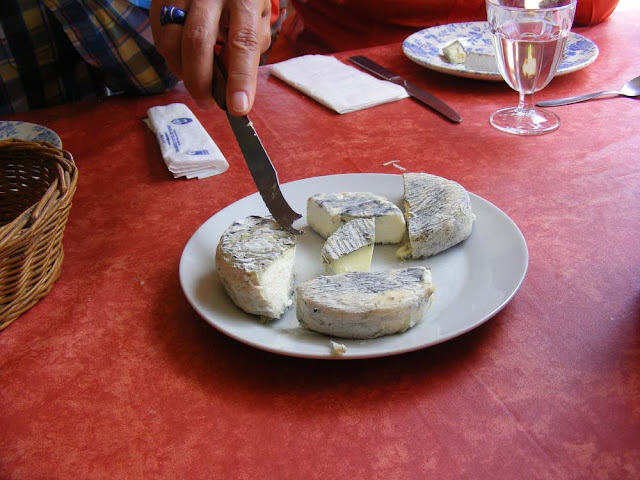 The goats at La Lionnière live an outdoor life. Françoise is adamant that cheese made from indoor goats is a pale imitation of the real thing. She also told us that they are winding down the goat herd and the cheesemaking. This will be the last year they make cheese and she and her husband are planning to semi-retire. They will continue to run the holiday accommodation and the restaurant, but the cheese served there will come from a cousin who lives near Preuilly sur Claise.

We would highly recommend the ferme-auberge as a friendly place to eat simple traditional French food. Booking by telephone is essential (and I don't think they speak English, or respond to email). They don't take bank cards, only French cheques or cash.

************************************************
Heritage at Risk: If you are planning to visit somewhere that is open this weekend 19-20 September for the Journées du Patrimoine please consider choosing one of the sites featured by Urgences Patrimoine or Patrim'Action. This year in the Touraine the focus is on l'Etoile Bleue, currently the home of the Jeune Chambre Economique de Tours (Young Entrepreneurs Association of Tours). The building is a former brothel decorated inside with murals and mosaics in the Art Deco style of 1925. The most notable of these is a series depicting a naked woman frolicking with a number of greyhounds (ahem...not exactly to modern tastes, but important local heritage nonetheless).

The wall paintings of l'Etoile Bleue are suffering from damp and although some conservation work has been undertaken, funds have now run out. Patrim'Action will be selling Tickets-Patrimoine to raise money for the project. Essentially these are a donation, but there will be a prize draw and the winner will receive a special private evening guided tour for themselves and three guests once the work is complete. Members of Urgences Patrimoine, including the wall paintings conservators who worked on it, will be there on the weekend to talk about the building and its historic value.

Urgences Patrimoine highlights buildings at risk all over France, Patrim'Action is a new association whose motto translates as 'Don't just look! Do something!' Some pictures of l'Etoile Bleue can be seen on the wall paintings conservator Sabine de Freitas' blog l'Atelier du Passé Présent. By visiting the sites they highlight you are supporting their work to make these places more known and appreciated, the first step to saving them for the future.

*****************************************
A la cuisine hier: Two Tartes Tatin, one for now, one for the freezer. To be perfectly honest I'm not a huge fan of tarte tatin, but Simon likes it and requested it. It is a very easy dessert, requiring no finesse whatsoever except in the matter of turning it out (a step which you can skip if it's just you and you don't need to impress anyone...). And it used up a couple of kilos of apples, which in this apple abundant time is a good thing. Also it is a traditional local dessert, the Sologne equivalent of Bakewell Pudding, supposedly invented by accident in the 19th century.
Posted by Susan at 09:00

I'm glad you enjoyed La Lionnière. We always have. We had lunch there back in April, I believe it was, and we had goat as our main course: kid in a mustard sauce. It was very good. The Boulands' farm is just three or four kilometers from our house, and I've heard them talk about retirement for 8 or 10 years now. Maybe they will do it this time.

Saint-Georges, BTW, is on the same side of the river Cher as Mareuil is...

Is Mareuil really on the same side as St Georges? In my brain they are on opposite sides, I don't know why. Simon can't believe I get this sort of thing wrong so often. It comes very easily to him.

The problem I have in France, and I had the same one in California, is realizing that the ocean is west of us. Having grown up on the U.S. East Coast, the ocean was always to the east. And that was what gave me my notion of north vs. south. It's very easy for me to get confused here about which way is north and which way is south. And yes, Saint-Georges and Mareuil are both on the left bank of the Cher (that's the south side).