In June Tim and I spotted a large winged brown and yellow insect sitting quietly on a nettle leaf along his millstream. Hornet Vespa crabro! But no, not quite right. Must be a Volucella sp hover fly, which are hornet mimics. Wrong again! Closer inspection revealed four wings, so it had to be hymenopteran (a wasp, bee, ant or sawfly). Neither of us had ever seen anything like it before, but our money was on sawfly, and female. And so it proved to be. 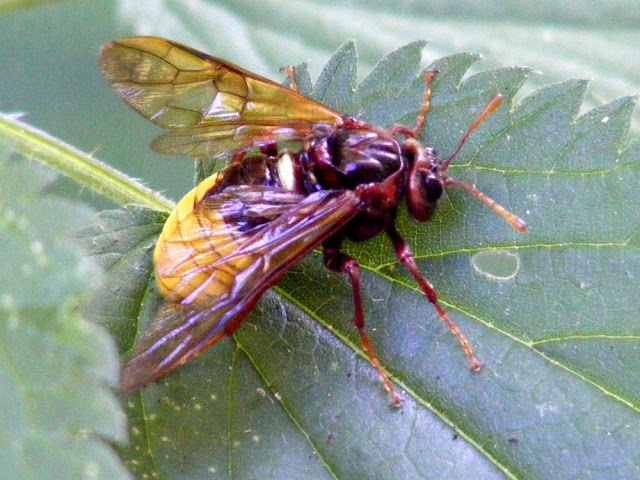 Looking in Chinery revealed some members of the family Cimbicidae which looked similar but not close enough to be our beast. A little digging on the internet and some time learning how to distinguish two very similar species and we had a proper name. 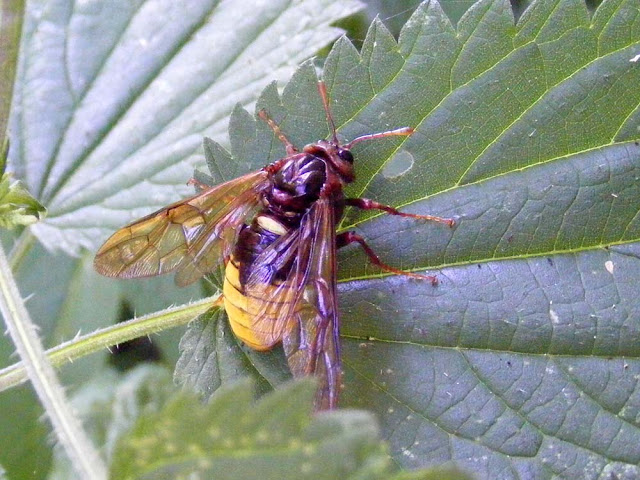 She is a Large Alder Sawfly Cimbex connatus. This is by far the biggest sawfly I've ever seen. The species is found around alder Alnus spp trees, and perhaps hawthorn, in the summertime. The green caterpillar like larvae, which grow to 50 mm (that's really big for a sawfly!) eat the leaves of alder trees. There are plenty of those along the river at Tim's place, so it was in the right place at the right time.

Sawflies, unlike their hymenopteran brethren in other groups, have no weaponry to defend themselves -- no stings, no powerful jaws, no squirty acid. Thus, they often rely on camouflage or deception to stay out of harms way. 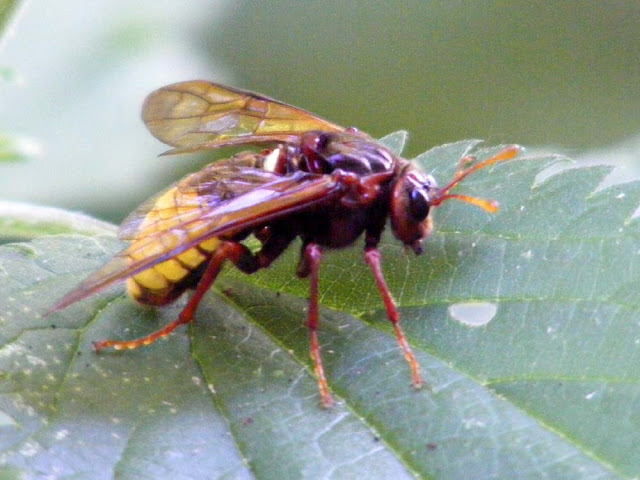 This species shows the typically deeply furrowed thorax of a sawfly. Cimbex spp also have clubbed antennae (which tell you that it is not the hornet it is mimicking) and a creamy white first abdominal segment. C. connatus has a dark underside, a dark dorsal line down the abdomen (not always very marked), and a downy scutellum.

You missed Melissa out of the above list....
she came into the barn as I was working in there, the other day...
given the time of year and all the fruit about I did look twice to make sure it was her...
I was up a ladder at the time and didn't really want an 'Ornet buzzing around me!

But, Melissa really has the Hornet's buzz and some mannerisms...
I know we ruled her out in the above instance, quite quickly...
but she was in with a chance initially!!
Pug ugly as she is, poor girl.
Tim

Lovely photos of the Large Blue. I'm sure you must do all you can to encourage
the growth of wild oregano in the orchard.

There's no oregano in the orchard and I don't know why. It flourishes on the other side of the stream. I've waited to see if it will appear of its own accord, but I think the time is coming to transplant some. Of course, if I don't have the right ants, I still won't get baby Large Blues.