Nearly 500 years after its construction, this emblematic Renaissance building has not yet revealed all its secrets.


The tower looms over the old town centre. 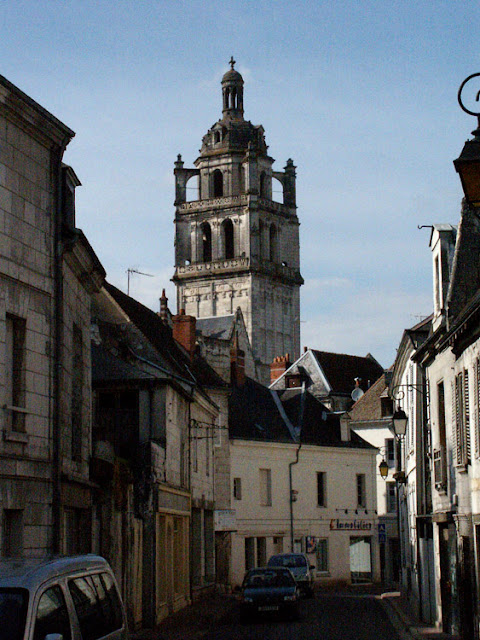 The 52m tower has overlooked the town of Loches for half a millenium. Usually open 2 days a year, for the Journées du Patrimoine, it offers a unique panorama from the top. To get there you have to open a heavy wooden door, then puff and pant your way up the 143 dusty, narrow steps. But once you get there the story of Loches is laid out before you, in slate and terracotta.

The tower from the flower market. 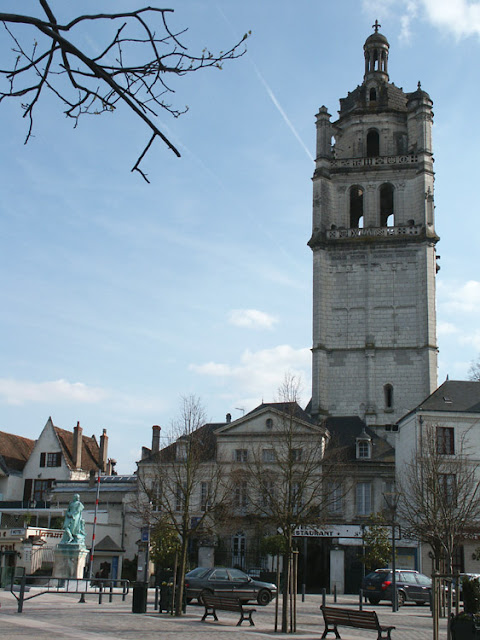 One of the mysteries yet to be solved is the tower's original function. It was erected in 1534. It's clearly a belltower, but was it for a church, was it an alarm, or did it cover both functions? The dual function seems unlikely given the competitiveness between the church and the municipal power during the 16th century. There was a chapel at the foot of the tower, but the motifs which adorn the tower are secular, relating to the municipality, such as the fish which are a symbol of the town of Loches.


The tower photographed from the Logis Royal. 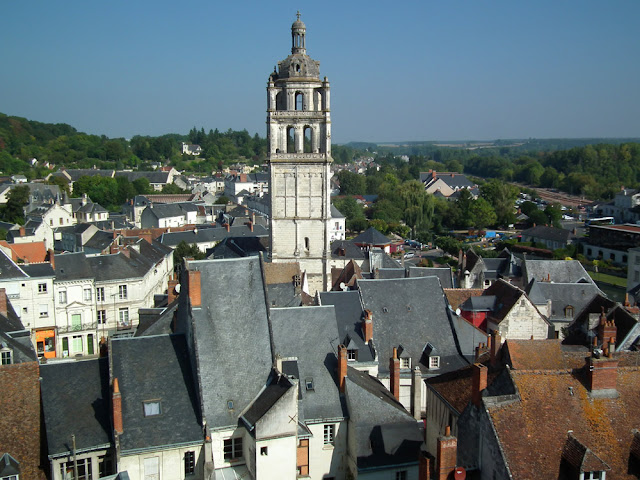 ************************
Au jardin hier: With the very windy and squally weather we've been having it was time to ramp up the apple harvest. Yesterday I stripped the Melville, which is our second largest and most productive apple. The mystery Ballerina, the mystery cream and pink crisp apple and the Jonagored had all more or less been stripped by the wind so I picked up the useable ones. The few Granny Smiths that didn't drop in the dry are hanging on grimly and I've left them. The Reine de Reinettes need stripping but I've already picked lots of them so they are a lower priority. The Golden Delicious and the Canada Gris need to be picked but I didn't have the space or the time yesterday. The problem with the wild gusty wind is not that the apples fall off and get damaged -- the grass underneath the trees is soft and cushioning and so long as they are picked up within a day of falling they are fine. But if they stay on the tree they get damaged by being whipped around and hitting twigs and branches. At home the apples have been sorted into three categories: perfect ones for the fruit bowl; small and/or misshapen for things like jelly where no peeling or coring is required; and cookers for desserts. I left a lot of the 'small and misshapen' ones down at the orchard, so the 'cookers for desserts' is by far the largest quantity stored in the pantry waiting to be processed. Tarte Tatin is next on the list I think.

The Black Hamburg grapevine has suffered some damage in the wind, with one section coming loose from its trellis and some bunches dropping to the ground. They are ripe enough to pick but not at their peak yet so I just picked a few bunches.

I picked a few blackberries and immersed them in strong liquor (home distilled by friends of friends). This is the beginning of making a small batch of blackberry liqueur.

We are now cutting out the immerion stage....
I juiced a bunch of blackcurrants and mixed the resultant 800ml with 700ml of 40% brandy...
added a couple of tablespoons of sugar [to our taste] and put it back into two bottles...
voila... instant cassis... and there is NO difference in flavour.

I will now... slowly...
there are quite a few...
decant all the Le Parfait jars produce and bottle...
but before that, do a batch of mure the above way.

In my opinion, if this tower is called that way, it means it was part of a Saint-Antoine church which disappeared at some point in time. Who knows what happened to the church. Was it destroyed by fire, as was often the case, or demolished for some other reason? The belltower was preserved and kept standing to be used as a belfry, a very useful structure in those days.

Tour Saint-Jacques in Paris is an example of a church bell tower preserved after the church, Saint-Jacques-la-Boucherie, was demolished. my opinion, if this tower is called that way, it means it was part of a Saint-Antoine Church which disappeared at some point in time. Who knows what happened to the church. Was it destroyed by fire, as was often the case, or demolished for some other reason? The bell tower was preserved and kept standing to be used as a belfry, a very useful structure in those days.

Tour Saint-Jacques in Paris is an example of a church bell tower preserved after the church, Saint-Jacques-la-Boucherie, was demolished.