This year for the Journées du Patrimoine (European Heritage Weekend) instead of visiting rarely opened historic buildings we decided to participate in some historic recreation. Along with friends Colin and Elizabeth and Tim and Pauline we registered ourselves and our classic Citroëns for the Heritage Traffic Jam at Sainte Maure de Touraine. 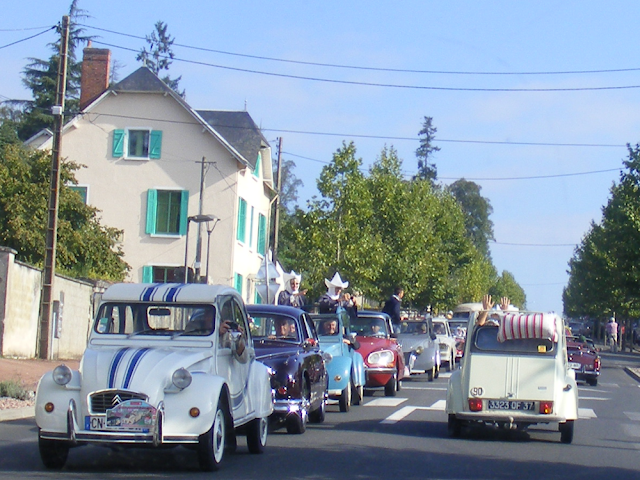 This was open to anyone with a car older than 1974 and our friend Fabien was one of the organisers. Participants were asked to accessorise their cars and themselves so that the event recreated the look of a weekend in August before the town bypass opened. In the 70s and earlier the N10 (national highway 10) went straight through the middle of town. Everyone heading south from Paris for their summer holiday (or north on the return journey) passed through. 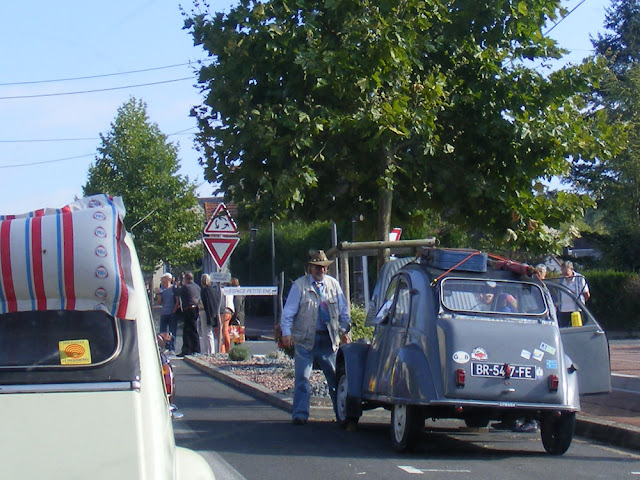 This regularly led to gridlock, with cars overheating and breaking down. It's long enough ago now though that people who remember going on holidays like this as kids look back with nostalgia not horror. Thus, a movement has been born to recreate the holiday scrum.


Not one of the cars you can see in this picture is less than 40 years old. 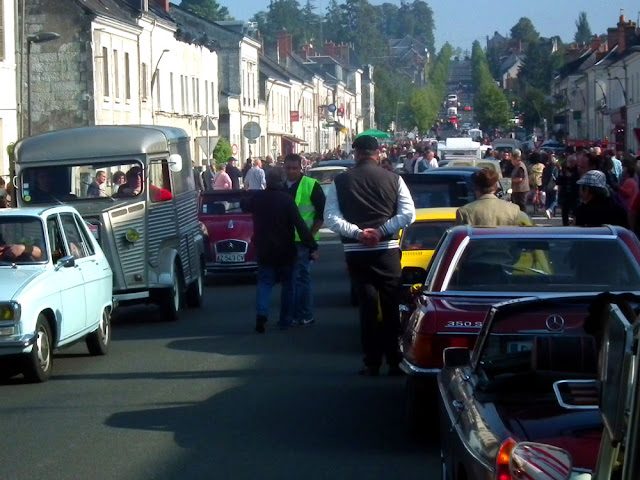 It certainly brings out a wide variety of cars and a good deal of the French delight in dressing up and play acting. Policemen, postmen, cyclists, stressed out couples, hippies and hicks all featured and entertained the amazingly large crowd who gathered to photograph and enjoy the spectacle.


Some of the 300 classic cars in the centre of Sainte Maure de Touraine. 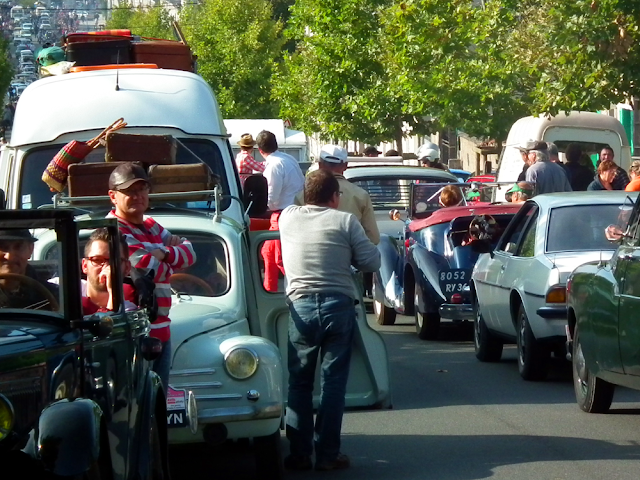 Now there is a bypass the centre of Ste Maure can be closed off to regular traffic, allowing the classics to stop-start their way up and down the old N10 in the centre of town. Some vehicles had more difficulty than others negotiating the new fangled roundabouts, so progress was rarely smooth. That was fine. It all added to the authenticity, and if there was a blockage, everyone just stopped and got out of their cars -- just like the old days. We chatted with passers by, both strangers and acquaintances. We took gazillions of photos and some movies.

Sorry about the reflections - the camera rig was tested with the car pointing the other way...

Half way round the first circuit Tim applied his handbrake a little too vigorously and the handle came off in his hand. Fortunately he had some chocks for the wheels and pulled over to the side to bodge a temporary fix. By the time we got round to him again he'd tied the handbrake cable to a rope and attached it to the windscreen wiper knob or something. At any rate, he and Pauline and their 2CV rejoined us and we went off to have a picnic lunch at the local campsite.

After lunch we strolled through the camp, where the really keen retro enthusiasts had set up their period caravans and tents and spent the night. Then we bid farewell to Colin and Elizabeth and followed Tim and Pauline home just to make sure nothing else fell off their car and they got back safely.
Posted by Susan at 09:00

Email ThisBlogThis!Share to TwitterShare to FacebookShare to Pinterest
Labels: Events, The Car and Driving, Towns and Villages near Preuilly

"Merde" was not the word!!
It was a variety of somethings an eff-sight stronger...
and a lot of them!!
Repeated frequently!!

But all 2CV owners carry ropes, baler-twine...
preferably blue or orange... must clash with paintwork....
cable ties, extra wire, wire coathangers, etc.
We were, however, fresh out of coathangers and extra wire!!

A handbrake, however, only needs to be on when parked...
I should have borrowed a self-locking main-sheet cleat from that boat that was going up and down...
that would have saved wrapping the rope around the air-conditioning knob...
and made a neater job!

Still, t'was a fabulous day out... and our breakdown wasn't a cameo...
and drew all sorts of French expressions from people who I showed the handle to...
and "merde" came out quite often....
as did the "costya" sound of air being sucked in through clenched teeth...
so probably from electricians, plumbers or car mechanics!!

Thanks for the escort back...
for a just shy of 60 years old, Gytha moves quite well, doesn't she....

I purchased the necessaries yesterday to do a proppppa repair...
so, I shall start that in a few minutes!
T

It was a fabulous day...

Sounds like a fantastic day out. Better not show Tim (B) or he will be yearning for a classic car. Our TT is 2003 so has quite a few years to go!!