It's difficult to know what to make of Henri III. Physically he greatly resembled his father Henri II, being tall, dark and handsome. But in terms of behaviour he was utterly unlike any of the other Valois men of the Renaissance. They were all macho sporty types who loved hunting and jousting, even when their health wasn't good enough to safely participate. His grandfather, father and brothers, all kings before him, restlessly travelled the country, meeting their subjects and engaging with them both formally and informally.

Henri III on the other hand was fastidious to the point of obsessive and hated encounters with hoi polloi. He loved jewels and luxury cloth but hated dining in public. He was so concerned with personal appearance he was considered effeminate, and he rarely went hunting. He disliked travelling so avoided royal progressions whenever possible. He liked to read and was an eloquent speaker. He was an elegant and skilled fencer and a capable military leader in his youth.


A particularly nice portrait of Henri as a young man, by François Clouet, hanging in Louise of Lorraine's 'bedroom' at the Chateau of Chenonceau. 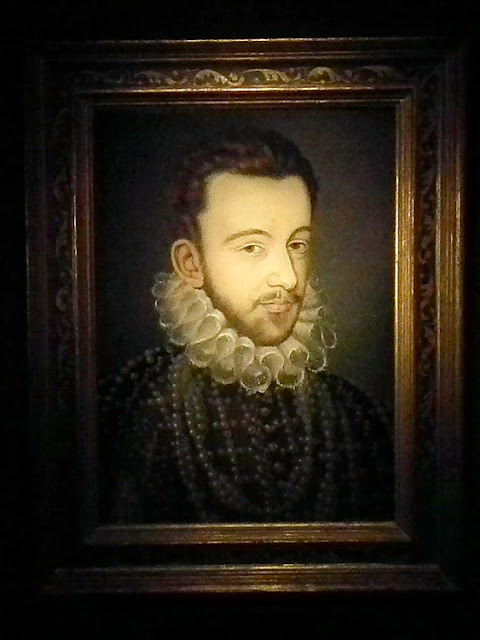 He doesn't seem to have cared much what other people thought. He was intelligent and educated, but eccentric and his personality led him to extreme behaviours which persisted for a while, then he moved on to the next thing. The opportunity for extreme religious fervour was always there in the late 16th century, and he was able to get carried away in typical fashion from time to time, with flagellations and ascetic retreats.

At the time of acceding to the French throne he was unmarried, although already 24 years old. His subsequent choice of wife was very curious for the time. He could have married anyone in Europe but he had fallen head over heels in love with Marie de Clèves, a beautiful young Catholic woman married to a diehard Protestant, the Prince de Condé. He had hoped to obtain a divorce for Marie and marry her himself but she died before he could set it up. To console himself and because as king he needed a wife he chose to marry Louise de Vaudémont, who had grown up in the household of his sister Claude, the Duchess of Lorraine. She came with no dowry, more or less abandoned by her parents. But she was sweet tempered and physically resembled Marie de Clèves. She adored Henri and he fussed over her like she was a favoured child. He didn't want a wife who he could talk politics with -- he had his wily and experienced mother Catherine de Medici for that, and besides, politics bored him.


Portrait of Henri III hanging at the Chateau of Blois. 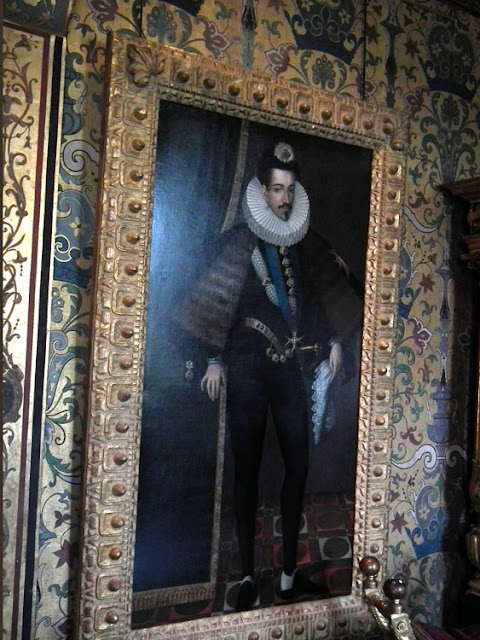 He surrounded himself with a group of young men who all aped his manners and dress. When any member of the group died he was distraught and unable to function for days. This behaviour led even at the time to stories that he was homosexual. Nowadays it is impossible to separate stories which were peddled to destroy his reputation for political reasons and stories which are true. He certainly had well known female lovers in his youth, but it seems to me that stories of his homosexual activities are contemporary attempts at scandalmongering and modern misreading of mores. In other words, the boundaries and sensibilities were different in those days.

France in the 16th century was still to a large extent a warrior society. Soldiers (men) formed open and close bonds of comradeship. Henri, being the extreme personality that he seems to have been, simply expressed this bond in a more extreme way. The members of his circle of mignons as they were known were all from the second rank of the aristocracy. He could be top dog and they were glad to be part of the chosen few.


Another version of the portrait above. This time his ruff has been
swapped for a soft rolled collar, which he adopted when older. 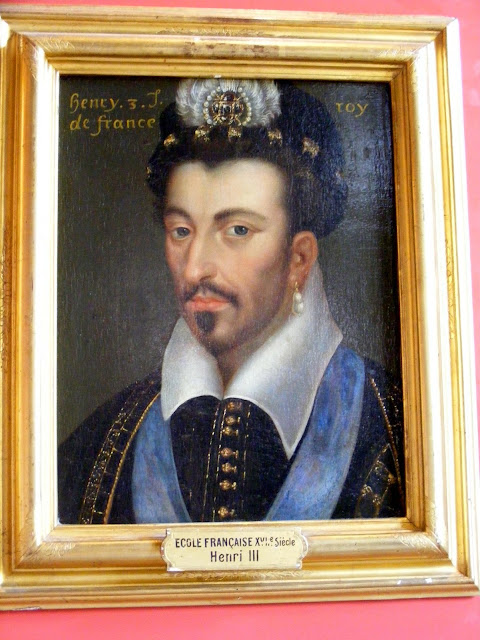 His eccentric and erratic behaviour destroyed his reputation. The general populace thought he was a laughing stock and the Protestants despised him. Both Henri de Navarre and Henri de Guise, leaders of the Protestant and the Catholic factions respectively were both more charismatic and more popular than he was. Finally he ended in the peculiar position of being a Catholic king having to ally himself with his Protestant opposition in order to try to contain the fanatical Catholics. This led to a disasterous political decision on his part when he arranged to have Henri de Guise assassinated.


Portrait medallion of Henri III at the Chateau of Chenonceau. 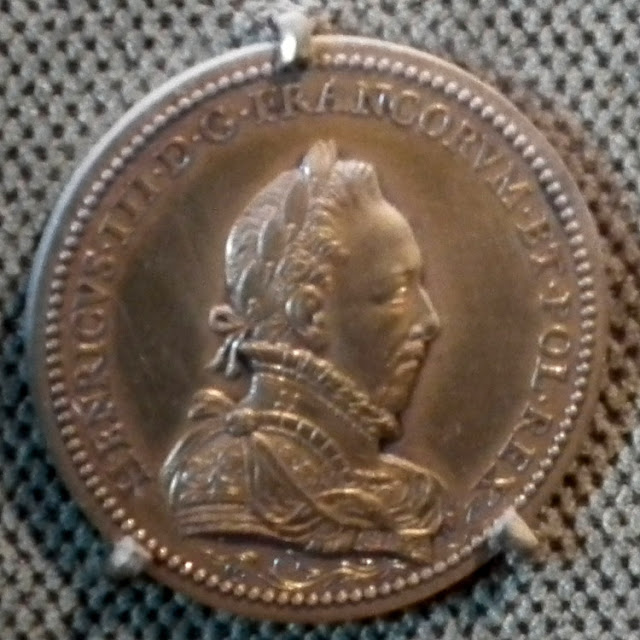 The end for the now rather pudgy Henri III came ignominously at the age of 37 whilst laying seige to his own rebellious capital. Seated on the toilet, wearing nothing but a loose robe that he had half thrown off, he signalled a monkish messenger to come forward and deliver his communication. The monk plunged a dagger straight into the king's guts. Henri pulled the weapon out thinking to defend himself, but made the wound worse. His guards hacked the monk to death and Henri was carried to his bed. He had time to write a reassuring note to Louise, who was at Chenonceau, but he died in the early hours of the morning.

He was the last Valois king of France. In the beginning the most promising of Catherine de Medici and Henri II's sons, sadly he is remembered as a selfish and incompetant monarch, largely responsible for the chaos, intrigue and danger of his reign. This view of a complex and contradictory character naturally overshadows positive legacies such as his introduction of better sanitation systems and the table fork to France. Despite his eccentricities, some of his fastidiousness rubbed off permanently.

Remember I wrote about Bruce the Maremma recently? Well it seems that his fellow guardian dogs are being used in a thoroughly appealing and innovative way on an island nature reserve off the Victorian coast of Australia. Also, who wants to join the Fairy Penguin knitting project?! Irresistible, surely? UPDATE: Simon has found this blog post on the current requirements for penguin sweaters ie the original project was a response to an oil spill crisis, the current project is for fundraising and the sweaters go on toy penguins.
Posted by Susan at 09:00