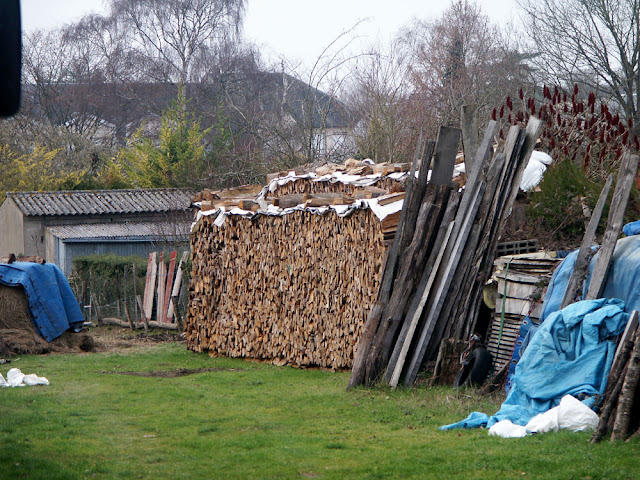 Whilst the market for lumber has stagnated, with prices not having changed for 30 years, the market for wood as a bio-fuel has really taken off in the last few years.


Firewood in the Forest of Preuilly. 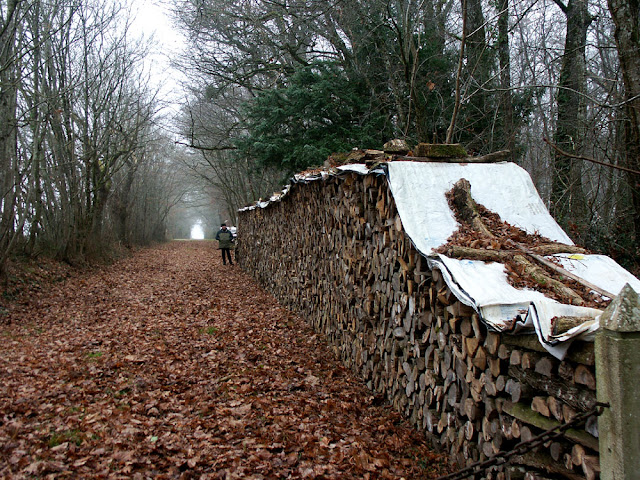 This has led to concerns expressed by the President of the Union of Private Foresters that without a unified management plan the Touraine risks deforestation. He has told his 440 members that if they opportunistically cut their woods for fuel without succession planning, bio-fuel is a mirage. Wood has already been in short supply for several years.


A parcel in the Forest of Preuilly managed for both lumber and firewood. 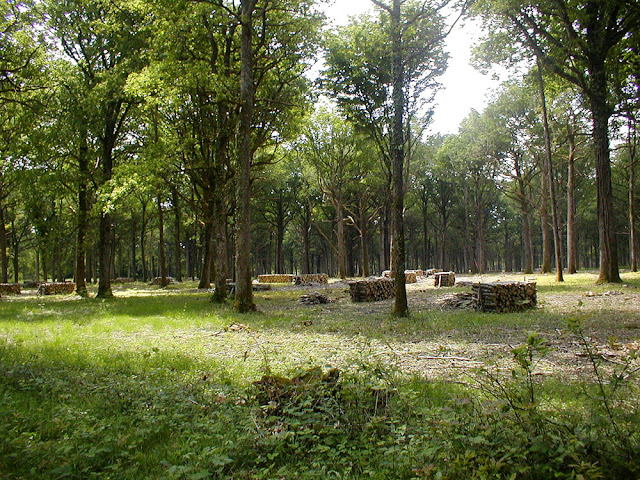 The development of power plants using wood-chip (Saint-Pierre-des-Corps, Orleans that partially serves the Touraine, and soon Descartes) led some owners to develop coppice which allows a high rotation (the trees are cut every five years). Long term though it exhausts the soil because it consumes a lot of nitrogen. The president of the Private Foresters Union, Antoine Reille, believes that this production is not well managed and wood that is still wet is often being burned. Although he doesn't say so, I suspect that there is also a problem with much smaller diameter wood now having a commercial value and being removed, whereas before it would have been left to rot and replenish the soil.


A parcel of young oak trees in the Forest of Preuilly. 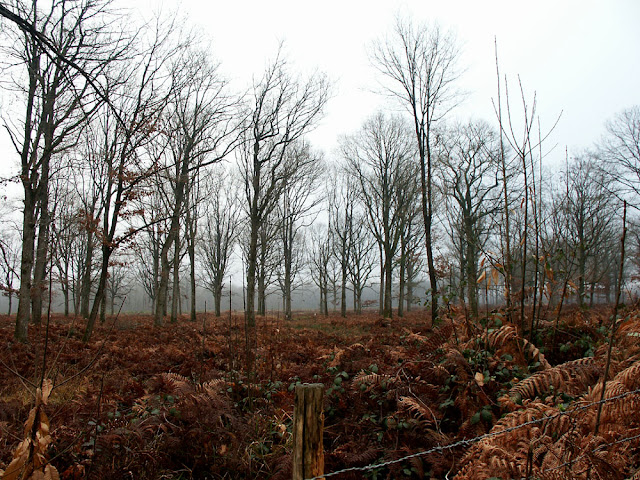 Reille is not ignoring the delicate balancing act required to ensure cash flow in the short, medium and long term. Coppice will make useable firewood in 25 years, a standard oak tree takes 80 years. But he feels that the market is only going to expand and there should be a sensible overarching management plan for the private forests.


A walking trail in the section of the Preuilly Forest put aside for leisure activities. 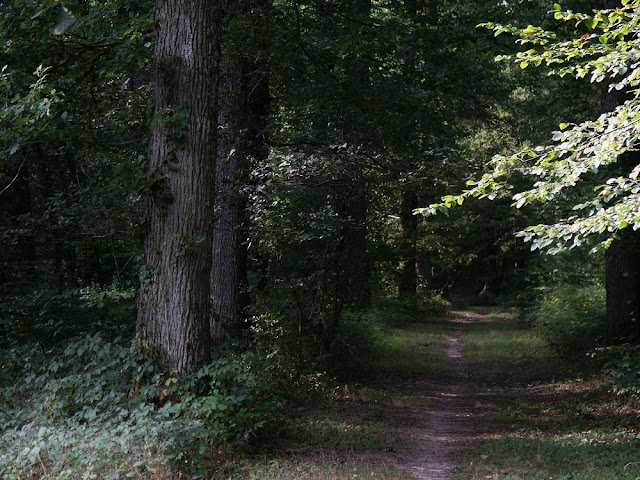 The Arbocentre Wood Energy Sector Manager is more optimistic. He acknowledges how tempting it is to seize the opportunity offered by bio-fuel. He believes the way forward is to set up a simple management plan and code of forestry practice. Included in this must be plots that are currently being stripped bare with no succession plan and profits must be reinvested in the forests of the future so there is no risk of deforestation.

He also thinks the demand for bio-fuel will slow down. At the moment the three power plants consume 30 000 tonnes of wood and don't have much potential for increasing that. In addition any increase won't be at the sort of rate the foresters have experienced in the recent past. The market took off very rapidly but it's a recent phenomenon of only 5 years. The evolution will be slower.

I should point out that all the photos here were taken by us in the Forest of Preuilly, which is mostly managed by the very professional Office for National Forests and none of the issues discussed above apply. Also probably none of the wood shown above will be destined for wood chip, it will be to supply private households with wood burning stoves. There are private parcels in the forest though and I can't vouch for the management approach to all of them.
Posted by Susan at 09:00

I read the NR article with some concern....
you mention above....
" led some owners to develop coppice which allows a high rotation (the trees are cut every five years)"....
there are some "errors" in the reporting....
probably because the journalist didn't have M.Reille's vocabulary and tried to get the key points across in a long NR article...
that would have probably needed several pages...
or one of their pull-outs!

The only woods that can be coppiced on a five year cycle are hazel, alder and my favourite... willow...
but none of these are trees that like forest growth...
hazel is a plant of clearings and wood edges.... alder and willow are wetland species, like poplar.
If anyone tried to manage the woodlands to produce coppice on a five year cycle with the current local mix of oak, hornbeam, sweet chestnut, etcetera.... all they would be getting at five years is pea sticks.
Twenty-five as stated above and you would be getting sizeable timber from these trees....
but still less than 10cm diameter... and only for about the first three metres.
And it won't be as highly calorific as mature timber, it just isn't as dense at these sizes!!

They are stripping out poplar at the moment in this valley...
and replanting with the same by the looks...
that is a forty to fifty year cycle to get saleable building timber.....
if they'd leave the stumps to coppice, they'd get a harvestable crop for woodchip in 10!
If they planted Crack Willow [S. fragilis] they'd be able to harvest in five...
calorifically, they are the same by volume...
but if they went down the commercial willow route...
they'd be "advised" to plant Continental Purple [S. daphnoides]...
because that is the "accepted" biomass cropper...
it isn't... my 20 here rapidly went down to nine...
and they are 1" diameter spindles after eight years....
all the Crack Willow from the original trognes that were planted at the same time are now 3" to 4"!!
Plant Crack Willow!!
Also, in the UK, the accepted cropper is White Willow [S. alba]....
it is good, but not as good as Crack on damp ground....
permaculture / self-sufficiency people use Crack Willow more than any other.
But, naturally, being "alternative", they are clearly nutters and know nought!!

The more worrying thing is, as you put above, the removal of what was normally left...
this is a French practice... in the UK it would be gathered into piles and burnt...
here, I am adopting the French method, it is better for the wildlife!!
But, what is left in a mature deciduous plantation, will be a very small fraction of the return to the soil compared to the leaf fall...
and that difference gets smaller from 25 years to 80! Here, I don't follow his fear...
Go below 25 years, then there will be a problem.
Now, read on...

However, traditional coppice hasn't had that problem...
because the wood was harvested on site, stored on site and the twiggy bits left where they stood as bush....
all the traditional coppice timbers are trees of poor soil...
in fact most timber is grown where it is either soil that is too poor to crop commercially in "farming" ways...
or too inaccessible...
I've planted trees for timber on a 1 in 3 slope, using my mattock to climb with!!

With the current stripping and conversion to woodchip, mainly here by the guy at Paulmy....
it is all done on site and the woodchip transported away by tractor....
he needs to lose all the moisture from leaves...
else he'll have a huge compost heap and not saleable woodchip...
so we get these piles of "lop & top" lying about....
along with non-value logs and semi-rotten timber.
The collection of the semi-rotten timber is a concern to us as naturalists...
it may well have been laid in!!
Where the piles remain and are processed on site, the dust from that processed wood...
and the minced-up leaves, will remain there...
Where it is removed, the "leav"ings will remain to rot down where it is stored...
removing just that bit of nutrient from the original area.

The big benefit will be to the understorey wild flowers, however...
and we, as naturalists, should see an increase in diversity there...
and in the increase of habitat for small birds and mammals because of the initial density of the growth...
we've seen the latter here in a space of eight years!!

NB: The huge CHP plant at Descartes, if it gets off the ground....
is calculated to use 200,000 tonnes of material per year for maximum efficiency...
only 10% of which is going to be waste from the paper mill itself...
the rest will be "sourced"!
As I have seen NO stands of quick growth material being planted...
Here, I, like M. Reille and theArbocentre Wood Energy Sector Manager, am worried....
and an additional concern for all of us, locally, is the transport of that material!!
Part of the reason I am planting quick return, low calorific timber is to augment what we buy...
and, for a while, offset the inevitable price increase in "Bois" for domestic burning!!
The other is diversity, diversity, diversity!!!!
I am leaving stuff to rot down...
and this is where the LPO amongst other should put its head above the parapet!!
Tim

Thanks for all this extra info. It really clarifies and adds to the post in a really helpful way.

Thanks Susan,
I could have turned this into a post....
but I felt that linking it to yours would have divorced the two sets of info...
this way they stay as one for those who want to know.