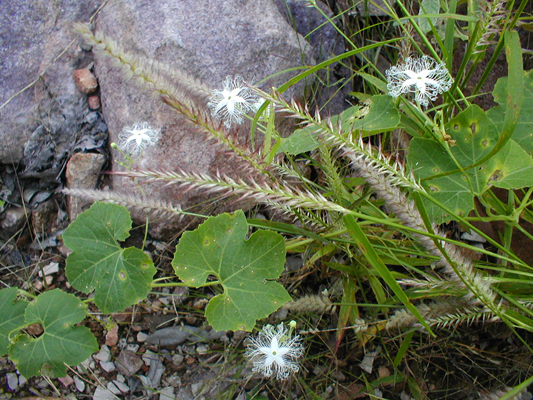 At the time of photographing this pretty frilly white flower with its vine-like leaves on the top of the cliffs above the Katherine River in the Northern Territory I was told it was Stinking Passion Fruit Passiflora foetida, but it clearly isn't. It took me quite a while to identify it, and it involved switching Google to .au rather than .uk, which is our default. It's amazing how much difference 'switching countries' makes to internet searches. Hurrah for the Top End Native Plant Society website, which enabled me to identify this plant just by scrolling through their gallery of white star shaped flowers.

The plant is Trichosanthes holtzei, no English name although keen native plant gardeners in the Top End seem to grow it. Trichosanthes spp from other parts of the world are generally known as serpent gourds. It's a member of the curcurbit family. Perhaps the confusion about the identity in the field arose because Trichosanthes holtzei leaves apparently have an unpleasant odour when crushed. It is endemic to the Northern Territory, Cape York Pennisula and North East Queensland, growing in vine thicket, monsoon forest and drier, seasonal rain forest.

*****************************************
A la cuisine hier: Simon made a big batch of tomato sauce. We didn't grow the ingredients. The tomatoes came from friends of friends and the zucchini came from Tim and Pauline. The FoFs also gave us peaches, a cucumber and some beans (not green but the sort you let mature and pod, then cook just the fresh seed). T&P had given us in addition some superb green beans, but they've been eaten now.

I cooked up another batch of apple jelly, 8 more jars for the pantry.
******************************************
Orchid News: The last orchid species of the season has responded to the recent rain and popped up to flower. A close inspection of John and Alice's lawn revealed 3 little Autumn Ladies Tresses Spiranthes spiralis flower spikes. Not many, only about a tenth of the orchids in this colony, but more may appear yet.
Posted by Susan at 09:00

At first glance it looked like the Pennisitum had white flowers at the tip!
Australia is plain wierd... you've only got to look at these flowers to see that!
But...
more importantly...
what about your Ladies Tresses??

Such a lovely flower!

Nothing showing as yet for ALT in the orchard.