The other day I was in our garage. There is a bucket half full of sand in the garage, left over from mixing up potting mix. I happened to glance into it and noticed a black and yellow stripey insect, obviously dead but in good condition, just laying on top of the sand. Aha I thought. A wasp. My interest was piqued because it clearly wasn't a regular wasp. I picked it up and discovered it wasn't a wasp at all.

The creature turned out to be Plagionotus arcuatus, a type of longhorn beetle Cerambycidae. The species doesn't have an English name but in French it is called le Clyte arqué. 'Clyte' refers to the particular taxinomic tribe of longhorns it belongs (Clytini) to and 'arqué' means bowed or arched, clearly a reference to the shape of the yellow markings. 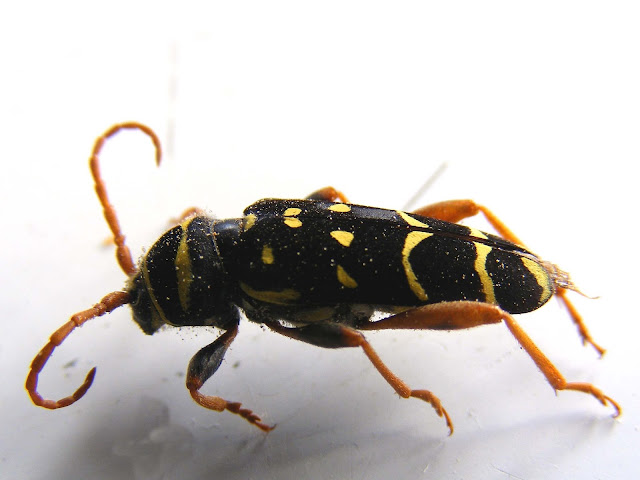 The beetles can be anything from 8 to 20 mm in length. Mine is at the larger end of the scale, measuring 17 mm long. It is lustrous black with bright yellow spots and stripes. The legs and antennae are orangey brown. Apparently they like to hang out in the sunshine on dead oak and beech. Even dead their colouring makes them look like wasps, but to add to the effect in life they move like Vespula spp wasps. This is known as Batesian Mimicry, where a harmless species evolves the characteristics of a dangerous species when both have a common predator. The idea being that the predator thinks twice about attacking the harmless species, giving it the opportunity to escape. This phenomena is named after the 19th century English naturalist Henry Walter Bates, who described the process from observations made in Brazil.

The larvae eat the wood of freshly cut oak and beech, so I assume my beetle emerged from our firewood. The adults can be seen in France from May to August. The species was evaluated in 2010 for the IUCN European Red Lists, but is not considered at risk (listed as 'least concern').

It is indeed a very attractive beetle. I've got it sitting on my desk still. I think people like you and I are so tuned in to seeing these things it seems easy and we've done it for years. The deception is good, but never quite right and an insect that doesn't look quite right, a bit different, will always attract attention from me even if it fools a hungry predator :-)