This bronze culverin (Fr. couleuvrine, meaning snake like) was made by Andri Brasseux in 1568. It's a type of small cannon which fired solid shot (ie cannonballs), in the days before shot became explosive in its own right. Brasseux may have been a local whitesmith (Fr. potier d'étain) as the culverin is inscribed 'ANDRI BRASSEUX, POTTIER DETEN FETTE SETTE PIESSESY SIMON DUFOUR SOLLICITEUR 1568'. I interpret the inscription as saying 'Andri Brasseux, whitesmith, made this piece, commissioned by Simon Dufour, 1568'. Whitesmiths work with tin and pewter, mostly making domestic vessels and implements. Some of them would have understood the process of making tin alloys such as bronze but normally they worked with metals cold (unlike blacksmiths). 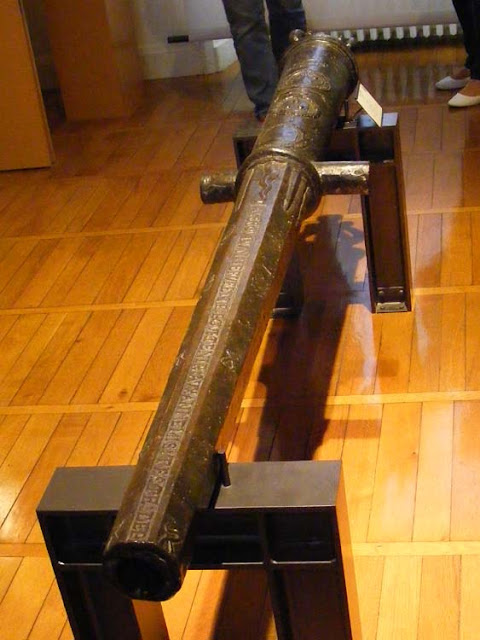 Further inscriptions on the cannon indicate it was modified in 1751 and again in 1774. It also shows the arms of Issoudun, the names of the governors and the arms of Charles de Barbançois, Seigneur de Sarzay.

Charles Barbançois came to Issoudun in 1562 to lift the seige of the town which was occupied by the Protestants.  In recognition of his services the King Charles IX named him lieutenant general and commander of the troops in Berry, then governor of the town and chateau of Issoudun.

The cannon, with its multiple inscriptions is a veritable history of the Wars of Religion in a single object. It comes from the town ramparts of Issoudun.