We like to post photos of one of the many magnificent displays of cyclamen flowering in the autumn in the Touraine every year. This year the featured flower carpet belongs to our friends Yvonne and Edouard, who live over in Pouplouroux on the other side of the Claise to us. Pouplouroux is a sort of suburb of Preuilly, on the hill as you come into town from La Roche Posay or Yzeures sur Creuse. 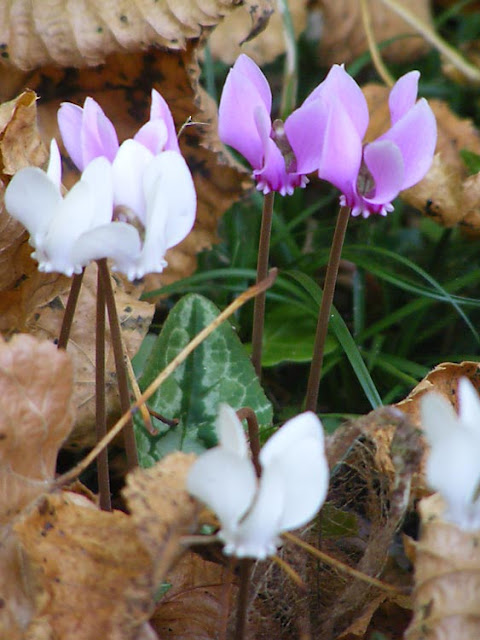 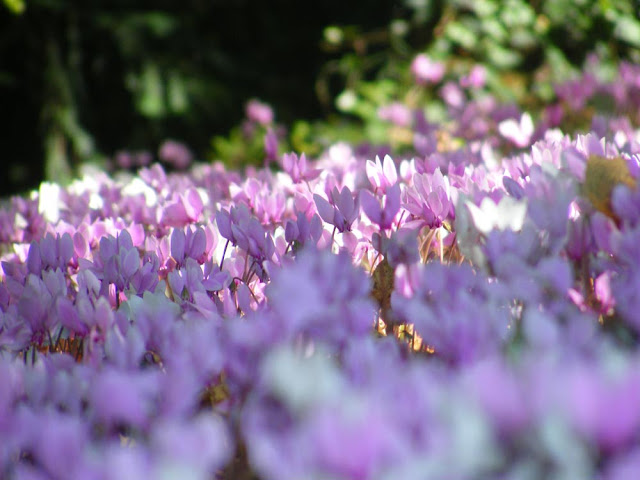 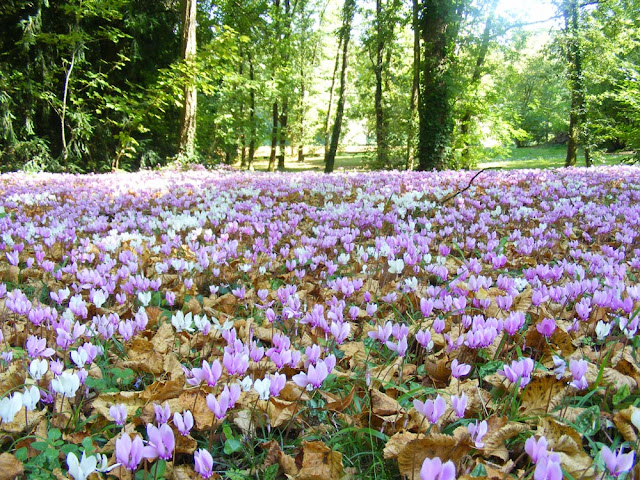 In the course of our conversation when we visited on Wednesday Yvonne revealed that she had seen two wallabies in a field between Yzeures and Preuilly not long ago. It's a field where she often sees deer as she drives by, so the green pick must be good. My guess is they are escapees from La Haute Touche, the National Museum of Natural History's captive breeding facility which is not far away. Apparently there is a mob of wallabies in the forest at Rambouillet near Paris she tells us (this newspaper article in English confirms the story).

************************************
Harvest Mites: The photos you see above came at some personal cost. We are both covered in harvest mites (Fr. aoûtats, known as chiggers in America). These microscopic mites clamber up their host from the ground and bury themselves in the skin making the itchiest welts ever. I have 'bites' behind both knees, around the line of my underpants leg elastic, on my shoulders where my bra strap crosses and worst of all, a more or less complete line under my breasts and circumnavigating my body along the line of my bra. I also have them on my scalp. I've never had them on my scalp before. Simon is suffering just as badly. There is nothing that I know of that you can do about them. The anti-histamine cream Onctose helps a bit, but briefly. I only hope that Yvonne did not catch any as that would be miserable for her. She wasn't crawling around on the ground doing arty shots though so she might have escaped.
*************************************
A la cuisine hier: Two rustic apple tarts, one for now, one for the freezer. I've never got the hang of traditional double crust apple pie, but this is an excellent easy substitute.

I've had chiggers, or red bugs as we also call them. All you can do, I think, is take a lot of very hot baths in very soapy water.

Yes I think that might have been our mistake. Normally when I've had a session working in the orchard I come home and have a shower. I still get 'bitten' but it's not so bad. Because this was just a photo session we didn't arrive home all hot and sweaty, so didn't think to shower.

Ugh, chiggers. Just reading about them makes me want to scratch. We have a
real problem with them here in Texas, especially in the


We have a real problem with chiggers here in Texas. Just reading about
your bites makes me want to scratch. As you may know, it's the just-hatched
mites which hang-out on the blades of grass waiting for their victim. When you
work in the orchard, wear longish socks into which you can tuck your pant legs.
The mites gain access to your body by grabbing onto your clothing, When you
get home strip down outside or in front of the washing machine and toss your
pants and socks in some hot soapy water.

BTW, Benadryl makes the best anti-itch potion we have found. Needs frequent
application though. If available in Europe, the liquid form in a small bottle is
recommended.

Thanks for the advice. I more or less did that today after mowing in the orchard -- stripped off immediately I got home, had a hot soapy bath as per Ken's advice and put the clothes in the washing machine.

I only know Benadryl as a cough medicine. I'll see if the pharmacist has something for itches made by them too.

I only got harvest mite bites once and they were unbelievably itchy, so I feel for you.
It was also in early september so I presume that's the usual time to be aware of them.

Yes, August and early September is the time they are around.