Maria de' Medici was born in Florence in 1575, the daughter of the Duke of Tuscany and his Habsburg wife. Although she was their sixth child of seven, only she and one much older sister survived into adulthood. She was not particularly closely related to Catherine de' Medici, but from a branch of the family not descended from Lorenzo the Magnificent. Portraits of her show that luckily for her she didn't inherit the Habsburg jaw and she seems to have been a pretty young woman. Unfortunately she also seems to have grown up into a rather stupid and greedy woman.

When she was 25 years old her father received an offer for her hand from the French King Henri IV. This was an entirely pragmatic move on Henri's part. He was heavily in debt to the Medici family but wanted to fund another war. Maria's dowry would solve that problem. In addition he had divorced his first wife Marguerite de Valois and had no legitimate children. He needed an heir, and 11 months after their wedding Maria produced the goods on this front as well.


Marie de Medici with the Dauphin Louis,
painted by Charles Martin in 1603 and hanging in the Chateau of Blois. 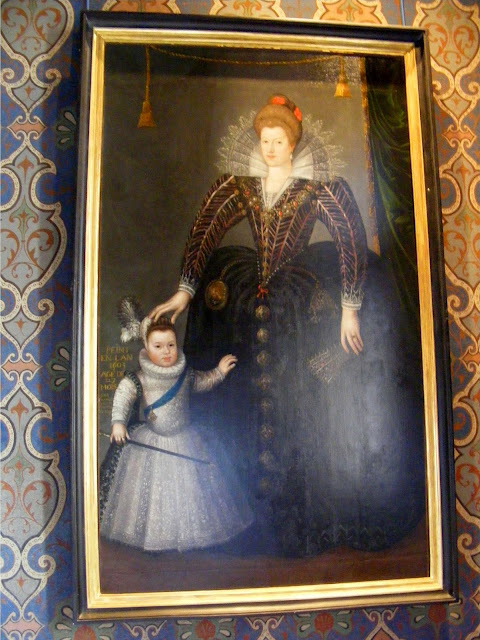 Henri spent his marriage trying to keep the peace between his Queen and his mistresses. He had promised to marry his principal mistress, and Marie's appearance on the scene lead to most unedifying rows. Curiously, Marie seems to have had no quarrel with her predecessor Marguerite, and supported her return to court from exile in the French mountains. Once back in Paris Marguerite was closely involved with the raising of Henri and Marie's growing brood.

Henri was assassinated before his heir Louis was yet 10 years old, which meant that Marie, as she is known in France, became regent. Unfortunately Marie was completely under the malign influence of her maid and her maid's husband. They set about feathering their nest and Marie, as a Catholic and a Habsburg, started reversing all of Henri's foreign policy aimed at keeping Spain at bay. The capable Duc de Sully was dismissed as Foreign Minister. Their oldest daughter was betrothed to the heir to the Spanish throne.

Finally the senior nobles of the court got fed up enough to revolt, and the next year the young king asserted his independence. He exiled his mother to the Chateau of Blois and had her maid and her husband killed. Marie managed to escape from Blois after two years and with her younger son Gaston d'Orléans she tried to take the throne. After her rebellion was defeated, Richelieu (at this stage her protegé) negotiated with the King to let her set up a small court at Angers.

Over time the King began to rely more and more on Richelieu for advice and they both distanced themselves from the Duc d'Orléans and the Queen Mother. Marie intrigued long and hard to engineer Richelieu's fall from grace, but failed and in 1631 went into exile and never came back to France. She tried visiting her youngest daughter, Henrietta Maria, the wife of Charles I of England, but as a Catholic in a Protestant country it wasn't very comfortable. Eventually she ended up in Cologne in Germany, where she died in 1642 in much reduced circumstances, having schemed against Richelieu and Louis XIII until the end.
Posted by Susan at 09:00