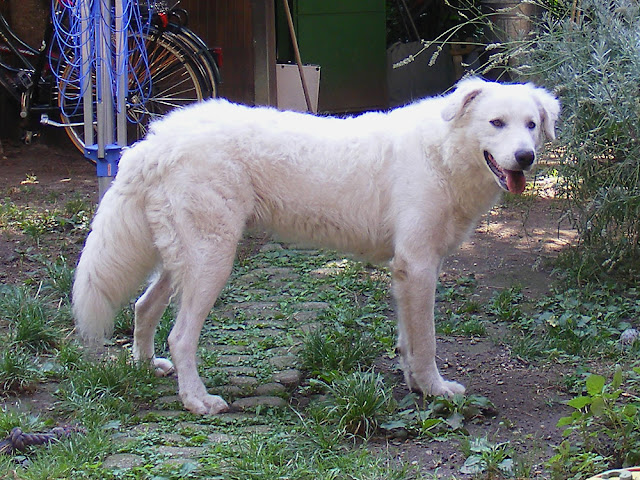 Bruce belongs to Ramon, the son of our Milanese friend Stefania. He isn't yet a year old and was rescued by Ramon as a puppy. He was found locked in an abandoned car in Rome when just a football sized ball of white fluff.

He's probably a Maremma, a breed of dog used for centuries in the mountains of Tuscany to protect sheep from wolves. It seems likely that Louis XV owned a number of these dogs, imported from Abruzzo to hunt wolves in France in the 18th century.

Mostly Bruce appears none the worse for his early bad experience and is a friendly and cheerful character. He doesn't have any really bad habits, but Stefania says he appears to be frightened of men in suits and ties and reacts by aggressively barking at them. 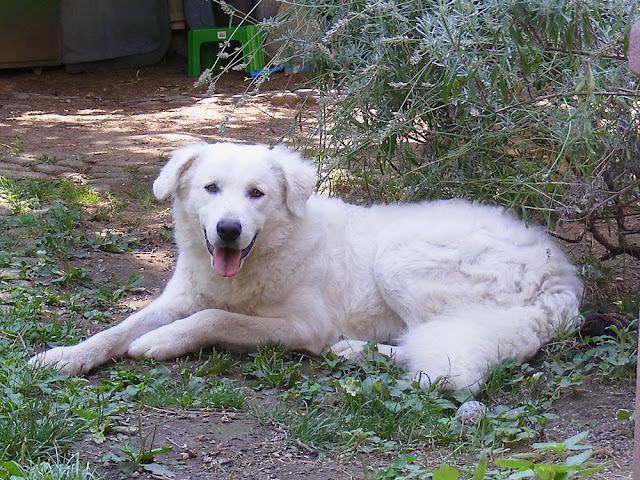 Like most Italian Bruces (we have been told), he is named after Springsteen, not Lee or Willis.

Earlier I had been intrigued to notice that the young male conductor on our train over the Alps was wearing a name badge that said 'Bruce'. He was clearly French, and I double checked the name badge. I wouldn't have been surprised if his name had been Brice, but I've never met a French Bruce before. I didn't like to quiz him about his name though.
Posted by Susan at 09:00

He's a handsome dog.
So glad he has a good home after his near miss as a puppy. To leave a dog in a locked car to die is even worse than dumping it in the great outdoors to fend for itself. At least he got lucky.

he is a beautiful dog & very lucky one too

Too hairy for me to want to live with, but excellent personality for a companion animal.

Nice dog, and he did get lucky in his rescue. He looks a bit like a Great Pyrenees, but perhaps the breeds are cousins.

I think they look similar because they've been bred for the same work.

Of course I think of Bruce as quintessentially Australian as did Monty Python (The Bruce Song). At the moment we are trying to decide between a pair of alpacas or a Maremma to keep the foxes from our lambs. In order to bond properly with the sheep, the dog must be detached from its owners to some degree; not too much interaction or affection from humans. We think it might be easier to detach ourselves from alpacas.

I think of Bruce as a particularly Australian name too, but the reality is it's rather a stereotype. I've met more American Bruce's than Australian. Apparently I was going to be a Bruce if I'd been a boy though.

I've seen Great Pyrenees used here in sheep and goat flocks, but donkeys are also used. I'd be inclined to go with the alpacas myself. I agree that it will be easier to see them as part of the flock and not part of the family.