Some years ago we read that there were Roman ruins near the small village of Thésée on the northern bank of the Cher. After studying the map and even GoogleEarth aerial photos we duly trotted off to visit them, approaching from the south and discovering the excavated foundations of a temple complex on the south bank of the river, by the small bridge with a memorial to a downed American airman. Thrilling we thought, and took lots of photos. We visited a second time and found that more excavations had been done. Super dooper and gosh what a lot of rather indeterminate rubble -- we weren't sure whether what we were looking at was Roman or 19th century.


The main building at Les Mazelles. 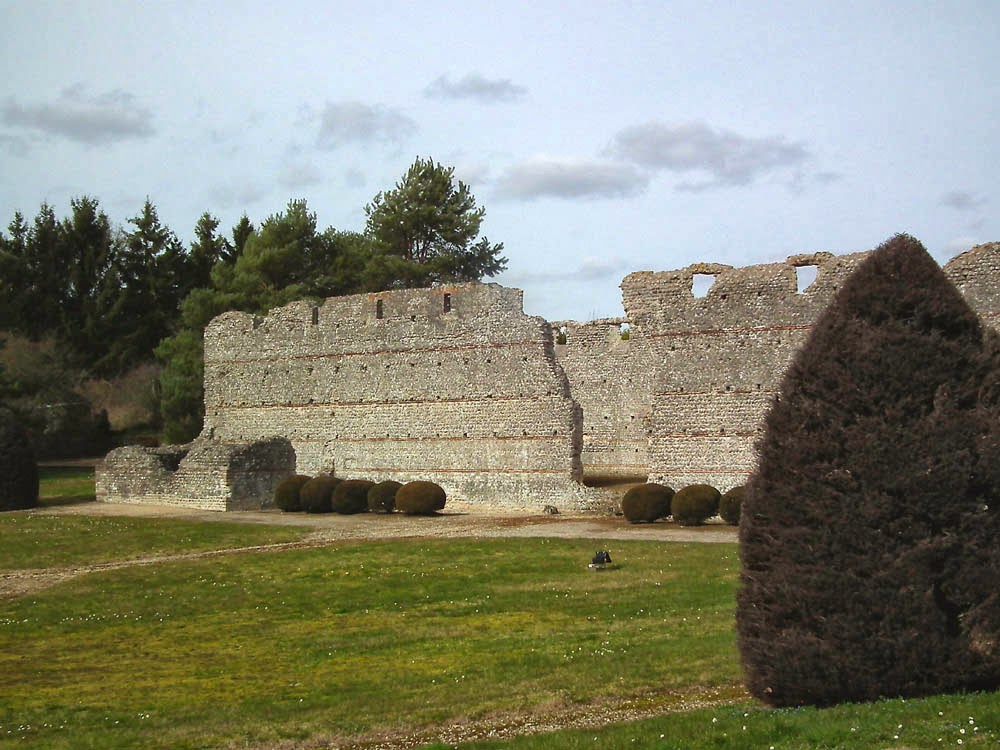 Eventually we mentioned the site to Niall and Antoinette and they in their turn trotted off to visit. When they got back their description of what they had seen didn't match ours at all. What was going on?

One day last year we found out. For once we entered Thésée from the west, and there on your left is a stonking great Roman ruin, with walls metres high, not just foundations requiring the maximum of imagination. Before, we had always entered Thésée from the south and turned right to go through the village, never realising that the ruins we had heard about were plain to see on the edge of the village in the opposite direction. 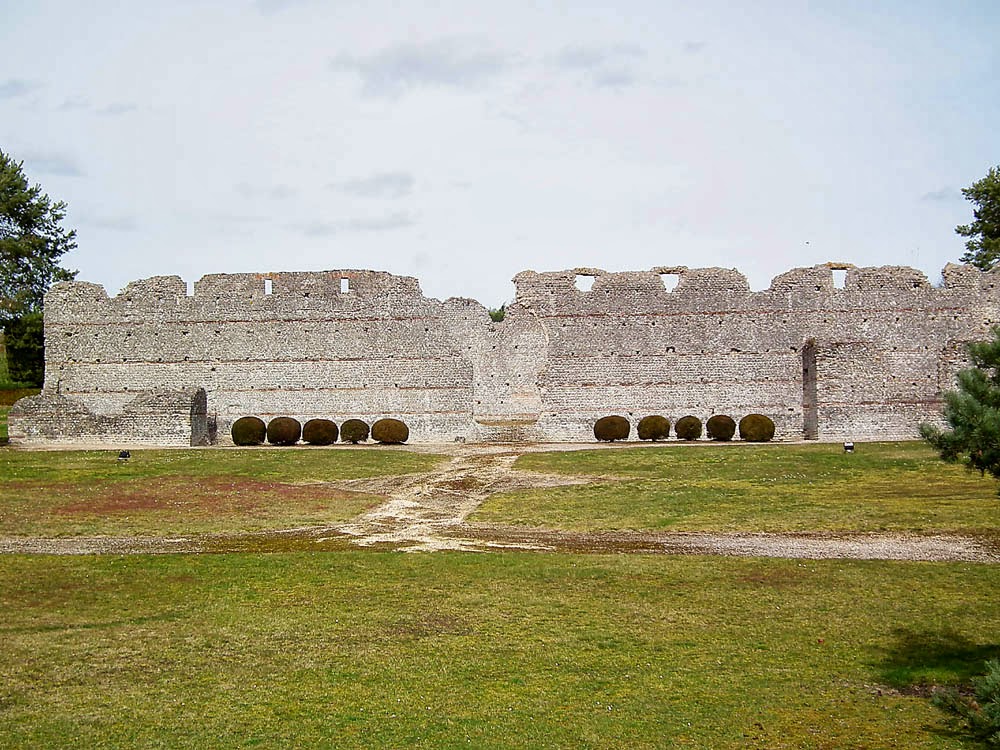 Earlier in March we returned yet again to take photos of this impressive site. It should properly be called the Gallo-Roman Site of les Mazelles. These imposing ruins have long intrigued the locals, specialists, antiquarians, archaeologists and historians alike. Theories (some serious, some crackpot) abound as to the purpose of the buildings and local legends have been created around them.

For the visitor today, the Mazelles ruins are the most visible remains of the ancient Tasciaca. In fact, far more still lies hidden underground, having been excavated and re-buried for protection. The site is situated 100m or so from the right (north) bank of the River Cher, right on the modern D176 as it comes into Thésée. In Roman times, this was the road from Tours to Bourges (and on to Nantes or Lyon ultimately). The proximity to both these highways (road and river) explain the location of Tasciaca.


The interior of the main building.
The sign says 'This listed site must be preserved. Have the kindness: not to climb on the walls; to avoid touching the stones.' 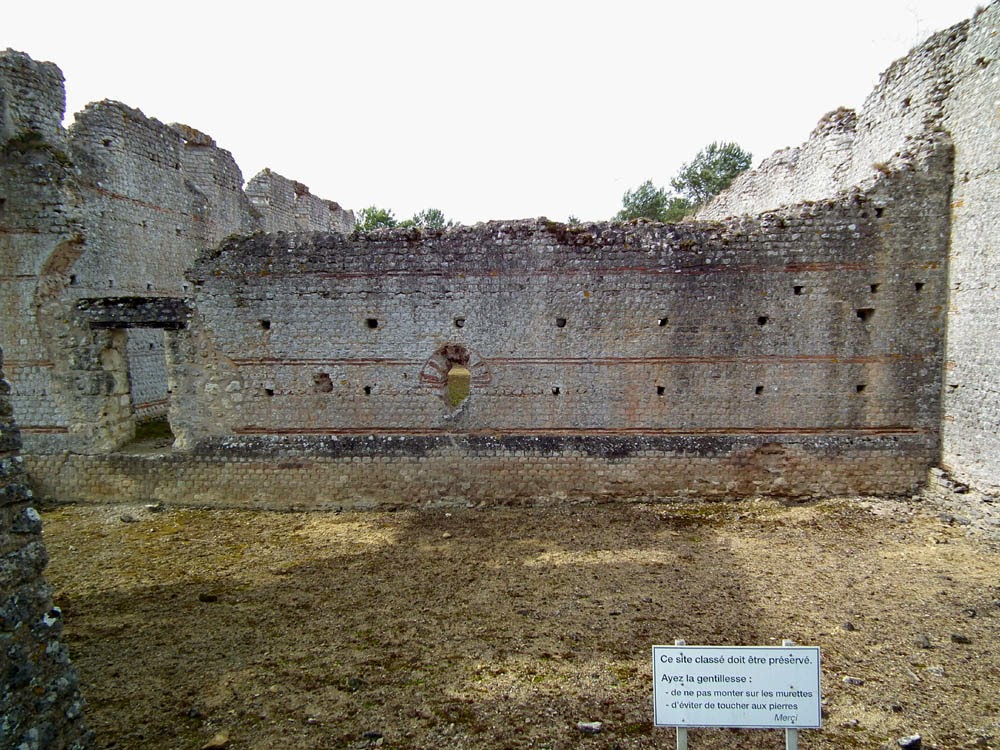 The complex consists of three buildings within a curtain wall forming a quadrangle of 7000m². The main building, to the north, is exceptionally well preserved with walls still 7.4m high and 52m in length. It comprises two rooms, one of which is 40m by 14.5m, flanked by two pavilions which were probably connected by an open sided gallery.

To the south we find two other buildings. The one on the south-west, 12m x 10m, is levelled off on top by three courses of quarry (rubble) stones. The other, to the south-east and measuring 35m x 18m, shows evidence for several rooms, but is in a rather delapidated condition and the original construction was more slapdash than the main building.


Evidence of what looks like a nicely done modern repair, made clearly visible so there is no confusion between museum service repair and original, as is best practice today. 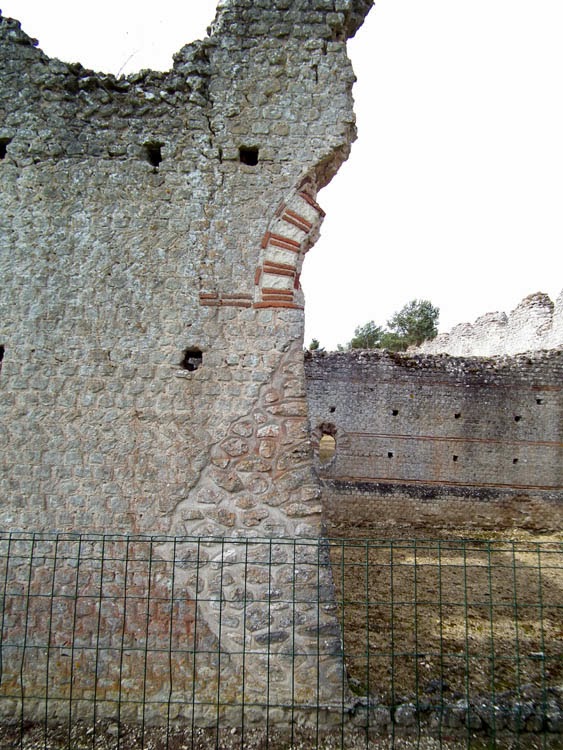 The big main building to the north is the most interesting. Nothing else like it exists in the Gallo-Roman world, but its method of construction, with small visible stones and frequent brick courses is typically Roman. The walls have two faces, interior and exterior, made with small rectangular quarry stones or flat ones laid in a herringbone pattern, bonded by mortar. A mixture of mortar and stones was packed between these two faces. To bond the vertical layers together, two courses of big bricks which bridged the width of the wall were periodically laid.

The holes you can see in the walls are notches to hold wooden scaffolding used while constructing the building.


The cruder building to the south east, with the main building in the background. 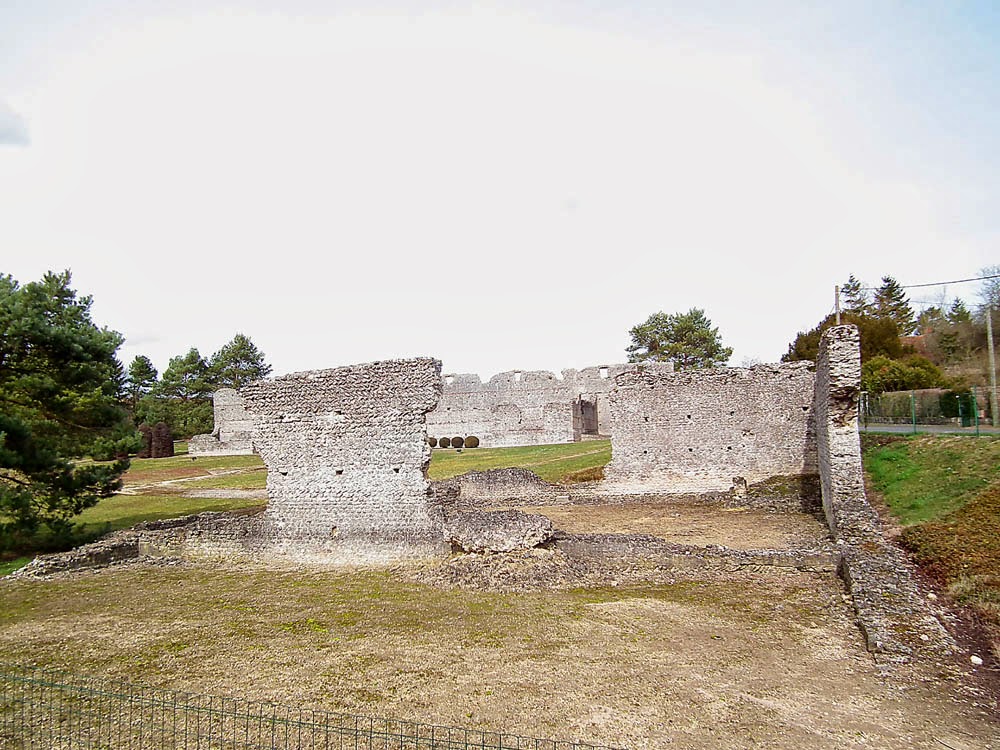 Two thousand years later the walls are still standing, thanks to their method of construction. Although local tuffeau, like the stone used to make the chateau, these stones are of particularly high quality, with a low porosity and high density that has made them very durable. In addition, they are small in size and set in a very hard mortar, so they did not tempt the later local inhabitants to reuse them and treat the site like a quarry.

Les Mazelles was classified as an Historic Monument by Prosper Merimée in 1840. Old photos show the buildings abandoned, covered in ivy, brambles and scrub. In 1950 they were privately owned, with a vine growing in the shelter of the walls. From 1962 to 1965 a team of young archaeologists pulled the ivy from the walls, cleared the area and undertook a series of surveys and test digs. Maurice Druon, a member of the Academie Française, happened to pass the site one day in 1965. Falling in love with the place he purchased the ruins and the surrounding land, which he scoured and remodelled. In 1976 he gave Les Mazelles to the département of Loir et Cher for a symbolic 1 franc and the Conseil Général have landscaped the surroundings to what you see today.


A close up of a wall.
Note the alternating bands of small flat stones laid in a herringbone pattern and small rectangular stones, as well as the notches for scaffolding. 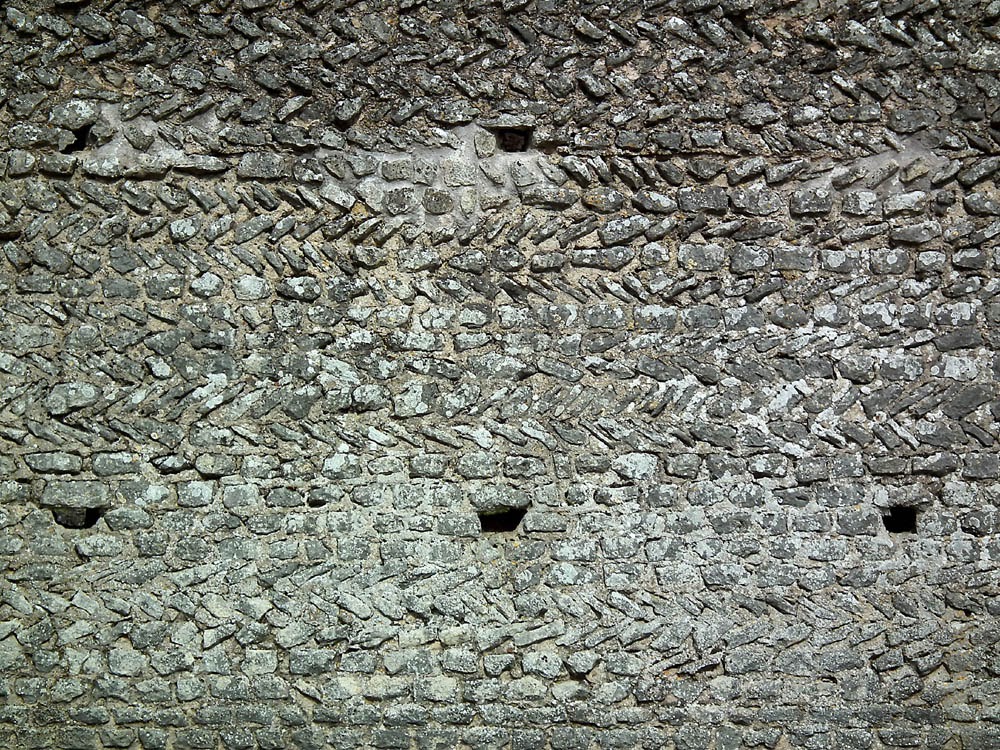 Les Mazelles was probably constructed during first third of the second century, under the rule of the Emperor Hadrian, a period of peace and prosperity in the western part of the Roman empire.  The preliminary digs completed on the site have not allowed archaeologists to say with certainty what the site's role was. It is assumed that the buildings had multiple functions relating to their geographic position and in particular their proximity to the Roman road and the Cher. It is thought they were a sort of staging post, with government offices dealing with administration, taxes and justice, possibly also a market, shops, exchange and a temple. It does not seem to have been a military encampment.

The Friends of Tasciaca have an informative website here (in French), which is where I cribbed all the information above from.
Posted by Susan at 09:00

With walls as good as these, I always wonder whether or not the "buildings" ended up being used for quite a period after the Romans had departed...
at the very least for shelter for animals.

That herringbone work and brick string courses remind me very much of the octangular tower in York, which is Roman too. Nice photos!

@Pauline - we thought the same when we visited it.

Thank you Susan for this interesting and informative post, and for the link.

love this......i remember wondering where the ruins were located when we stayed near Thesee a few yrs ago...thx