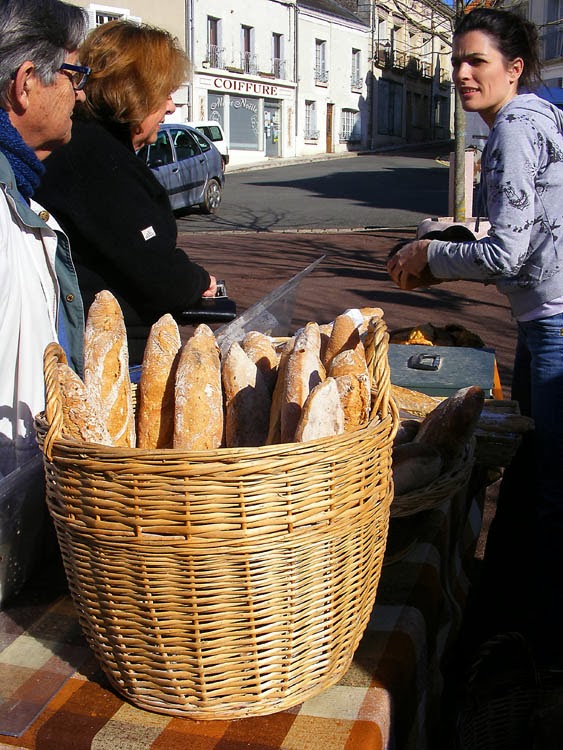 Laurence is one of our local bakers. She discovered her passion for baking bread and worked hard to make her dream of being a professional baker come true. To top it all off, she's gorgeous and a really nice person.


Baguettes de tradition on the left and a large loaf on the right which Laurence saws chunks off as required by the customers. 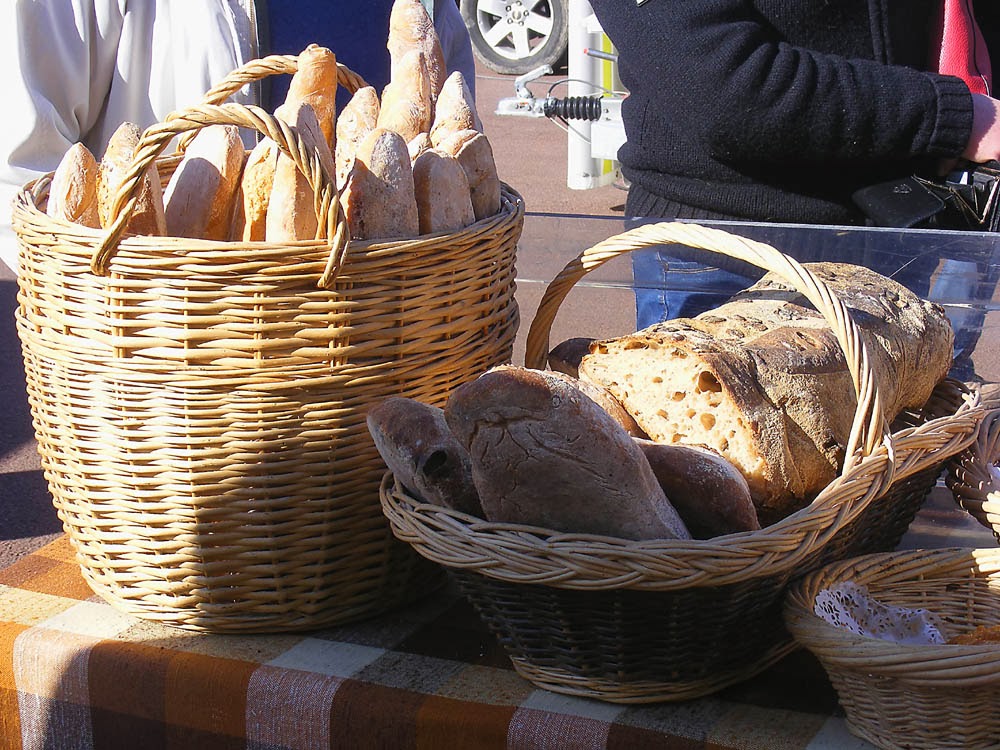 You can buy her bread at the Thursday market in Preuilly and at other local markets and venues. It is made from unbleached flour and sour dough starters. Don't get to the market too early -- she doesn't, usually arriving late in a bit of a panic to set up. There's always a queue for her bread and it is very highly regarded by the locals (including me).
On Thursday afternoons and Sunday mornings I believe she does pizzas, which you can order by phoning 02 47 94 29 28 and pick up in Boussay or at the organic orchard and market garden run by Tony and Sylvain just outside Preuilly. (I was going to check the current pizza arrangements with her yesterday but she was in such a flap when I saw her I didn't like to bother her. She had arrived even later than usual at the market and people pounced on her to buy bread before she had her stall set up. She ended up selling the first few loaves straight out of the back of the van while it was parked in the street.)

UPDATE: Laurence no longer comes to the market. She now has a shop at 21 rue de la Croix, Preuilly sur Claise.

Atmospheric pollution is the big news item at the moment in France. Paris and some other big cities have announced that public transport will be free, to encourage people to ditch their cars and take the bus or the train in an attempt to reduce the floating particulates in the air. Some regions are affected worse than others, with the Loire being quite high up the list. The problem is an inversion layer high above us, where an upper layer of warm air is trapping colder air below it. That, coupled with very little breeze and no rain means that particulates are not dispersed, but just hang in the air we breath. The last few mornings this has been visible as the telltale pink halo around the horizon, and the days have remained oddly hazy despite all the sun. What is making it worse in the Touraine is that it is still cold enough in the mornings and evenings for people to be lighting their wood burning stoves for heat, and many people are making bonfires in the garden, to burn woody waste that they have been unable to set light to during the wet winter.

Email ThisBlogThis!Share to TwitterShare to FacebookShare to Pinterest
Labels: Boussay, Food and Drink, Pictures of Preuilly

Caring for 5 children and doing
all that baking as well as selling
it...no wonder she runs late.

... and she's so slim after five pregnancies!

she doesnt look like she eats much of that bread.....

That's why everyone raves about the French women in the media, especially across the pond :-)

It always amazes me to see how slim Parisians are as opposed to Americans. They walk a lot, and don't take their car to go shopping half a block away. They, as I do, use their 'poussette de marché'. They use their cars to go to distant supermarkets, though.

How is it in Montréal?

And i have trouble getting myself organised to toast bread in the morning. She deserves much praise for following her passion and doing such an excellent job while she's at it.