The composting area of the potager. 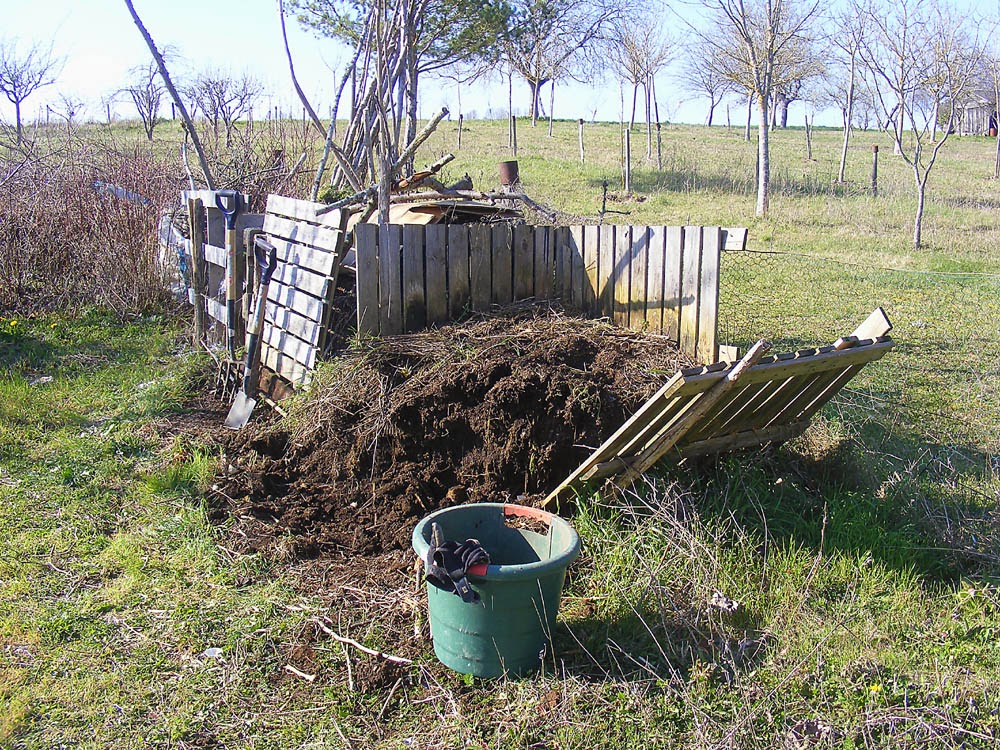 Well...I didn't make compost, a load of fungi and invertebrates made compost. All I did was chuck our kitchen waste in a pile and leave it for several years. I didn't turn it, add accelerators or anything. Just left it sitting in the bin. Nevertheless, I was thrilled when I dug into our oldest compost bin, started soon after we moved here, and it was dark and crumbly and looked just like soil. It's one of nature's magic tricks. 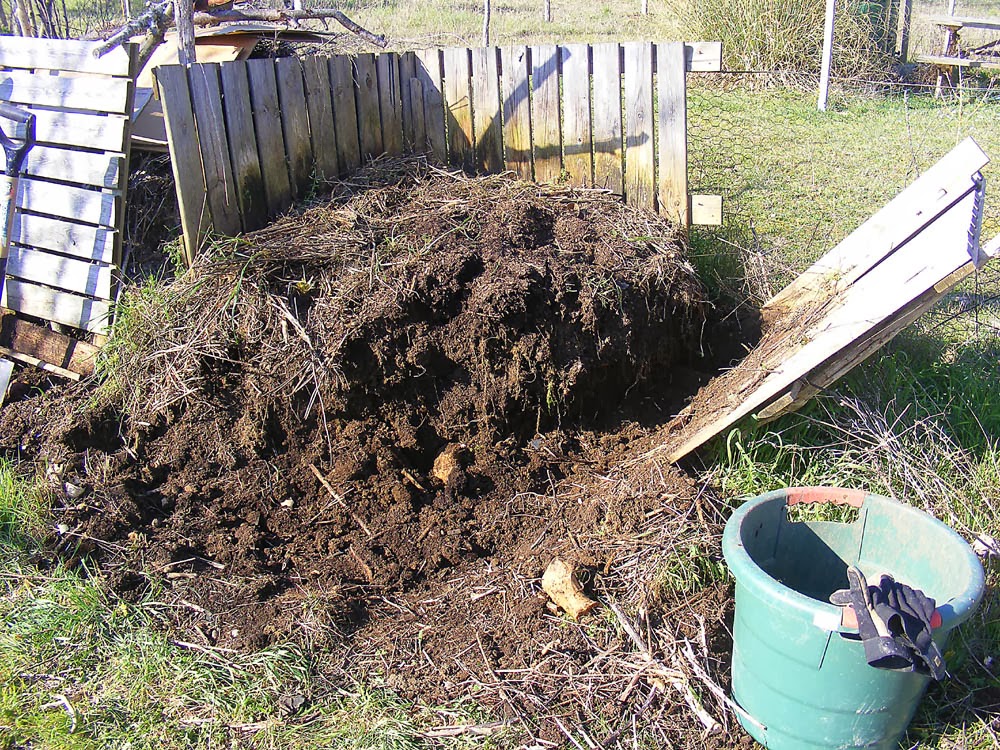 In 2012 I asked Alex to make me two more compost bins, using his simple but ingenious system of recycled pallets. They work extremely well and now I am organised for a three year compost cycle. (See here for what they looked like just after completion.) No more garden centre fertilizer and potting mix for me. I can make my own.


The 2013  compost bin, now under a heavy cardboard cover to try to minimise surface weed growth as it matures. 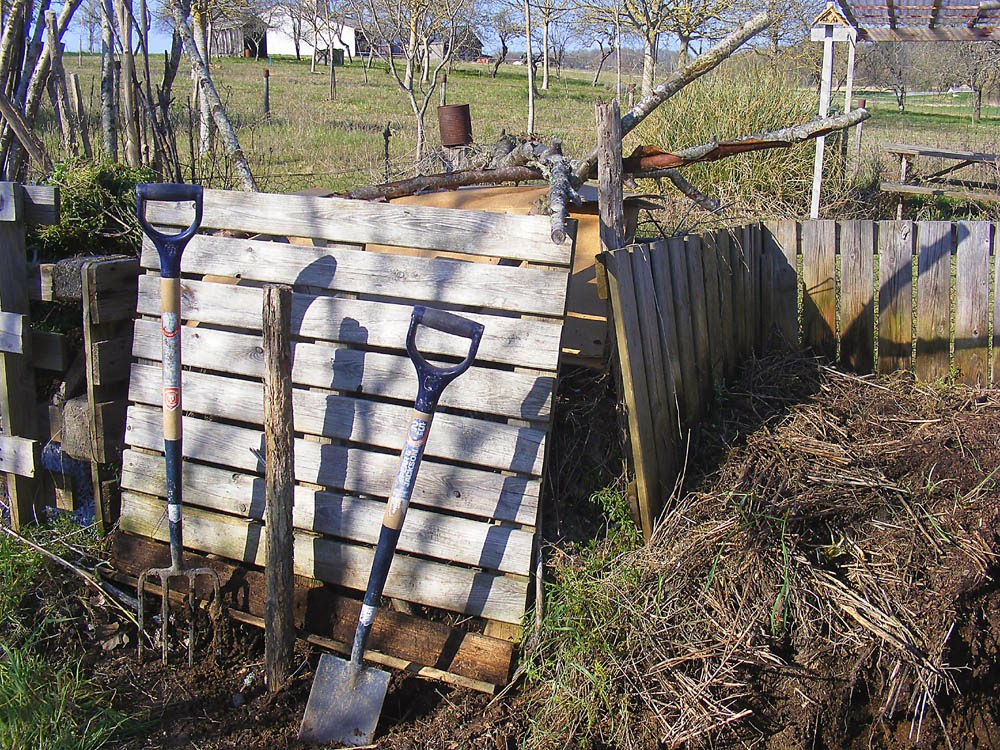 It's good invertebrate habitat too. I've encountered some interesting larvae lurking around in the compost, such as juvenile glow worms and lace wings.


The 2014 compost bin, with shredded paper on the left and grass clippings on the right. The black bin on the far left contains ash from our wood stove. 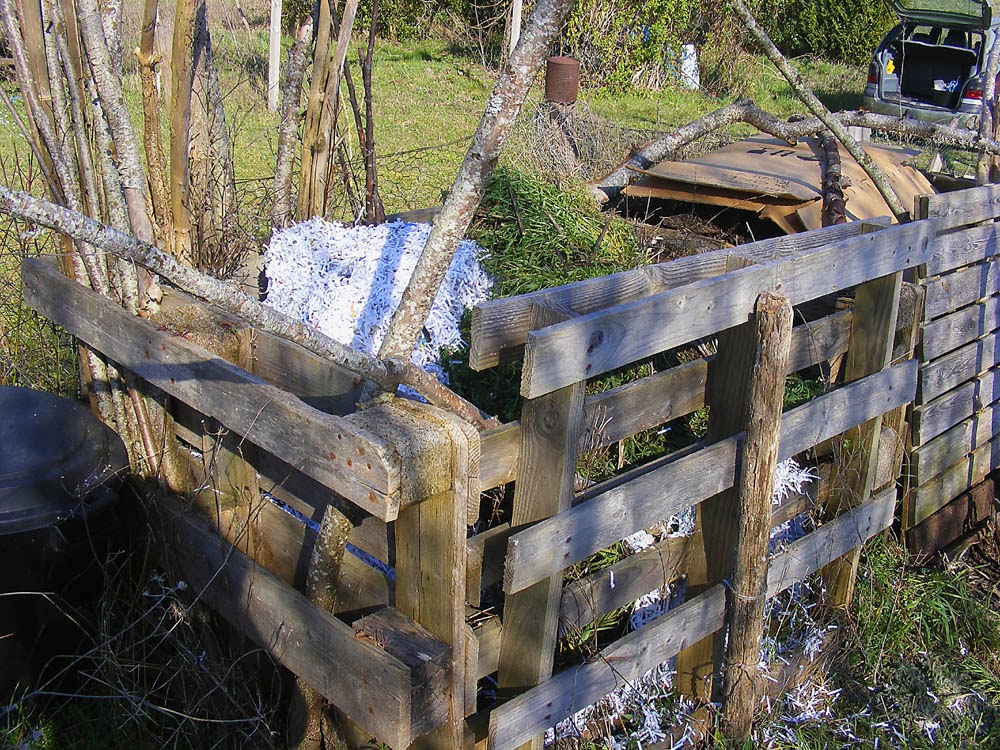 Compost spread on the newly dug potato bed, waiting to be incorporated into the soil. Look at the difference in colour between the dark brown compost and the pale grey natural earth in the bed to the right. 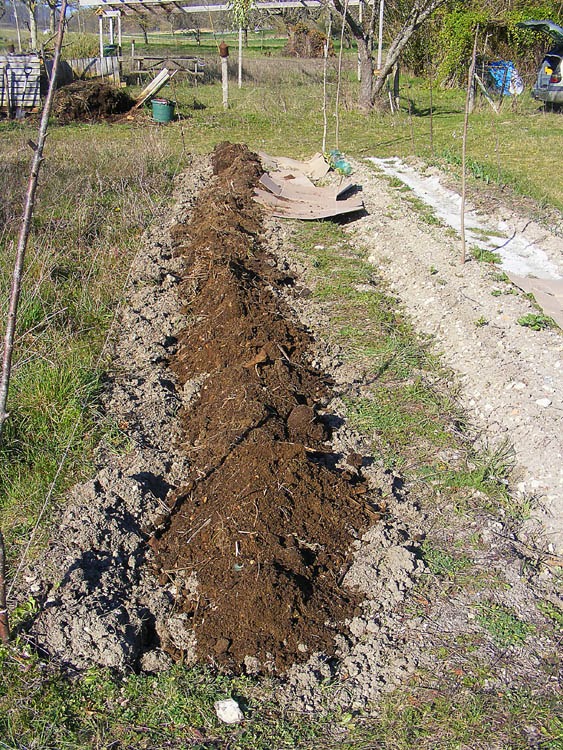 As somebody said, Susan, "compost happens."

That is very good looking compost...
now you have three bins, you can speed up the process of compostin'...
by using a windrow method.
Bin on left is the starter...
to the left of that is the dump area.
you have now emptied bin three...
re-erect and then the bit that is good for Simon...
move the totally unchanged stuff from bin one onto the dump area...
any poorly changed stuff from bin two goes there too.
Now, move all the half composted stuff from bin two to bin one...
all the well-on-its-way stuff to bin three...
move all the stuff that's left in bin one to bin two...
all the stuff on the dump area now goes into bin one....
[confused yet?]...
leave three to six months and repeat...
repeat...
but this time, bottom half of what is in bin two goes in bin three...
and bottom half or so of bin one goes in bin two.
Do every three months and you will have good stuff to use all the year round.
And you really WILL notice the difference in your soil structure and its water retention...
But if you are going to add all that lot to your spud bed...
you will just have to put up with scabby potatoes...
they don't like too much compost.
Use a quarter to half of that in the soil and after you've earthed up, you can mulch with the rest...
that will retain moisture...
solubles will be used by the spuds...
and the remaining humus will condition the soil for your root crops the next year.

That is why everything movable comes off our pumpkin bed before turning it into the spud bed.
What the wurrumz have incorporated is enough, along with what I can't really get off the top.

But put some of that where you are going to grow your courgettes, they'll lurve it!!