The King of Bling 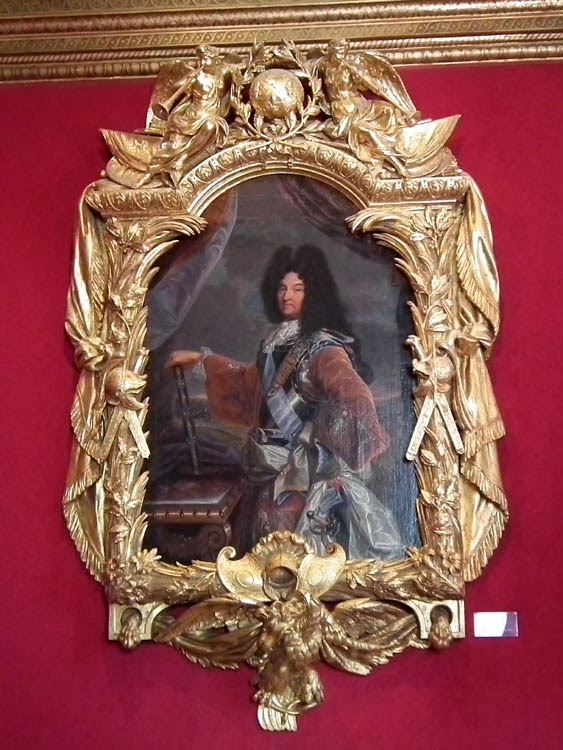 It doesn't take much knowledge of history to guess correctly that this is a portrait of Louis XIV. The more is more frame gives it away even if you don't recognise the man. It hangs in one of the salons at the chateau of Chenonceau and was originally a gift from Louis to his uncle Césare de Vendôme, once owner of the chateau. Like the rest of the objects at Chenonceau, it hasn't always been here, but has been acquired by the current owners because of its significance to the chateau.

The portrait is by Hyacinthe Rigaud, Louis' court portraitist and painted about 1700. Like any of Rigaud's portraits it is a magical mixture of completely accurate character representation and ideal ego boosting likeness. I don't know how he did it. Couple that with his superb technique with luxury textiles, and any portrait by Rigaud is worth looking at, drooling at the silks and velvets and musing about what the artist thought of the sitter. However, I'd be willing to bet most people hardly give the portrait itself a second glance. It is totally overshadowed by the astonishing carved gilt frame, which was created for the painting.


Detail of the frame. 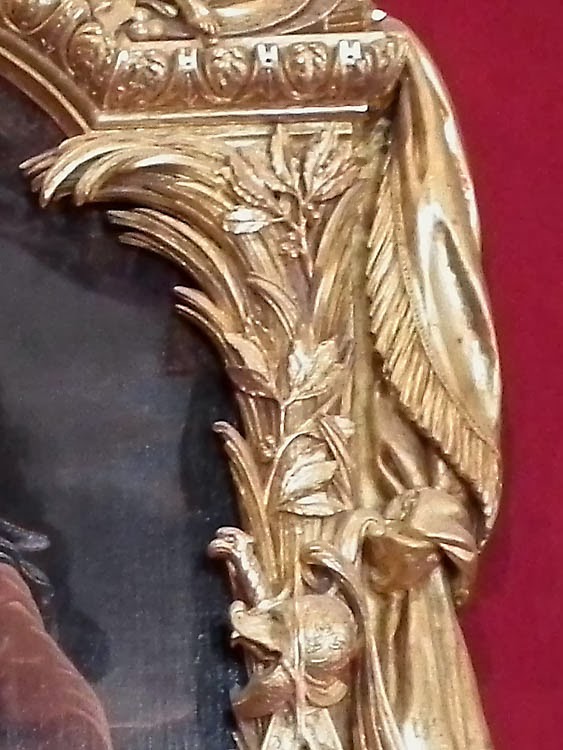 The frame is huge and weighs an enormous amount. It was made by the highly regarded sculptor Pierre Lepautre. The fact that the owner has to somehow get it hung on the wall is not taken into consideration at all. (I bet the chateau has a special disaster plan just for this object too, just in case it has to be got down in a hurry in a fire or flood.) The frame is apparently made of four large slabs of wood which have been carved into palm fronds and draperies held back with Roman helmets, supported by an eagle with outstretched wings, surmounted by a globe ornamented with fleurs de lys between two winged Victories seated on the drapery. Normally frames such as this are made in a modular fashion, with each of the decorative elements carved or moulded from composite resin separately and attached to the basic frame with tacks and glue before the whole thing is covered in gesso. Very fine detail can be added to the gesso layer, then the frame is given a base colour (usually red) to enrich the gold leaf which is the final layer. I gather that this frame is carved straight from the four large pieces of wood, a much more technically difficult feat.

For me the over the top frame is rather curious, given that it draws the viewer's attention away from the portrait of the man who commissioned it. It seems odd that such a great ego did not recognise the impact the frame would have at the expense of the portrait.

I have tied some privet branches to the pergola to create some shade and protection for the redstart/robin nest box. I was up a ladder in the middle of doing this when our lady orchard neighbours arrived. 'Qu'est-ce que tu fait?' they asked, in tones of slight alarm. I explained and they were happy. They had noticed the nichoirs and liked the idea.

The almond and the nectarines are blossoming.

Was the frame added around the time the portrait was painted, or is it from a later time? I'm sure the artist would have agreed with you (and me) about the unsuitability of that particular frame for the portrait.

Gaynor: the frame is the original, put on when the painting was finished.

Thanks, Susan. On a second read of the post you clearly state that the frame was created for the painting. The problems of skim reading...

Very interesting post, Susan. I remember that portrait perfectly - well, the frame anyway! I'm looking forward to more posts like this one.