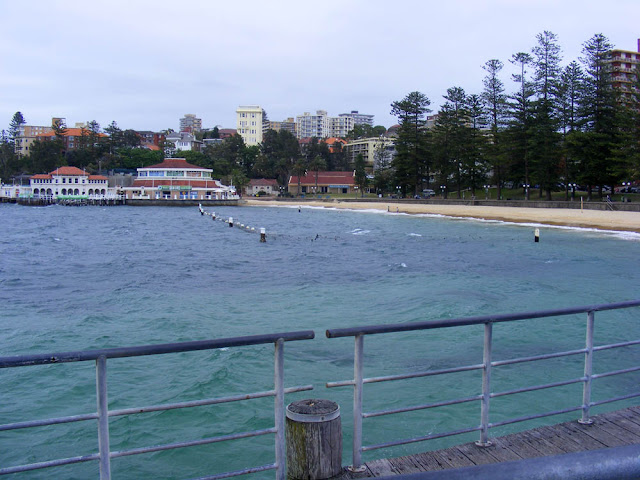 About 50 beaches in New South Wales are shark netted. Other states do not try to protect beaches against sharks, or use a different system. This one at Manly Cove is unusual in that it is quite visible. Normally, the nets are set several hundred metres offshore and only come to within 4m of the surface of the water, to allow boats to pass over them unhindered. They appear to be very successful, in that there has only ever been a single fatal attack on a netted beach. However, any shark caught up in them drowns, and there is a significant bycatch, often of endangered species such as sea turtles, dolphins and even whales. The nets are removed over winter, partly to ensure that migrating whales are not accidentally caught.

************************************************
We've Been to Paris!!: We have just got back from a few days in Paris. We rented a studio apartment in Bastille (11eme arrondissement) and spent the time doing touristy things with our Australian friend Liselle. Highlights were a guided tour of the Gobelins tapestry workshops and shopping in Bastille market. We also went to the Petit Palais, the Rodin Museum, the Jacquemart-André for the de Watteau à Fragonard, les fêtes galantes exhibition, and waved at the Chinese president on Pont Alexandre as well as just general mooching about looking at interesting buildings and eating at favourite restaurants (Chez Marianne in the Marais, Café Beauvau in rue Miromesnil).
Posted by Susan at 09:00

Mooching about is the best kind
of tourism, I think. Sounds as
though you had a great time.

My goodness, you were busy! Did you rent through airbnb? The Banque de France has a Fragonard.
Interesting information on the shark nets.

I've come back exhausted, I think from pounding the pavements. We did rent through airbnb and the apartment was terrific -- teeny weeny, but unbelievably quiet, and fantastic location.