A female. Her antennae are a bit shorter and she has fine hooked feet. 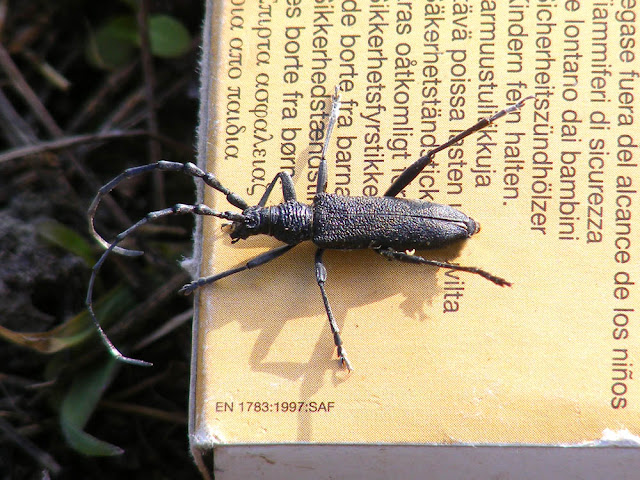 Lesser Capricorn Beetle Cerambyx scopoli is a medium sized longhorn beetle that seems to emerge very early in the year. Last year I recorded a female in January and a male in March. The text books all say they emerge in May and June, and I expect most of them do, but I notice on the French online insect forum discussions that I am not the only one who has seen them earlier, and André Lequet says they emerge in April (see his page on the species for pictures of the complete life cycle).


A male. He has longer antennae and wide flat feet with hairy pads. 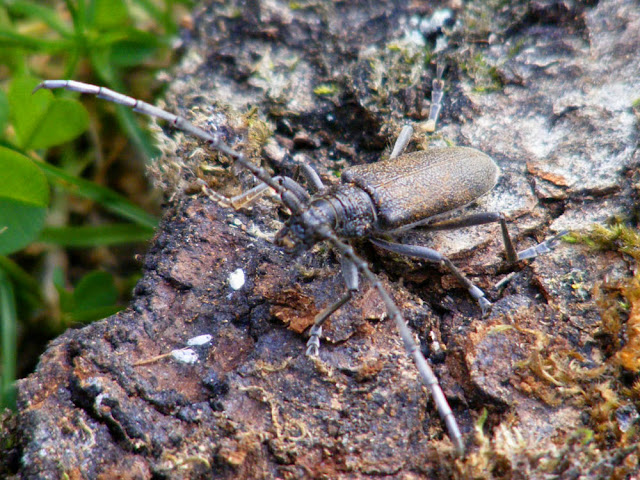 They are not difficult to recognise -- look for the following:

You can see in this photo of the male the silvery down and the way the antennae changes from bulbous to flat. 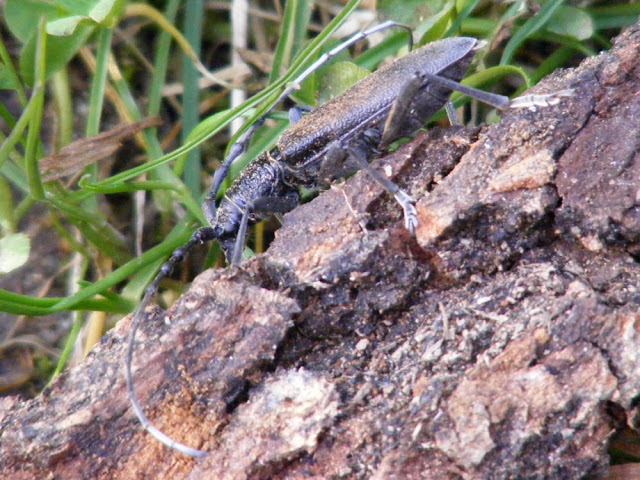 The female beetle lays her eggs under or in cracks in the bark of the host trees, which could be Oak, Beech, Elm, Pear, Hornbeam, Birch, Poplar, Willow, Lime, Hazel, Apple, Cherry, Plum or Chestnut. When the larvae hatch they feed briefly just under the bark, but soon burrow their way into the sapwood and then into the heartwood. The beetle chooses mature trees, ideally those that are somewhat isolated, with branches that get a lot of sun. The larvae will eventually pupate in the heartwood and the complete life cycle takes two to three years.


A couple of times while I was photographing him, he fell off his log. I offered him a stick to get back on, which he took, but he made a squeaky buzzing noise at me, indicating he was a bit frightened and responding by being aggressive. He didn't attempt to bite me though. They move very slowly, but are immensely strong. 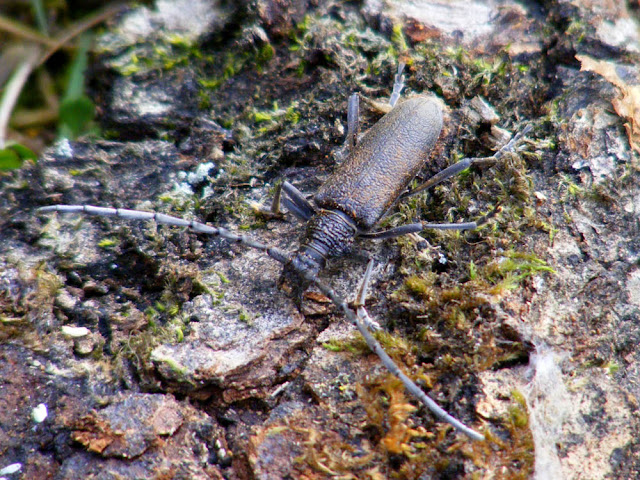 Susan, a timely post....
Pauline was pruning the verger and cut through a larva of a beetle "just under the bark" at the joint on our James Grieve apple...
it had hollowed out quite a space...
primrose yellow [inside and out!] with black spots down the side and a black head with very large mouthparts.

I was intending to photograph the head end....
but lost the damned thing when I got back to the hangar!!
But it looked just like the "typical" longhorn beetle larva illustrated on page 277 of Chinery.
Needless to say, the cut and hollow were well "goujonned"....
to coin a bit of Franglais!!

The shakshuka looks amazing (though nothing wrong with a good Tom Yum either). Is David Leibovitz the go to for recipe inspiration? I'm seriously impressed by the sheer range of inventive ideas coming out of the kitchen!

Liselle: I like DL and read him regularly, but he is not quite at go to status I don't think -- at least not on his own, but probably combined with Clotilde Dusoulier of Chocolate and Zucchini and Susan Voisin of Fat Free Vegan Kitchen, plus my Hugh Fearnley-Whittingstall books.

Tim: the female emerged from an apple tree in our orchard as far as I can tell, the male from oak that came as firewood.