So Why is it Called Toothwort?

Purple Toothwort Lathraea clandestina is a quite rare parasitic plant. There are several good patches of it that occur in the Aigronne Valley, parasitising the roots of the many poplar trees along the river. They flower in late March and early April.


Photographed at the bridge over the Aigronne by le Moulin neuf, between le Petit Pressigny and le Grand Pressigny. 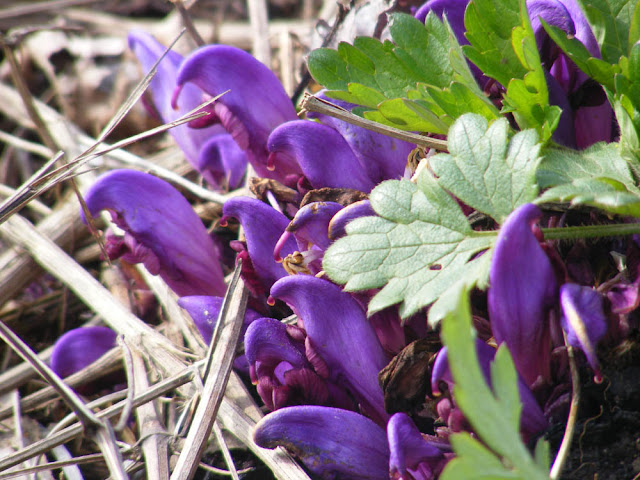 Usually all you notice are the striking Phrygian cap shaped purple corollas, but in places where the river has washed away some of the surface soil, you get a glimpse of why it might be called toothwort. 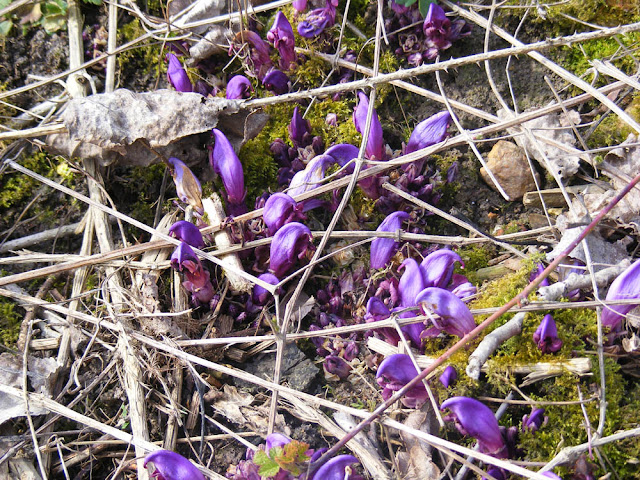 Any plant which has the 'wort' ending to its name is something that was considered medicinal in medieval times. Toothwort will have got its name due to the Doctrine of Signatures, a system of identifying what medicinal use a plant may have by its appearance. Walnuts were used for head injuries because they resemble brains, lungwort was used for chesty respiratory problems because the pattern on the leaves resembled the tissue of the lungs, and so on. These ideas had persisted from ancient times, and in the medieval period were widely (although not universally) accepted.


Toothwort rhizomes exposed by erosion on the banks of the River Aigronne (thanks to Tim for pointing these out to me). 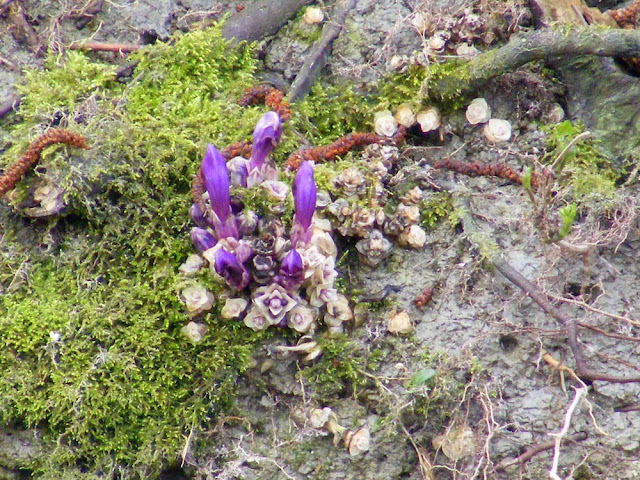 The plant has no chlorophyll and therefore no leaves or green parts, being instead entirely reliant for nutrients on its parasitic attachment to the roots of nearby trees. The resulting white scaly rhizomes have a definite toothy resemblance, and so they were inevitably included in potions and remedies for toothache.

The steak was in response to reading Elise Bauer's recipe on Simply Recipes for the hilariously named Chicken Fried Steak, which came across as the most stereotypically old style American artery clogging fest. However, I was interested to see if her instructions to press the coating into the steak actually made a difference. Simon commented to me that he never had any luck with this sort of dish, as either the coating didn't stick or the oil was the wrong temperature, resulting in either black crumbs or disgusting oil soaked claggy coating. I opted for dipping the steak in egg/milk wash, then seasoned flour, back in the eggy wash and then into breadcrumbs rather than follow Elise's instructions exactly, but I did take her point about firmly attaching the coating. It's messy, but appears to be worth it, as the steak came out cooked, reasonably tender and with an even crispy golden coating. I used bavette d'aloyau, one of the tasty French cuts along the grain, but any of the escalope cuts of pork, veal, turkey or chicken that are so easy to get here would work as well, lightly flattened with the meat mallet as she suggests. I didn't fancy Elise's milk gravy, so didn't make that. I had ketchup and Simon had tomato relish, but actually I think sweet chilli sauce might have been a better choice.

The cake was not the classic pineapple version of my school cooking classes but Jean's Pear and Ginger Upside Down Cake on Baking in Franglais. I veered away from her recipe slightly, by making a 20cm² and a 15cm² cake, and not sandwiching with cream. I'm not keen on cream in cakes, especially as it means you have to refrigerate the leftovers. Refrigeration may keep the cream from going sour, but it makes the cake go stale. Consequently, I mixed some finely chopped preserved stem ginger, a bit of the syrup from the ginger, the merest dash of Poire Williams, a heaped spoonful of icing sugar and a box of cream cheese, which I served on the side with slabs of cake.
Posted by Susan at 09:00

I never was really aware of the anthropomorphism occurring in the naming of some plants. In French, the best known example is 'pissenlit' [pee in bed] which is probably a very strong diuretic? Not knowing a lion, personally, I have no way to check in its mouth if the English name of that plant, dandelion [dent de lion], is true.

We had this in the garden of the last house in France, but it was along the hedgerows which were blackthorn interspersed with oaks as well as along the river banks.

chm...
it is of the lettuce/chicory persuasion...
and is a very good diuretic!!
Fortunately, when converted to wine...
it looses the diuretic property...
but still gets you pee'd!!

One of our fellow allotmenteers in Leeds bought some genuine French "pissenlit" seed while on holiday...
none germinated!
Too much competition from the local dandy lions, probably!!

Ta for the mench Susan...
nice pix.
Interesting article...
but thye ones you clicked here are no where near any poplar...
they are between a old hazel and an alder.
And where the Mill Nine ones are, there was a rather nice hawthorn and hazel hedge.
Until some "vandal" decided to "tidy it" about six or seven years back.

lejardindelucie....
that is an interesting one....
I've not seen it before, and from the blog...
we should be looking now!!
I have now bookmarked the blog, merci!
Susan, if you see it, please let me know where...

Tim: I can't find anything that is more specific about L. clandestina's hosts than 'trees in damp shady places'. L. squamaria favours 'hazel, poplar, elm and other trees'. I've never seen L. squamaria, although I knew it was possible here. I'll check the Paris Basin records for which communes it's present in.

Lucie: thanks very much for the for the link. I see he does an insect one too. I'll make sure to check them out regularly.

The L. clandestina you saw in Scotland would not have been native. It was imported as a garden plant by wealthy landowners with a penchant for botany eg Ellen Wilmott, whose garden was close to where we lived in the UK.

Tim: the only recent records in 37 are from Tours itself (don't know where exactly). There are old records from Cinq Mars, Joué and Saint Avertin -- that's all, so it is clearly quite rare.

Pinet lists 6 sites in the Brenne, all in the Creuse Valley, but he says it probably occurs in other places unrecorded. His sites are at Ciron (in 2 places), Oulches, Rivarennes (in 2 places) and Saint Gaultier. He says it prefers Oak/Hornbeam woods with a north facing aspect or in the bottom of a small valley.

I'm glad the cake was a success Susan!
I'm not keen on cream in cakes myself, unless I can be sure it's going to be eaten on the same day. Although a slice of refrigerated leftover cake the next day is better than one at all from my perspective !!!

What an interesting plant! I've never seen anything like it around here. So glad you tried the "chicken fried" steak. I just recently learned the flour press technique, so I'm happy that it worked for you!

Elise: Thanks for stopping by! I'm very pleased to have learnt this tip for successful crumbing. It's nice to do something crispy fried every now and again.