Translated from the official heritage listing:

Etableau Castle is built on a steep site with defensive ditches, overlooking the valley of the Aigronne [and the Claise] and the village of Etableau. Over the course of the first construction phase, during the last quarter of the 12th century, the keep and the south, east and west sides of the trapezoidal curtain wall enclosure were erected. The square keep is truncated as a result of land subsidence at an unspecified date (18th century?). The enclosure comprises a gate tower once equipped with a portcullis and a corridor or gallery enclosed in the 2 metre thickness of the wall. This corridor overlooked a wall walk (now destroyed), and was accessible from the bailey by a spiral staircase also built into the wall (destroyed ). The north-east curtain wall was rebuilt in the first half of the 13th century, flanked by three large round towers (there are two remaining, now much reduced) and equipped with arrowslits. A fourth tower was built on the south-east corner of the main enclosure. The west tower was rebuilt in the second half of the 13th century perhaps by Maurice de Craon, the first known seigneur, living between 1226 and 1250. In the 16th century, there was a new construction phase (now in ruins) in the bailey, quarries and wells were dug and the fortress was then used in the defense against the Protestants, who stormed the castle in 1569. In 1728, the castle was demolished. St. Catherine's chapel (now demolished ) mentioned in 1787, served as a public chapel in the absence of parish church in the village, the farm (18th century?) has recently been restored, the castle is in ruins. 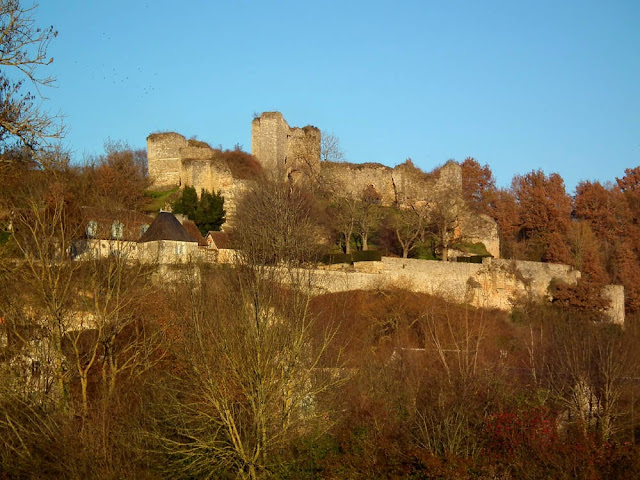 The keep and main enclosure walls are of medium sized cut stone filled with rubble and those of the north wall and part of the east and west sides are similar, capped by field stones. There are semicircular barrel vaults at the gallery level and ribbed vaults in the lower room of the towers. There are internal masonry spiral staircases. 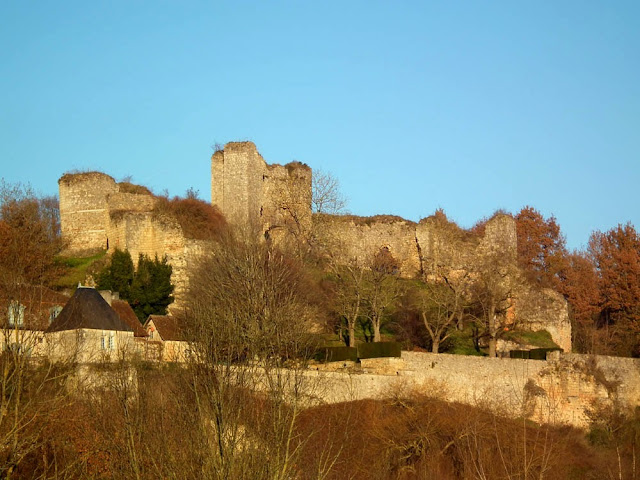 It is privately owned (by the pharmacist from le Grand Pressigny I believe), not open to the public, and was listed as a national monument in 1952.

You are correct...
our outgoing Maire and pharmacist M. Johannes is the owner...
and the terrace in front of the house is a great place to have an apero!!

There is a walk from a little further up the road, toward G.P., that takes you along behind the chateau...
there you can see clearly how it linked with the main chateau and the one at Riveau...
the trio guarding the valleys very well.

I've a view of the chateau at Etableau from the back here:
http://www.flickr.com/photos/le-moulin-de-la-forge/3427431416

Le Riveau is all that is left of the middle chateau...
there were, in fact four...
but some of the terraces are currently visible as you approach the "mound" from Petit Pressigny on the D103...
they were revealed as they clear-felled that bit for firewood...
once it coppices back up they will become invisble again!

There is a map, showing the four chateaux...
and their relationship with each other and the valleys....
in the museum up at the castle.