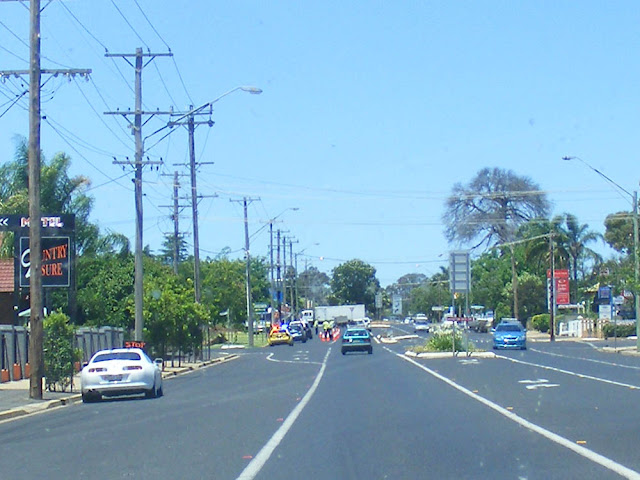 When we were driving back to Canberra after visiting my parents in Queensland in December 2012 we were pulled over by the police just after lunch going through the town of Dubbo, in central western New South Wales. The police had set up a random breath testing station, something that, to their credit, the Australian police will do without fear or favour, setting up on main roads at peak hour and pulling every single car over if they think that's what it takes. Random breath testing has really made an impact on fatalities caused by drink driving. There are no cries of civil liberties being infringed nor claims that the country will grind to a halt if the police actually enforce the law (Britain I'm pointing at you here...) The Australian public changed their attitude to drinking and driving very quickly indeed, and random breath testing is widely supported.

Simon was driving, and although we'd just had lunch (in a cacophonic cafe that hadn't had quite enough money or taste expended on renovations) we had not had a drink. He happily breathed on the sensor, then handed over his driver's licence -- warning the policeman that it was not Australian. The policeman was slightly bemused to be handed a piece of pink card by a man with an Australianish accent, driving a typical Australian's car. His first comment was 'There's no photo!' Simon pointed out that it folded, and the photo was inside. So that was OK, just -- the policemen clearly wasn't very impressed by the French licence. Still, since these licences are valid for life, we are not in any hurry to swap them for the new EU compliant credit card style licences which are only valid for 10 years. We have until 2027 to make the change.

Random breath testing is common in France too, and just as successful. I was pulled over once in front of the Hotel de Ville in Preuilly. The gendarme was completely unphased that the boot of the car was full of empty wine bottles that I was taking to the dechetterie (recycling depot). He was more interested in practicing his English on me. I had had a drink at lunchtime, but fortunately enough time had elapsed that I registered 0 on the machine. At one stage here you had to carry a disposable single use ethylotest in the car with you but the rule was so stupid it was never fully introduced.

I noticed there was a good deal of cleaning action going on in the old Claise restaurant as was (more recently the El Dorado). I would guess this means that someone has bought it.

If you want to vote in the local elections (23 March) you must present your carte electorale and a piece of identity when you go to cast your vote. If you don't have your carte electorale you must get an attestation d'inscription to prove you have enrolled. We have not received our carte electorale despite enrolling several months ago. A number of people we have spoken to have not received theirs either. There will be 4 lists in Preuilly, headed by Guy Buret (one of our neighbours), Henri Robert (a retired grazier), Jean Paul Charrier (currently on the council) and Gilles Bertucelli (the current mayor).
******************************************
Orchard News: The grelinette has come out of hibernation and I have dug half a potato bed. Last year I lent the grelinette to Tim, who has very kindly improved the fit of the handles by inserting wedges. The soil is still quite wet, but just diggable. My work has been inspected by the aged orchard neighbour, who has pronounced it good and advised that once I have dug it over once, to leave it for 5 days then go over it with a 3 pronged cultivator.

I've planted a few lettuce seedlings under cloches which may or may not survive.

Simon and I had our hair cut a week or so ago and I have put out the hair in the orchard for the birds to use for nesting material.
Posted by Susan at 09:00

Email ThisBlogThis!Share to TwitterShare to FacebookShare to Pinterest
Labels: Australia, Food and Drink, The Car and Driving

We've put cat hair out for the birds - human hair is reputed to repel deer, as well. As are lion droppings, should you have any (once marketed under the name of Zoo Poo). P.

PG: Ghislaine (our hairdresser neighbour) used human hair to repel rabbits last year and all that happened was the birds used it as nesting material.