Genillé is a village near Loches with a population of about 1600. The church (église) of Saint Eulalie sits at its heart (right opposite the excellent Restaurant Agnes Sorel).

The oldest part of the church is the square bell tower, which was constructed in the 12th century, originally with a stone spire, but now with a 15th century spire. The church was very badly damaged in 1145 during the course of a battle between the lord of Amboise and the Count of Anjou. The nave wasn't consolidated until the 13th century, modified in the 14th century and much of the church was finally rebuilt in 1523 (nave, choir, apse, south chapel and main entrance). In 1660 a chapel was added to the north. The ceiling of the nave is a vault of tongue and groove wooden panelling from the 16th century, with visible beams and king posts. The decorative paint scheme is from the 19th century. 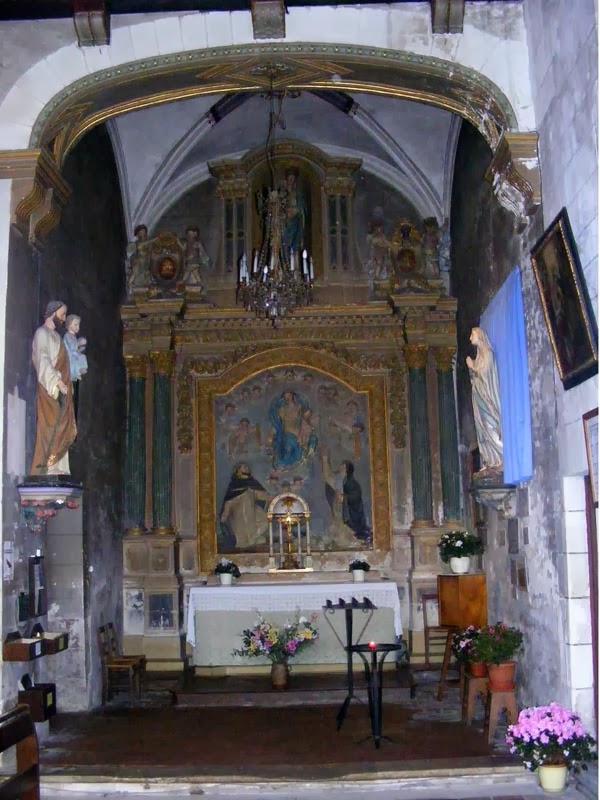 The vaulted ceiling of the crossing under the bell tower is 13th century. The clam shaped white marble font dates from 1494 and was made by Jérôme de Fiesole, an Italian sculptor working in France and employed by Anne de Bretagne.

The apse was made from cut stone although the rest of the church is rubble stones. The statues that once stood in the niches were destroyed in the Revolution. The seigneural chapel (south chapel) was turned into a sacristy in 1840. The large windows along the side were created in 1870.


The Judgement of Saint Eulalia by Lobin. 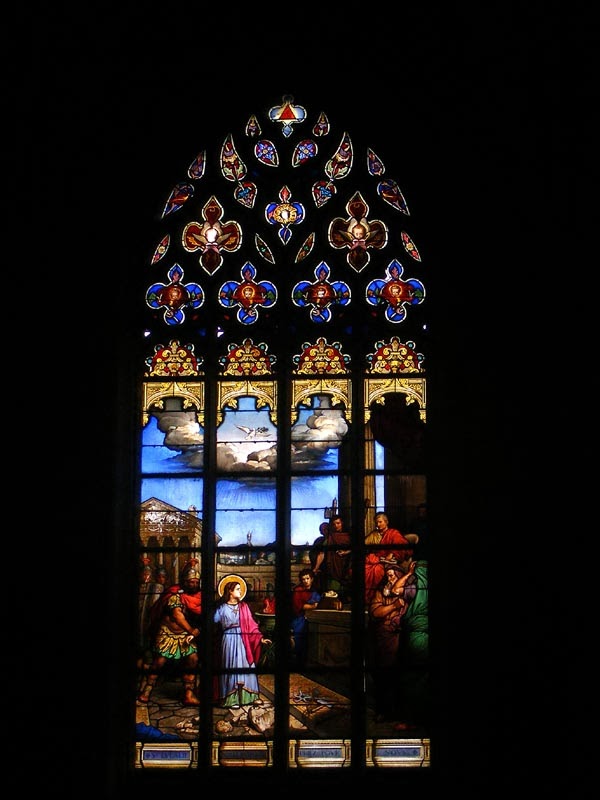 The stained glass windows were mostly created and installed after 1881.

In the apse:
In the nave the stained glass was made between 1881 and 1903  by J P Florence, master glazier of Tours and Lobin's successor. The Lobin workshop was extremely highly regarded and sent work all over the world, including the UK and Australia.

Most of the stained glass in churches here is 19th century, and not a patch on the original medieval and renaissance windows (which only survive in any quantity in the cathedral in Tours and a few other Touraine churches, such as Montrésor). Only Lobin, in my opinion, made windows that are striking enough to have much artistic merit, and even they suffer from those banes of 19th century art -- no sign of a sense of humour and an overdose of sentimental melodrama.

Thanks for that, Susan. The Genillé church is one I've never seen from the inside.

If you want humourless melodrama then you need to see the churches around Cholet in the Maine et Loire with their windows commemorating the Vendee wars .....white haired priests returning to their parishes after the Concordat, women on their knees, adoring faces turned upward.....

As I read through the periods of building...
I realised, that like many churches...
it is a right old bitza...
bitza this period..
bitza that.

To me, it is one the more interesting things in church architecture...
especially on the outside...
identifying the styles and building periods...
it was part of my O-Level Art exam...
and I had the Observer's Book of Architecture to help....
useless over here...
but you can still see changes in windows and doors...
be they blocked in, made smaller or larger, etc...
and I can't stand the painted scene "stained glass" windows...
with all their "...sentimental melodrama and no sign of a sense of humour" as you so rightly say...
Personally, that window isn't any great shakes either!!

Susan, I agree with Tim and yourself. Neither can I "stand the painted scene "stained glass" windows...
with all their "...sentimental melodrama and no sign of a sense of humour".

This is what Léon Bloy called "sulpician art", art sulpicien — after the many shops selling religious paraphernalia established around the well known Paris' church, Saint-Sulpice. Here is a link in French if you're interested:
http://fr.wikipedia.org/wiki/Style_sulpicien
and one in English:
http://www.danielmitsui.com/hieronymus/index.blog?entry_id=1839802

Tim: this is quite a striking window actually, as is the one of the crucifixion the other end of the church which is impossible to get a photo of because the gallery and the king posts get in the way.

chm: I suppose it is all part of the Catholic revival in the late 19thC. People were over eager to demonstrate their extreme piety.