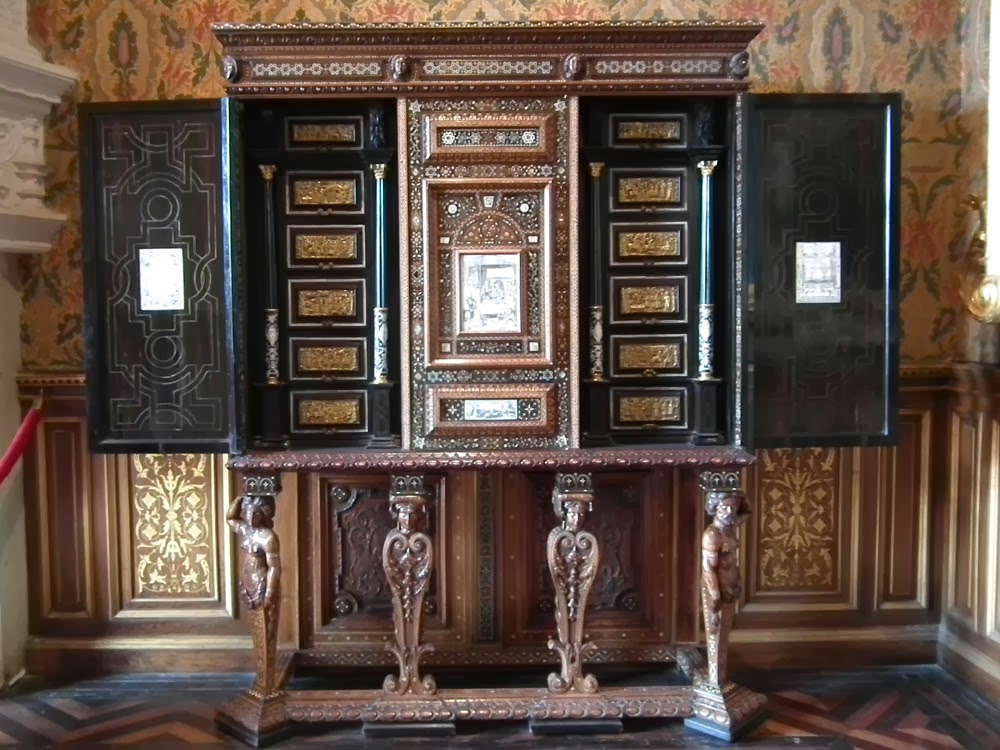 This magnificent cabinet was a wedding gift to François II and Mary Stuart in 1558. Mary, whose mother was French, grew up in the French court and had known young François most of her life. She was considerably taller than him, but apparently they got on very well. When François died of an infection in 1560, aged 16, her mother-in-law, the formidable regent Catherine de Medici, made it clear to the young widow that she was no longer welcome in the French court. She pushed off to Scotland and proceeded to cause herself a lot of bother.


Detail of the cabinet. 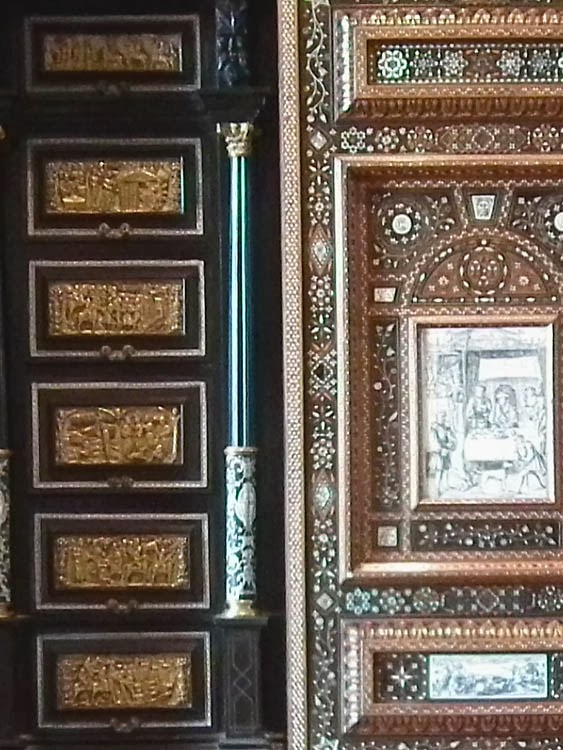 The cabinet was made in Italy in the late 15th or early 16th century. It is pear wood, which has been ebonised in parts to show off details such as the fine stringing on the inside of the doors. The drawer fronts are cast bronze and there are ivory panels with pen and ink sketches inserted into some panels. The inlay patterns are created with wood, ivory and mother of pearl. It is in one of the salons at the chateau of Chenonceau, a splendid addition to their collection.


17th century Italian inlaid cabinet at the chateau of Ussé. 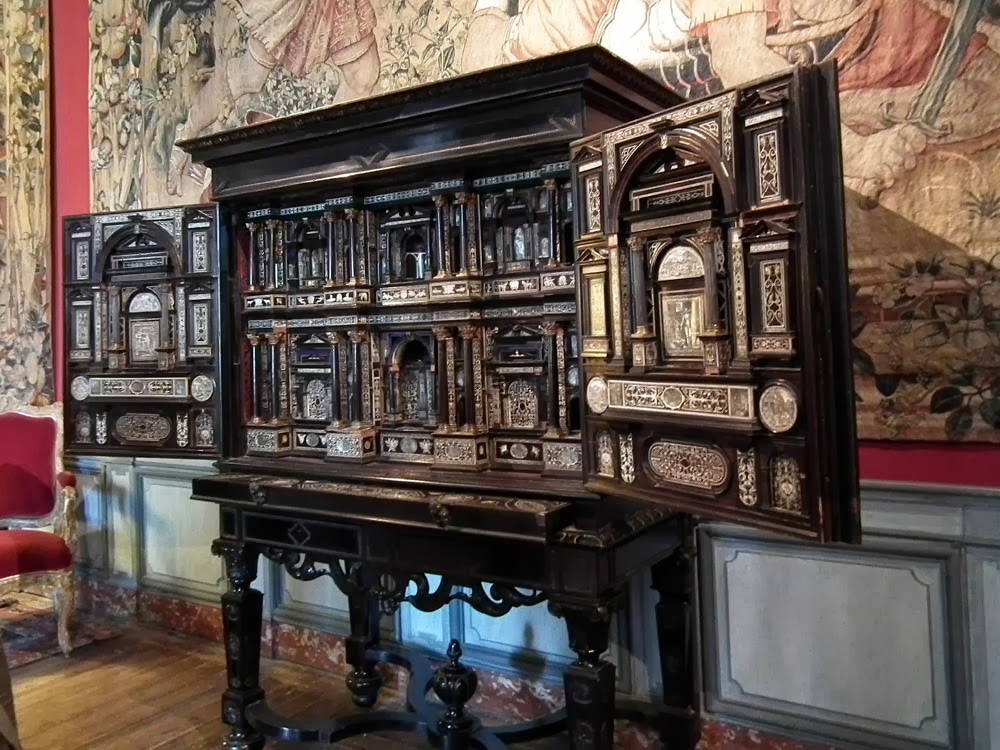 This second cabinet is part of the collection at the chateau of Ussé, and is inlaid with ivory and lapis lazuli. One very easy way to tell that this cabinet dates from a later century is to look at the base. It is here that there are very obvious stylistic differences. Renaissance furniture makers (16th century) delighted in making legs for cabinets and pier tables that were grotesque combi-beings. Frequently they created creatures that had their origins in two different and unrelated myths, and it is a fashion you don't see before or after the 16th century. The base to the Chenonceau cabinet is by no means an extreme example of this (check out some of the furniture at Azay-le-Rideau if you want to see some really scary creatures supporting tables) but the Ussé cabinet has a much more elegant and refined base.

Both these cabinets are inlay, not marquetry. The difference is that inlay is decorative veneer inserted into a solid background, whilst with marquetry, both the background and the decorative motifs are veneers. Marquetry developed from inlay, and the finest examples are generally from the 18th century.

Neither are these 'cabinets of curiosity' for storing a miscellany of natural history objects. This concept existed from the late 16th century, but didn't come to mean an item of furniture until the late 17th century. The Chenonceau cabinet has drawers but was probably really just intended as a piece of conspicuous consumption, a decorative luxury object with which to impress your visitors, more like a piece of sculpture than a piece of functional furniture. The Ussé cabinet is a desk, with secret compartments and a pull out writing ledge.

At 15.00 there is a forest walk with a forest technician from the National Office of Forests, starting at l'Etang de Ribaloche and including stops at workshops demonstrating work in the forest. Free, but reservations are necessary and the number of places is limited. In French.

At 20.30 there is a lecture on the History and Evolution of the Forest, given by Gérard Couturier, the forest technician from the National Office of Forests. It will be held in the Salle de spectacles in Charnizay. Free and in French.

*************************************************
Election News: Niall and Antoinette have posted an easy to follow summary on Chez Charnizay of the changes of rules at the ballot box this election. I was aware that depending on size of community voters can have the option to vote for individuals, mixing and matching amongst lists, or simply vote for a list. No problem with that concept, it's just like voting for the Australian Senate except your ballot paper isn't a metre wide with a dozen parties and squillions of names, however, Preuilly falls into the larger sized commune and we just get to vote for a list. What I have been mystified by is the notice at the town hall warning people that there is another important change, to wit, voters cannot just cross a candidate's name out and add another that they like better. It never occurred to me that up until this election voters were allowed to add random names to the ballot on the day!

When I was first in France a friend told me that the ability to 'write in' a candidate was to let electors break the monopoly of one list communes where the same people or families held office for generations.

Fly: I guess that makes sense.

Very interesting. They are quite extraordinary, aren't they? I particularly like the one in Ussé. What was the bother that Catherine de Medicis caused herself in Scotland?
I feel so much better about the flags. I suspected one might be aboriginal and I don't come from NSW! I just checked out the Queensland flag so I don't need to show my ignorance on that count!

It wasn't Catherine who went to Scotland, but Mary (aka Mary Queen of Scots). After a couple of poor choices of husband and generally poor political judgement, she wound up being executed by her cousin Elizabeth I of England.

If it's any consolation I wouldn't be able to identify any of the Australian state flags either.