Weather and Wildlife in the Touraine Loire Valley 2013

"Sunshine is delicious, rain is refreshing, wind braces us up, snow is exhilarating; there is really no such thing as bad weather, only different kinds of good weather." John Ruskin.


Personally I think he's overly enthusiastic about wind, but minor quibbles aside, his point is well made. Below are my notes about the weather and some wildlife highlights for 2013, made every couple of weeks and accumulated over the course of the year.

Jan -- early - fairly mild (not much frost, no snow) misty and overcast. Not much rain. Mild enough that hedgehogs emerged from hibernation, as evidenced by the occasional squashed one on the roadside. Likewise, badgers remained very active, with the same roadkill result. Marmalade Hover Fly Eristalis balteatus active. Mid - frost and snow, very cold windless days, a little rain. Late - back to mild, overcast weather (no frost, some rain). A few insects active. Small mammals appeared to be in somewhat short supply (burrows waterlogged), although I did witness a fox hunting in a field. Black Redstart in garden. White-tailed Bumblebee Bombus lucorum queen in orchard. Overall remarkably mild, but one of the 3 least sunny Januarys since 1950. 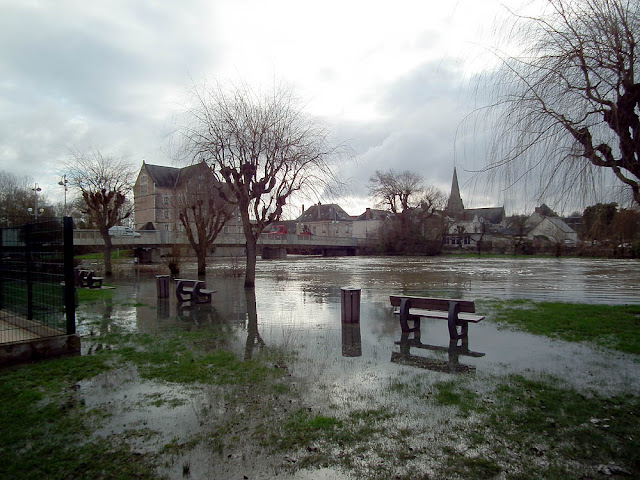 Winter overall: about average temperatures, with notably less sunshine and about 40% more rain than average. The overall temperature average is a bit misleading though -- in fact temperatures flucuated wildly, and whilst there were cold snaps there were also mild spells. Temperatures ranged between about -2 and +12 mostly, with many days never going below 0. Because of high autumn rain the ground was saturated and the rivers full, so the steadily wet conditions throughout the winter caused significant flooding of water meadows, and a lot of standing water, but no serious flooding.

March -- a couple of warm sunny days, but the heaviest frost we've had all year on several days. Cold days, some bright, some damp and overcast. Typical giboulées with squally rain, snow and hail all at once. Late -- mild (no frost), overcast (very little rain), with a brief cold snap the last few days. Apparently the least sunny March for a decade. The jetstream has been looped particularly low, over both northern Europe and north America. We've been on the fringes of the very cold weather this phenomena brings, whilst the Arctic ice began to break up at record speed and Greenland was 15 degrees warmer than us.

April -- early -- extremely variable, with some sunny but windy days and some miserably cold and drizzly days. Mid -- still variable, with much more sun, sometimes warm, but still often cold days. Deer in the fields seem quite numerous, attracted by the canola flowers, and a glimpse of a herd of wild boar with several really big pigs in the wheat one dusk. Squirrels have been very active all spring. This month finally the insects really got going, with many species of hoverfly and bee. Martins already nesting, swallows have arrived and the first swifts. A few bats flying in the evening. Overall a very variable month, with warm sunny days alternating with cold rainy days. My impression was of a fairly normal April, and the statistics bear this out. It was a couple of degrees cooler here than on average, and we had 50% more rain than the average, but levels of sunshine were exactly average. A light frost near the end of the month which damaged vegetable seedlings and newly emerging vine leaves. Since September last year we have received 25-50% more rain each month than average. The soil is saturated. 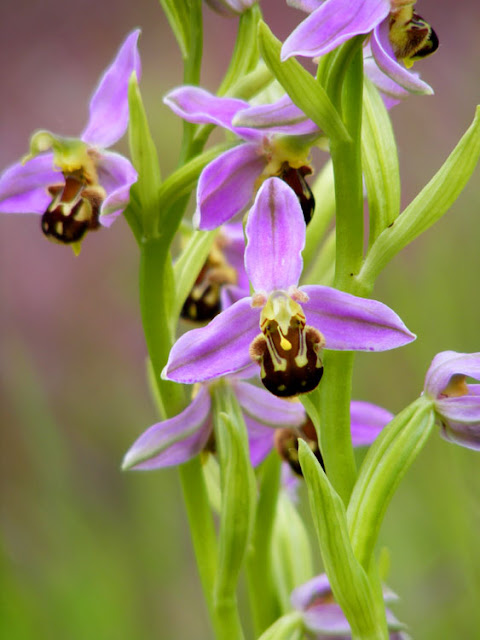 May -- cold (temperatures rarely reaching the 20s) and overcast. Like March, it was not that the minimum temperatures were particularly cold, but the maximum temperatures remained determinedly under par. Many days with a little rain. Butterflies were extremely 'thin on the wing'. Fortunately no frost. Still lighting the fire every evening though. The rivers continue to run high and in places overrun their banks, but no serious flooding here (some roads blocked, riverside carparks inundated). Average temperatures about 2 degrees lower than normal, rainfall about 50% higher, and it rained more than an average number of days, with sunshine at only about 80% of normal. The mammal roadkill seemed quite high this month, with more sad glimpses than usual of squashed badgers, martens, hedgehogs and squirrels. The deer population was clearly very high, as there were several local culls organised. The orchids, on the other hand, were magnificent, enjoying the cool (frost free) and moist conditions after a decade of dry springs. The second coldest May since 1950 and the wettest since 1959.

Overall, spring was very changeable, cold and rather lacking in sunshine. It was the coldest spring since 1987 and one of the wettest since 1959.

June - early - hot sunny days in high 20s (at last!), occasional storms or showers. Dragonflies emerging in earnest -- lots of Broad Bodied Chasers Libellula depressa, some Skimmers Orthetrum spp and quite a few Clubtails Gomphus spp. Lots of Banded Demoiselles Calopteryx splendens and Blue Featherlegs Platycnemis pennipes. Hymenoptera (Bees, Wasps, Ants and Sawflies) and Diptera (Flies) doing well, with good numbers. Butterflies very, very low in both total numbers and numbers of species. All the hivernales (overwintering species) have died. Only Adonis Blue Polyommatus bellargus in any numbers (and they are limited to the limestone ridges and chalk grasslands). Mid - cool (for summer) to warm, with rain most days, ranging from torrential downpours to light mist. Vouvray and Tours hit by a severe hailstorm. Late -- back to warm sunshine. Overall up to this point in the year we have had nearly twice as much rain as normal. 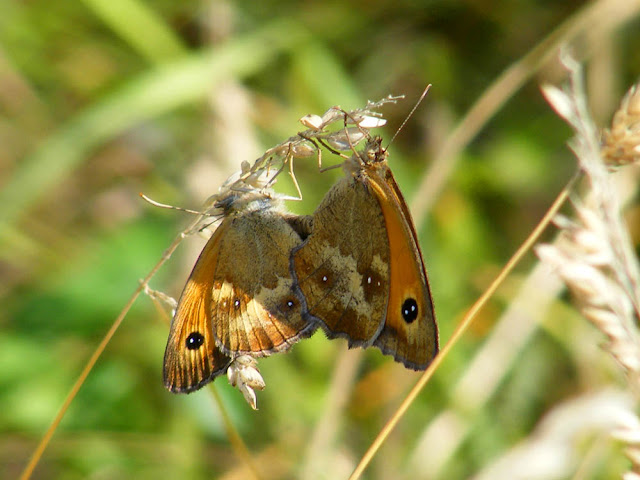 July -- early and mid - hot sunny days in high 20s interspersed with a rainy day about once a week. Butterflies finally more abundant, but some groups still woefully absent or meagre. The Tabanids (horse flies and their relatives) have emerged in earnest, with deer fly Chrysops spp and the beautiful, huge Tabanus eggerii much in evidence. Late -- hot, in low 30s, with some tremendous thunderstorms which were fortunately not all sound and light but gave quite a lot of rain too. One of the storms was noteable for the strength of the winds and there was a lot of leafy debris afterwards. Dragonflies in good numbers. Overall temperatures were about 2 degrees higher than average and this was the third warmest July since 1900 and the sunniest since 2006.

August -- early - warm (temperatures back down into the 20s) with frequent thunderstorms and some rain. Mid -- unusually warm, with temperatures reaching the low 30s some days, and dry. Large dragonflies in good numbers, including the generally less abundant species such as Goldenring Cordulegaster boltoni and Western Spectre Boyeria irene. Overall a hot dry month, with average temperatures but well below average rain and slightly above average sunshine hours.

September -- mostly warm and dry, but with a few extremely wet days. By the end of the month foggy mornings and drizzly days, much to the chagrin of the winemakers, who had mostly delayed the harvest on the basis of the earlier warm dry days, hoping to catch a little more ripeness after such a late start this year, but only to find themselves risking fungal disease instead. Lots of roe deer in the fields in the early mornings and evenings. Overall warm, with average rainfall, but a bit low on sunshine in the end.

October --  early -- mild and humid with some real downpours. Mid - a cold spell but continuing damp and warming up again. Late -- wet and windy, getting a bit colder. Large numbers of Common Winter Damselfly Sympecma fusca in the orchard, taking advantage of all the long dead seedheads that I have not been able to mow off due to the weather. They can drift about in safety, barely visible in the waving brown long vegetation. Overall October was unusually warm and wet. The 6th warmest October since 1900, with temperatures 2° above average and 50% more rain for the year than average up to the end of October. The mildness was mainly due to the unusually high minimum temperatures, but sunshine hours only just managed to reach average.

November -- early -- mild and wet. Barely any frost and remained relatively mild throughout, although got colder towards the end. A remarkable number of Clouded Yellow butterflies Colias croceus still on the wing. Overall average temperatures, very wet and somewhat low sunshine hours.

December -- early -- a mixture of fog and clear sunny days, quite heavy frosts and cold days with temperatures from below zero and to maximums in single figures. Mid -- a wonderful dry cold snap with hoar frost and brilliant sunny days. Late -- a couple of very windy days, rather mild temperatures, some  grey days with rain, a few quite sunny days. The year ended remarkably mild and rather wet.

Overall for the Year: Temperature wise it was a cool year, but with July to October warm, bringing the average overall temperature back up to the normal annual average. Rainfall wise it was a rather wet year, with about 10% more rain than normal. Sunshine hours were slightly lower than average.

March and May were particularly grim, being cold, very wet and worst of all, very low on sunshine. There was a particularly wet spell in June, with a tremendous hailstorm. July was hot, but by October it was back to wet and windy.

UPDATE: For other local overviews of the weather in 2013, see Tim's report on Aigronne Valley Wildlife (he's in the next valley across from us) and Walt's report for a hamlet about an hour to our north near the Cher.

*********************************************************
Lunch Yesterday: We went over to Angles sur l'Anglin yesterday for lunch with our friend who writes Restless in France. She did us proud with a spread that included lumpfish roe on oat biscuits, mushroom roulade, moussaka, some interesting cheeses we'd never encountered before and a buche de noel. We were so busy eating, drinking and talking it was 5 pm in no time and we hadn't been out for the planned walk around this most picturesque of villages. We hurried out into the gloaming and did a quick twirl down to the bridge and back up la tranchée des anglais (not something I coped terribly well with doing at Simon's speed and after a serious meal).
Posted by Susan at 09:00