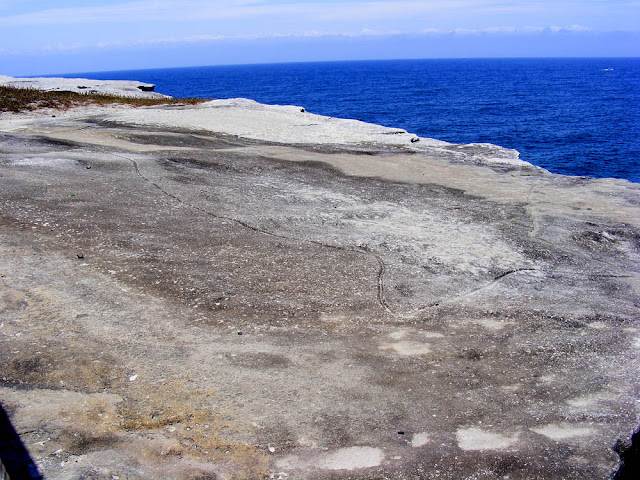 The tail of the fish.

When we did the Eastern Beaches Coastal Walk,our friend Stefania pointed out an Aboriginal rock engraving to us. She's a qualified eco-guide with a particular interest in Aboriginal cultures, and it was just as well we had her with us, as we would never have noticed the engraving otherwise. 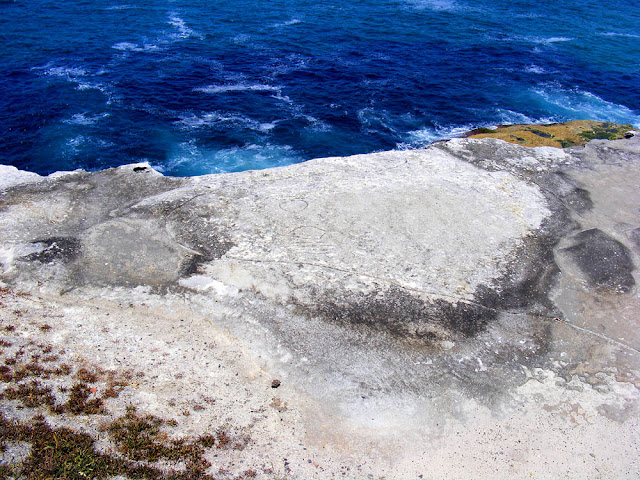 You can only just make out the engraving in this photo, and that's after I have lowered the brightness and upped the contrast in PhotoShop.

It is quite weatherworn, being right on the seacliff. It depicts a large fish with gills, either a sea ray or basking shark (although the aboriginal story calls it a whale). There is an excellent web page here which tells you all about it, including relating the Dreamtime story associated with this site. 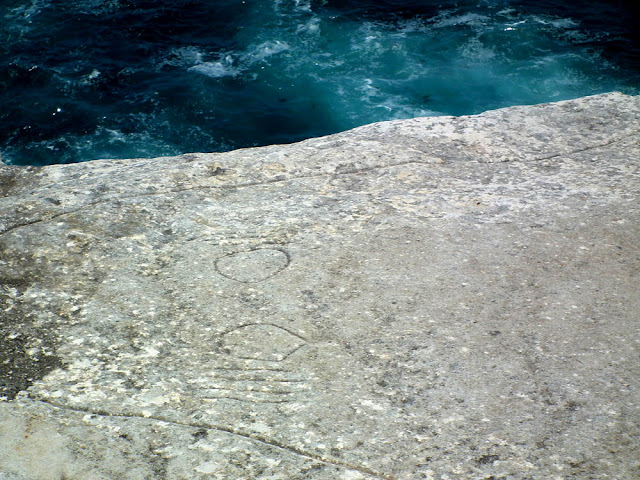 The eyes and gills.

Dreamtime stories typically describe ancestral totemic animals creating the landscape or establishing some rule of how you should live your life. The stories coalesce to form songlines, which act as oral maps, passed on to all those who have an association with the land. The songlines allow a nomadic people with no written tradition to pass on information about routes and how to survive along the way.
Posted by Susan at 09:00

In a less sophisticated way, this sea creature is evocative of the Nazca Lines.

The third photo helps understanding the second one.

Growing interest in archetypal journeys has brought opportunity to experience unique indigenous nightsky gazing, fire ceremomies sparking dream-making known as circles of becoming.
Somewhat west of Alice Springs in heart of the outback on journeys magical, women tell stories, dance & dream, circle sleeping snug in a swag on a dry river bed, riding the starlight together. Desert night skies where indigenous 'Emu' is glimpsed in the Milky Way brings closure and a changing awareness to the unsuspecting. Pretty heady stuff!

The use of pictures and song in societies devoid of a written cultural record is wonderfully ageless...
everytime I find an artifact here...
usually while digging or weeding the potager...
I think of the human life that has passed this way over the last umpteen millenia.

Really, even the written record, up to the Revolution in France, is quite poor...
usually focusing on the "winner's" version of events...
and almost never telling the real person's view, life or beliefs!!

But the tradition of storytelling has long gone...
just a few "excentrics" keep it going...

And what if the Interweb vanishes...
all the "human" stories, kept mainly in the blogs...
would vanish into the "Ether"....
especially now we have the "Cloud"....
clouds tend to evaporate!!

On the storytelling line...
the Museum of Grand Pressigny had an exhibition of the similarity between Papuan & Samoan cultures and their prehistoric counterparts a couple of years back...
it noted how the modern "prehistoric" civilizations still keep the record going by storytelling.