A Gîte in the Orchard

A month or so ago my friend Rosemary did one of her regular 'Friday's French' blog posts about the word gîte. Many people know this word in the sense of self-catering holiday accommodation in France, but there are several other distinct meanings to the word, including as a cut of beef. 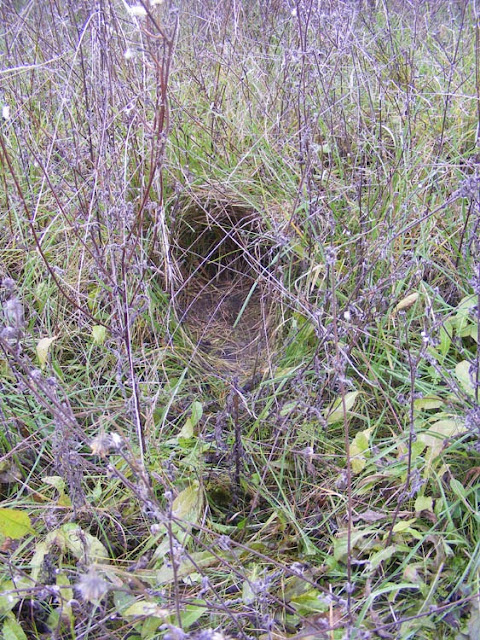 Rosemary pointed out that Larousse specifically mentions the cosy little resting place in long vegetation that a hare will make for itself as being called a gîte in French. In English it is called a form. 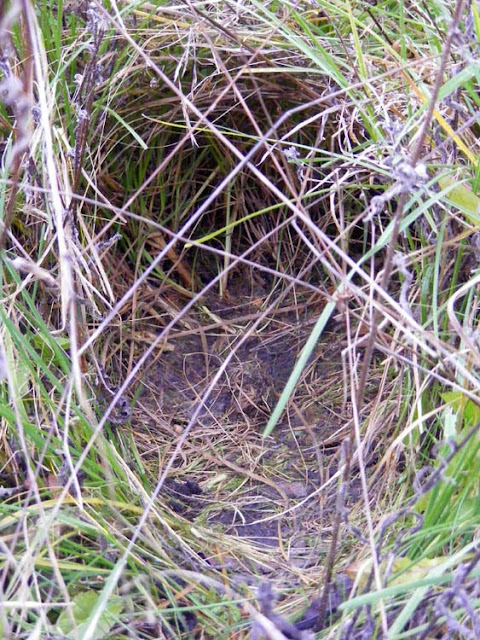 A few days after she blogged about the word, I happened to disturb a hare in the orchard, so I photographed the hastily vacated gîte and thought it made a good follow up to Rosemary's post.
Posted by Susan at 09:00

Looking at the ground inside the 'form', it very regularly uses that spot...
you should now be able to visit with a camera...
and do a follow up to this follow up!
It is nice when you can see such a clear sign of regular use as this!

You can delete this... did you read the further Traction Rubber addresses I added to those comments last night.

I'd email, but I can't from this machine!!

There are two clear "dead ground" footprints from the huge hind feet...
and so little other disturbance...
I just don't think that it goes in headfirst and turns...
the grass at the back is so perfectly "hare-bum" shaped.

[You'll also probably be interested in the latest and the next few posts coming up on Touraine Flint...]

Tim: I thought the form looked regularly used too. They must sit in them facing outwards so they can shoot out when alarmed. I think they goin in and turn around though, I just can't imagine a hare shuffling in backwards. I've never encountered it again in this form though, and it is now more or less destroyed by the weather. It created a whole series of them closer to the potager, so I think it creates a new one every time it stops for a rest. I had hoped it had moved in to the orchard, but I haven't seen it the last couple of times I've been down there.

Tim: yes I read your comments with the details of rubber seal suppliers, many thanks.

Gîte, when it is a feminine noun, means bank angle. So there is a difference between le gîte et la gîte.

chm...
That applies very aptly to the hare as it jiggs away from the form then...
but you need to calculate the angle of bank...

Or were you refering to miss-selling?

Thanks, Susan, that's a perfect illustration of a gîte. I can link it to my post now.