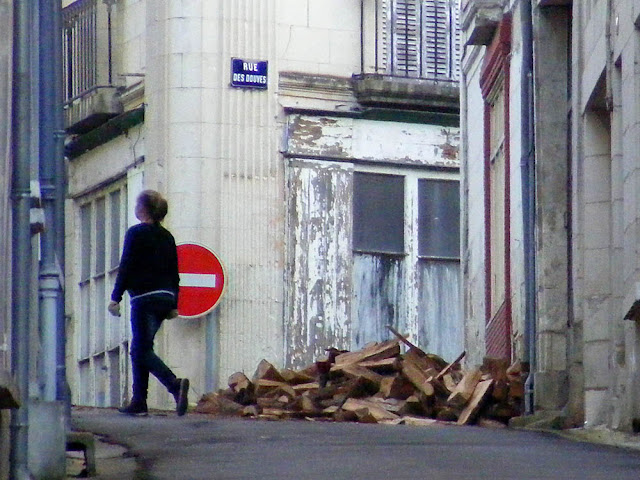 When I came back from an afternoon of working in the orchard on 10 January last year, I discovered the end of the street had been blocked by someone's firewood delivery. Most of the houses here are right on the street, and many don't have a back entry for deliveries. The only thing to be done is to dump the wood on the street. Drivers in these old villages take this in their stride and are rarely very put out by having to back up and go round another way. This house has a garage opening on to the street, so within minutes there was a swarm of teenagers taking logs and stacking them safely away at the back of the garage. An hour later, when Simon and I went out to the mayor's New Year ceremony, you would never have known there had been a pile of wood there at all. The street had been so thoroughly cleared they must have finished by sweeping up the chips.

I was on the impression that to make a béchamel sauce you had to use butter and real milk. Not anymore? I'll try Ms. Monroe recipe with oil and dry milk. I'm not too optimistic, though!

chm: part of the exercise was to recreat a supermarket ready meal. She said in a newspaper article about this project that normally she would use butter, not oil, but she wanted to make the challenge as fair a comparison as possible -- the supermarket lasagne listed oil as an ingredient. She does make the point that for this sort of thing, if cost is important then powdered milk is a considerable saving and there is no appreciable loss of quality or nutrition. She is an activist and is making a socio-political point as much as cooking.

Making a roux to start the sauce is exactly the same whether you use oil or butter and it works fine in terms of consistency. I didn't use powdered milk though.

I would note that this recipe relies on a very limited range of ingredients, two of which are very highly flavoured and dominate (the tomato paste and the herbs). It is remarkably like a good ready meal, but not really the lasagne you might normally choose to make.

I really don't understand why she would want to reproduce a 'ready meal'.
Wouldn't it have made more sense to have made a proper lasagne?

And I always wonder what her tattoos cost.

HD: I can absolutely understand why she did it. It's because real lasagne contains loads of ingredients and takes time to make. She is trying to reach people who, like she once did, think that ready meals are cheap and nutritious and that they can't cook or don't have the time. I know she's currently the Guardianistas culinary darling, and that should make one read her with a certain wariness, but I think she genuinely got off her arse and achieved something for herself and deserves some slack for a few of the more cranky left wing notions she holds.

I hadn't noticed she had tattoos but imagine that there are all manner of perfectly reasonable explanations for how she afforded them that don't include her stealing the food out of her baby son.