Walls (les murs)
The walls are very largely made of stone. Without question, tuffeau is the most characteristic construction material in the Touraine Loire Valley. Tuffeau stone is a soft friable limestone, coloured off-white or yellowish. The tuffeau was formed over the course of the geological period known as the Turonien.


Closest to us, a smooth rendered wall with just the quoins (chaînage d'angle) and surrounds (encadrements) showing in cut stone. Further along the render allows the rubble stones (moellons) to be visible through it. 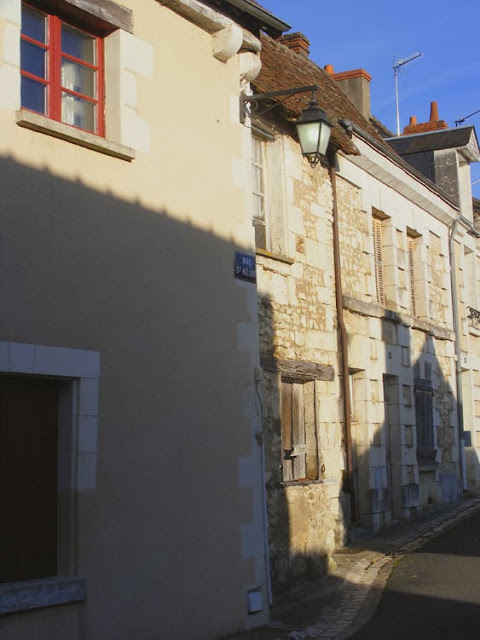 A fine cut stone (pierres de taille) town house, showing the effect of weathering on the stone on the left. 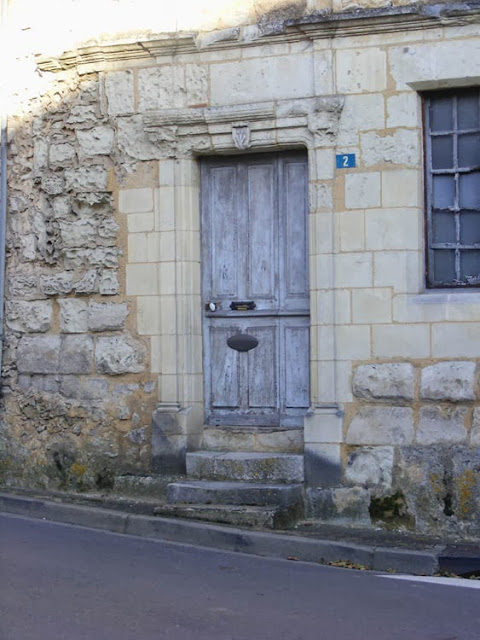 Other quarries were dug all along the Loire, the Vienne, the Indre and the Cisse. In the Touraine, cut tuffeau stone was not just used for the construction of grand royal residences and merchants' town houses, but also for farm and village houses, barns, enclosures and vine huts.


Walls of rubble stone visible through the render, with cut stone quoins and surrounds. 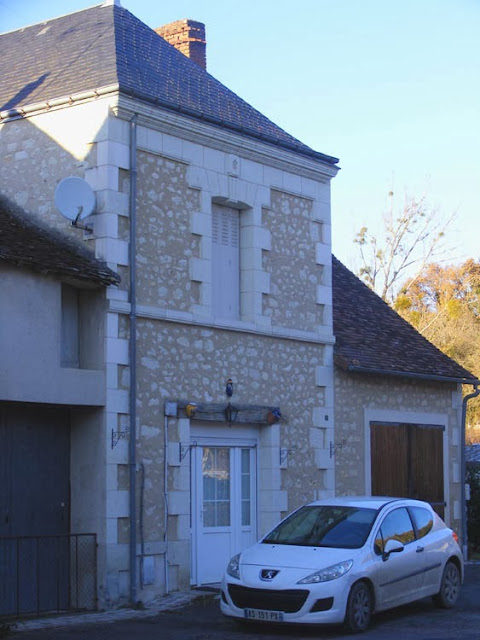 As well as the cut stone (pierres de taille) walls, many buildings, especially in the countryside, are constructed from field or rubble stones (moellons) composed of limestone, sandstone and flint. Field stones are covered with a render (enduit) which was based on sand (sable), mixed with a binding agent (either quicklime chaux grasse/chaux aérienne or hydraulic lime chaux hydraulique).

The render forms a protective sleeve for the walls, also allowing the exchange of humidity between interior and exterior. Sometimes the field stones are visible through the render. 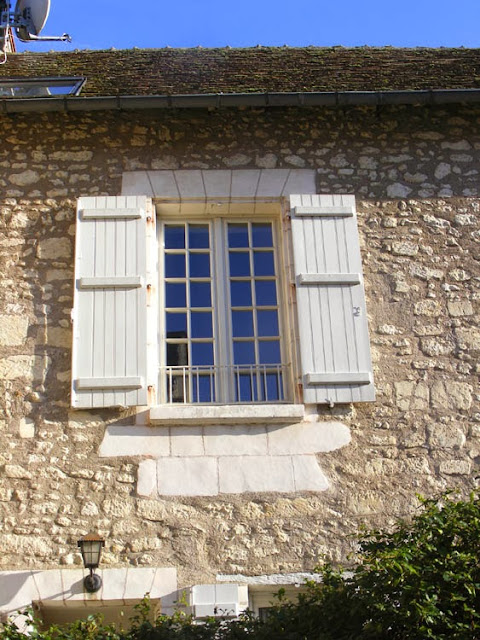 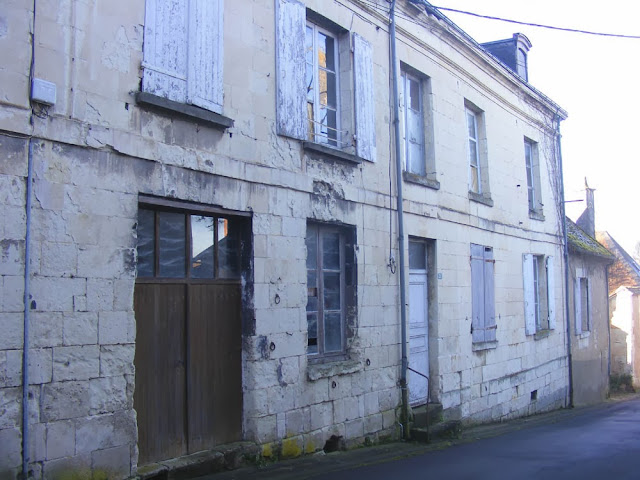 Terracotta (terre cuite), practically absent in the construction of walls in the Touraine, is reserved for chimneys, roofs and floors. All the same, it is not uncommon to see brick clearly visible in the rendered walls. You see it tracing the path of the chimney through the wall, as the infill on timber frame (colombages) buildings or used on window surrounds. Numerous tile and brick factories existed in the Touraine Loire Valley in the 19th century.


Two different rendering styles, one with just the surface of some rubble stones appearing, one with all stones visible. The building closest is made of a much more mixed batch of stones. 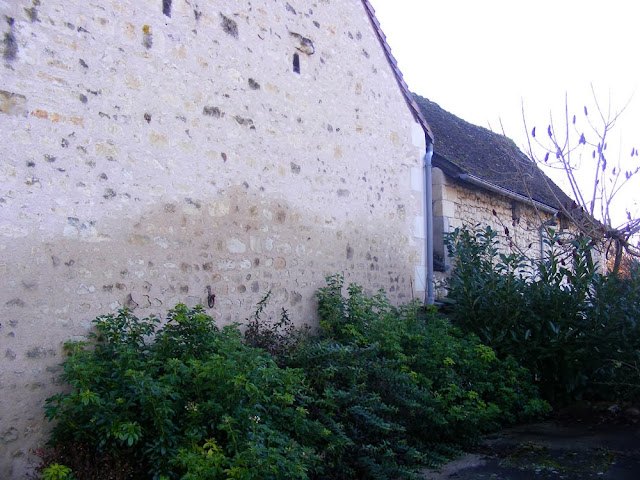 For all restoration of render it is recommended to use a traditional render of natural lime which allows the stone to 'breath' and as a result, discourages the appearance of damp spots or moulds on the surface of the walls. With respect to the local tradition, the colour given to the render by Loire river sand is favoured.

UPDATE: In response to the question about render from Carolyn in the comments.

Render is a paste that is applied to walls with a trowel and more or less smoothed, as a protective and aesthetic layer. It can be cement, stucco, plaster or lime based. In the case of the buildings above it should always be lime based (a mixture of nothing more than lime, sand and water). It is intended to be sacrificial, that is, it takes the brunt of the weather and protects the structural fabric of the building underneath. The expectation is that it is replaced periodically. It can be used on both interior and exterior surfaces. We have written about using lime render on our own house here and here if you want to know more or see pictures of the process.

******************************************************
Magazine Back Issues Offer: If you would like any back issues of The Garden (one of the journals published by the Royal Horticultural Society) or British Wildlife and can pick them up from our place, you would be very welcome to have them. Both are highly regarded publications, suitable for reasonably serious amateurs and professionals alike. If no one wants to give them a new home I will take The Garden to the recycling, although I will keep the BW. The index for The Garden is here, if you want to cherry pick (pun intended) and just search for magazines with articles of interest to you. I can't guarantee to have every issue. The index for BW is here. I have 1997, 2009-11 of The Garden and 1999 - the present of BW. I also have Butterfly, the magazine of Butterfly Conservation UK from 2009 - the present which anyone interested in is welcome to. This last is much more of a membership magazine, for the concerned and interested amateur, but does have one or two short but interesting articles per issue. They don't produce an index for it. Email me (via my profile on the right sidebar) if you would like me to put any of these aside for you.
Posted by Susan at 09:00

Email ThisBlogThis!Share to TwitterShare to FacebookShare to Pinterest
Labels: Chaumussay, Pictures of Preuilly

"deposited in the Middle Turonien. It is a 'noble stone' par excellence, a white rock enriched with micas and quartz crystals. It is this tuffeau which....
was imported from France to build some British cathedrals, eg: Norwich!
It is the glow it returns in sunlight that makes it so "bootiful"...
the native UK limestone is like John Major... rather greyer!!

The cut stone, former hostel has an amazing collection of rein rings on the front...
for all sorts of height hosses?

Re: BW mags..
yes please...
just tried to ring you, but your fone isn't working!!

Tim: Norwich cathedral is Caen stone, a much older deposit of limestone.

The hostel had a blacksmith's workshop at one end. I've always assumed that partly accounts for the rings.

I've just tried to ring you but you were engaged. Our phone seems to be working from our end, but we often have trouble with the line.

Turonien = "of Tours". Beautiful looking stone but it only takes one to crumble. Lovely photographs of features we probably wouldn't notice and really should pay more attention to.

I've come across the word "render" in English books, but it's not commonly used as a noun in the US. Would you please "render" a definition so that an American can understand the term?

Another one of those situations where we're "divided by a common language."

How right you are about the importance of the nature of the enduit.
We had a house of the moellon wall and tuffeau quoin construction - but built on granite, which did not allow for rapid drainage.
Thus there was damp which various owners had attempted to cure by plastering the walls with cement render, which promptly acted as a wick drawing the damp up still further.
We had to remove all the cement, let the walls breathe for a year, and then just pointed the stones.
The tuffeau mouldings around the doors and windows were distinctly the worse for wear, so my husband rebuilt them using Patrimoine....which at first would not stick - it kept blowing - until he tried using Unibond first.
That worked and he was able to build up the mouldings in thin layers until they were back to their original beauty.

HD: The cement would have been a far greater problem than the granite foundations. Genuine rising damp is a rare phenomenon, but the way water tries to exit an old wall often looks like what people call rising damp. Anyway, you did exactly the right thing. Patrimoine is such a boon to the tuffeau home owner (for those who haven't encountered it, it is basically powdered tuffeau that you reconstitute). Interesting tip about the Unibond.

Susan, I was aware that the Norwich stone was from Caen... but it has the same "glow"... Portland Stone just doesn't!!
A weak solution of Unibond...
or just plain PVA [cheaper] is a marvellous binder...
it penetrates very deep into powdery stone, old plaster [in small patches], Norfolk soft brick, etc...
and even on old distemper...
where it gives a very good adhesion for layers that follow.

Used in a greater concentration, it makes cement waterproof at the same time....
I used the latter for my Caithness Slab floor in Caithness...
I put black Mortex with cement and Unibond to make a black, waterproof jointing for the floor...
result, no need for damp course...
Caithness Slab being totally impervious!!
Looked damned good too!

The brick seems to be borrowed from Sologne as it is often combined with tuffeau here.
I didn't know the word "quoin" and neither did JM.
I loved the little video.

Fraussie: most brick in the Touraine is post-1850, when bricks became cheap and plentiful. Brick was adopted for chimneys because tuffeau doesn't cope with heat very well. The decorative use of bricks around windows was a fashion adopted from other areas such as the Sologne and northern France in the 19th and 20th centuries. I think you are right that in Blois there is cross-fertilisation in terms of architectural styles between the Touraine and the Sologne.

The etymology of quoin must be the French coin. The 'qu' rather than 'c' is an alternative English spelling from the 16th century that stuck.

Very interesting words/pictures. I am currently looking to build a house in the Tours region of the loire valley from local stone and from what i can make out it all appears tuffeau limestone is this correct? The issue is the house is proposed with a steel frame and the stone cladding as a panel system hung from the frame. I am worried that tuffeau is not strong enough to be cut into thin panels! Does anyone have any knowledge of this?

The local limestone comes in different grades. I would talk to some quarries and masons about what you want to do.