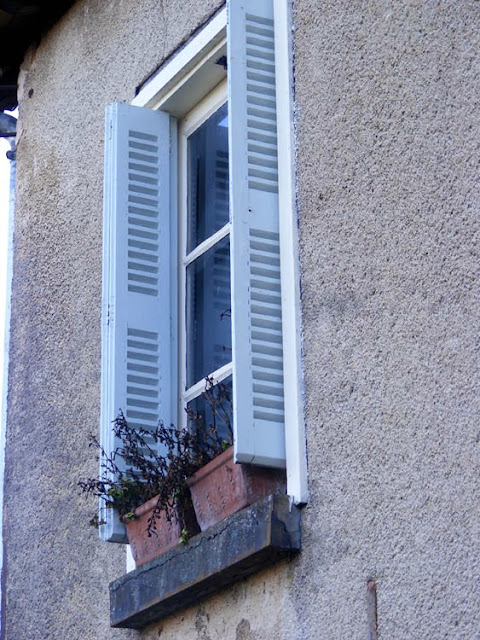 
This type of window is frowned upon as it is wider than it is high. 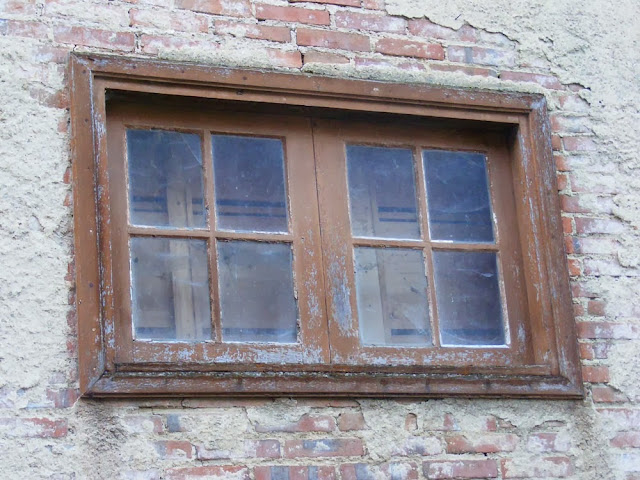 Openings (les ouvertures)
Arranged on the facade with the best aspect they circulate air, light and heat. Openings have proportions so that they are higher than they are wide. The bay surrounds are treated in a manner that is decorative against the rendered surfaces of the walls. The materials used for the surrounds (encadrements) and lintels (linteaux) are cut stone and sometimes wood. Above the openings are monolithic (single slab) lintels or bands of voussoirs (wedge shaped cut stones with a central key stone claveau). The sills (appuis), projecting slightly, are formed by a single stone inserted under the jambs.


Note the band of voussoirs, louvered shutters, three panes of glass per casement. 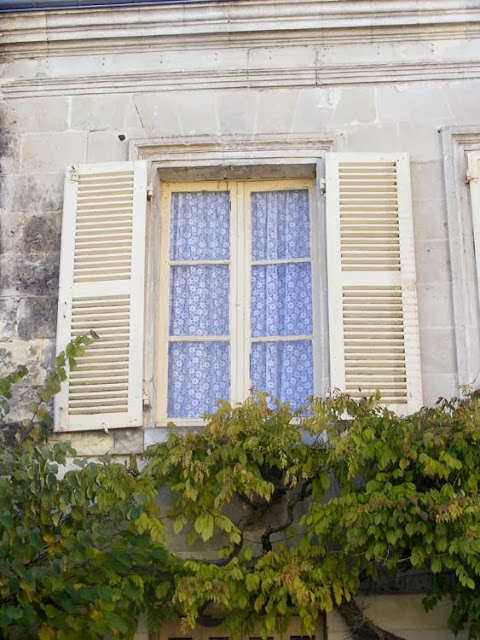 Joinery (les menuiseries)
Traditional joinery was made of oak, a favoured material chosen because of its resilience and longevity. It was painted which protected against the natural effects of climate and wood boring insects. According to tradition, houses differentiated themselves from one another in the choice of colour which could be expressed freely within the limits of the local hues. Historically, the colours used on joinery got lighter over the course of the centuries. Therefore it is best to use sombre colours (dark grey-greens or grey-blues, ox-blood red) for buildings before the 19th century, preferably leaving the lighter colours (pale greys, grey-greens, grey-blues) for buildings of the 19th and first half of the 20th century. Generally it is better to use colours which are more subdued than the render. In addition, for structural wood, the traditional technique is to limewash them (badigeonner d'un lait de chaux).


Some charming windows with non-traditional elements that nevertheless I am sure would be approved of by the Fondation du Patrimoine. 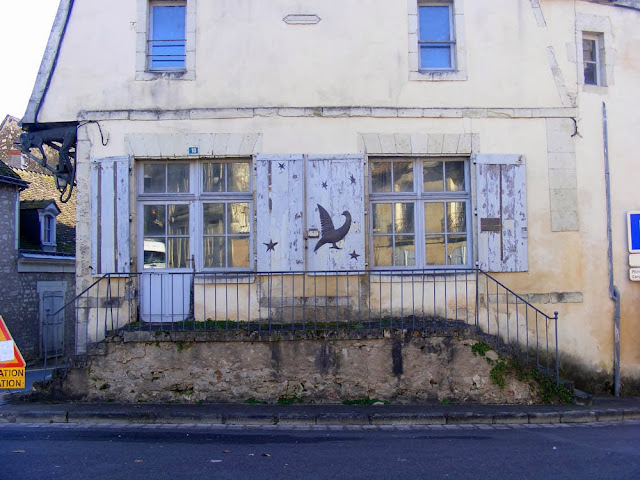 Windows  (les fenêtres)
The main windows make a dominant vertical with two casements (vantaux) composed of three or four big panes per casement. The panes are higher than they are wide. 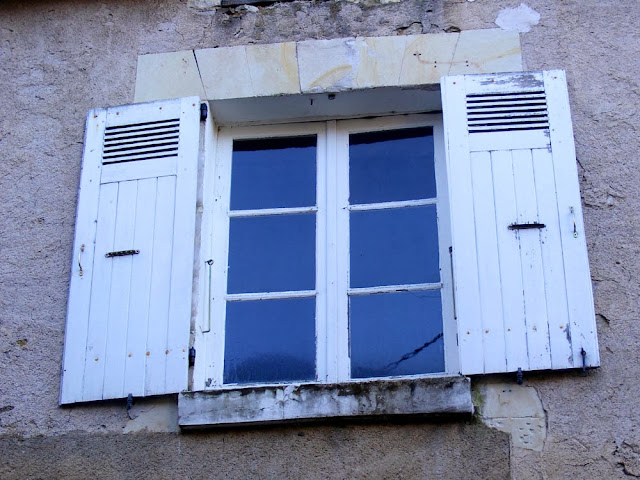 Secondary windows, of smaller dimensions, only have a single casement, divided into four panes or even just one pane for the smallest of them.


A secondary window of four panes.
The shutter, with its diagonal brace and the wooden windowsill do not fit the traditional style for the Touraine. 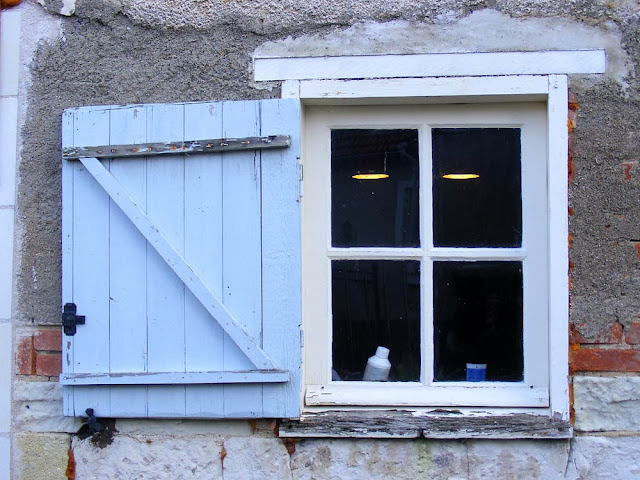 Shutters (les volets)
Most often the windows of urban houses (maisons de bourg) are fitted with semi-louvered (semi-persienné), plain or fully louvered (persienné) shutters. These are usually flat and open to sit against the wall (volets à battants) , but you can also have hinged shutters in wood or metal that fold into the window recess when open (volets rabattables en tableau). Rural houses (maisons rurales), with more concern for protection, have plain shutters with horizontal reinforcement (volets pleins à barres) in wood or ironwork. To allow ventilation these shutters are often augmented with little openings in various decorative shapes -- hearts, squares, trefoils, lozenges. The shutters on a traditional house are wood painted in the same colour as the outer window frame. 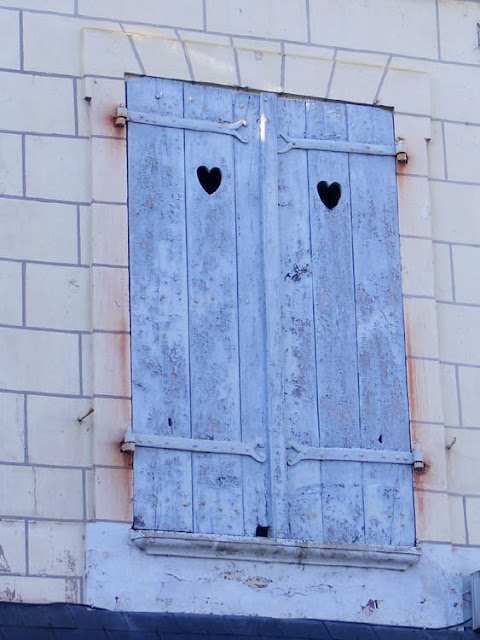 In Summary
For the openings as a whole it is important to respect the proportions and the colours so that the final effect is of blending into their immediate environment. Openings must always be higher than wide (windows and skylights/roof windows) and the colours chosen for the joinery as a whole, and particularly the shutters, must remain discreet. Avoid colours that are too bright and don't integrate well with a traditional building.

Very interesting post, Susan. Thank you. We do not have a single outside shutter on our house although the hinges remain on the last part to have been built. All our two-part shutters are inside and none are persiennés. We have wooden panels on the doors. Do you know when shutters were first introduced in Touraine? Just as a reminder, the main part of our house with its fenêtre à meneau was built in 1584.

Fraussie: I'm not expert enough to give you a really good answer. Shutters are older than glazed windows, so houses have always had shutters over the openings where they may not always have had windows. My guess is your current shutters date from the first half of the 20th century. For an idea of what 16th century shutters and windows looked like, the 19th century repro ones at the chateau of Azay le Rideau give you a good idea (inside panelled shutters attached to the window frames and in sections so you can open top, middle and bottom separately). This sort of window existed in both town and country houses of comfortable circumstances. Lower status windows would have had plain external shutters. Louvered shutters don't appear until the 19th century.

It's interesting that every window in our 1960s vintage house is wider than it is high — even the bathroom window. The big window openings were one of the things that most attracted us when we were looking for a house to buy. The light is great, even in this gloomy winter season. The problem with very wide French windows is that they open into the room and sweep across most of the space. We've replaced most of ours with sliders now. They are much more practical.

Ken: the 60s and 70s are a notorious period for lack of interest in the built heritage. A lot of old places were torn down and a lot of new places built in styles that wouldn't get past the planners now.

I guess it's not a good idea to believe in progress. Mais on ne l'arrête pas !

Ken: I agree that regulations to protect heritage can end up being applied in a very formulaic way if not administered in an informed way. The windows thing is a matter of aesthetics, as much as anything, but as John pointed out earlier, tall narrow windows are structurally stronger too, so there is a practical element.

Susan, did not get around to looking at your latest architectural instalment until today. Not quite sure where the received wisdom or authority resides when it comes to matters such as paintwork colour; but it is interesting that the Bâtiments de France architect who vetted our recent application not only specified a middle grey with a hint of blue for windows, but also explictly stated that door paintwork should be darker than that for other joinery.

In addition anything white, too light, or wood coloured, is proscribed. I think this means in practice that varnishes are also out – something I agree with certainly. I had never been quite so aware of the many variations of raw and synthetic toffee/yellow coloured varnishes till coming to Touraine. Sometimes I look at these finishes and think 'curry'.

John: the BdF architects are considered the authorities, but only have an advisory role and in fact can be over-ridden by the local mayor. BdF architects all have their own particular preferences too, within the basic understanding of what is appropriate. The one you had would have been speaking specifically about your house, basing their advice on what was around you, and the age of your house -- darker colours, older house. I'm working from a booklet that is necessarily a fairly brief overview of the whole department.

I'm glad to hear white is banned -- it looks terrible, but I've not seen it expressly banned (except that you are told the paintwork should be darker than the render). Blanc cassé (off white) is allowed for 19th century houses.

Our neighbours were asked to repaint their shutters and front door as they had done them a slightly too pale shade of grey green. They were also told that bare or varnished wood was OK so long as the wood was oak. If you use exotic wood it must be painted. I know what you mean about the range of utterly hideous 'natural' wood on show. People don't seem to realise that all the LePeyre and similar windows and doors must be painted, not left orange. They actually have labels telling you so on them and it's an issue of weatherproofing as well as aesthetics.