Sending Christmas cards is not really part of the francophone world, but it has been the practice in the anglophone world since the mid-19th century.

One of the most common motifs on Christmas cards was, and is, the European Robin and until recently, I didn't know why. I just assumed it was because it was a nice chirpy little bird, popular with gardeners because they can be quite confiding and tame. They have the added advantage of being quite brightly coloured, for a European bird, and of looking charming in seasonal scenes with snow and holly. Christmas card sellers have always had the bottom line in mind. 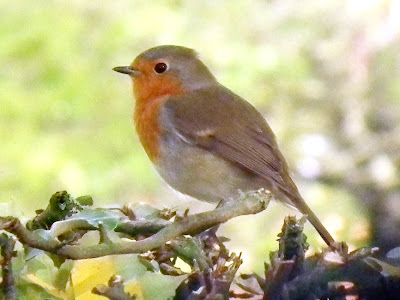 However it seems there is another seasonal and cultural association. Postmen in Britain used to wear red uniforms and were nicknamed 'Robins'. By the 1870s the deluge of Christmas cards in the system was causing business men to complain about the interference to 'legitimate correspondence' and the Post Office took to appealing to the public to 'post early for Christmas'. It didn't help much and right up until the early 1960s there was a postal delivery on Christmas Day.

If you want to post us a Christmas card from Australia or the UK today is your last opportunity to get it to us on time. Please don't be offended if you don't get one from us though, as we no longer send them - opting instead to send a New Year ' round robin' email (now where does that expression come from?)

Letters to Santa must be posted by 14 December.

The modern use of the term Round Robin dates from the 17th Century French ruban rond (round ribbon). This described the practice of signatories to petitions against authority (usually Government officials petitioning the Crown) appending their names on a document in a non-hierarchical circle or ribbon pattern (and so disguising the order in which they have signed) so that none may be identified as a ringleader.

I have learnt a few things today!! Diane

I tried to post my cards today and the postbox was so full they all fell back out again. I had to take them inside and queue up to hand them in over the counter.

Here in the US, the Christmas
card bird of choice is the red
cardinal, always picturesque
in the snow or sitting on a
bough of holly.

The robin traditionally got his red breast when he pulled out a thorn from Christ's forehead at the crucifixion (from the crown of thorns)so he's really an Easter bird. They're a cheery sight in winter though.