Yesterday was my birthday and we went to the Relais de la Mothe in Yzeures-sur-Creuse for lunch to celebrate. This is the first time we've been since the change of ownership and name. It used to be La Promenade and we were curious to see the results of the refurb and new chef. 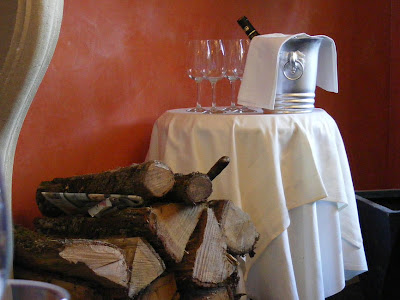 The changes start from the street - the very entrance is different. Instead of going in the front door you enter through the gate into the courtyard. The dining room is no longer on the street front but across the courtyard. The decor is now updated to rich terracotta walls with a stone fireplace and interesting lighting. The tables and chairs are a pale French grey, the linen white and simple. But some things haven't changed. The waitress is the same person. Last time we saw her she wasn't a particularly happy bunny so the change of ownership appears to be agreeing with her.

We chose the 19 euro menu. There being no house wines on offer, although we could order a merlot and a sauvignon from the Languedoc by the glass, we ordered a half bottle of Touraine Mesland Clos de la Briderie rosé. I was convinced I'd had this wine before and that it was a pinot d'aunis, but I had obviously mixed it up with something else. Anyway, it didn't go with my choice of starter at all, but went well enough with the roast guineafowl main.

Poached eggs in red wine sauce with lardons and mushrooms. 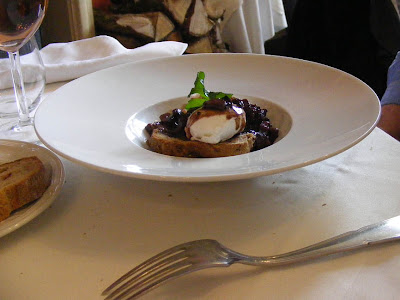 I had Ste Maure de Touraine goat's cheese served sitting on a caramelised apple ring and wrapped in brick to start. The chevre / pomme marriage was a very happy one. More often than not I don't like fruit and cheese combos but the apple was browned perfectly and made an excellent complement to the savoury chalky cheese. Simon had oeufs meurette, although that isn't what they were called on the menu, which is one of those where the dishes don't have names they have a list of ingredients. He reports it was excellent. 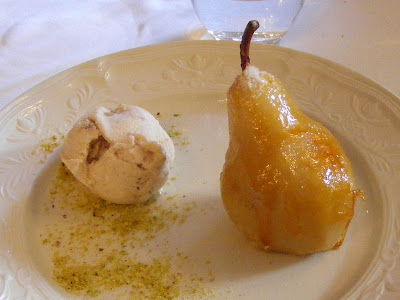 We both had roast guineafowl, which was served with crushed potatoes enriched with cream and subtly seasoned. This was very good, although like any anglophone I thought it would have benefitted by the addition of a green vegetable. Dessert for me was a poached pear covered in praline and a nut praline icecream. It looked fabulous, but sadly the pear tasted of nothing at all. The icecream was delicious though. Simon had tiramisu, which he felt hadn't got the right balance of cream (too much) to cake (too little). 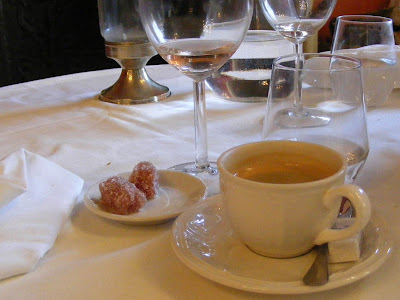 To round off the meal we had coffee, presented to us with a little plate of homemade quince cheese squares. I commented on these to the waitress and she said she had made them herself. I thought they were a very nice and creative alternative to the chocolate coated almond or speculoos you get elsewhere. As it happens I have 2 litres of quince puree in the fridge at this very moment, waiting for me to add sugar and boil it up into something that will set like stiff jelly and be a little Christmas time treat. 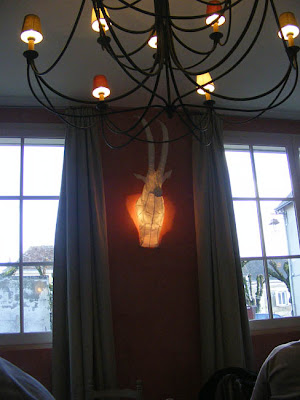 The total bill came to 50€ exactly and I thought it was fairly good value. The atmosphere is pleasant, the food is (mostly) good and it was nice to go somewhere new. The hotel part of the business is getting some good reviews (very nice bathrooms apparently) so I hope they do very well. It's the sort of place we will probably eat at every couple of years when we want to go somewhere other than our usual haunts.

Looks like you had a nice time! I've got loads of quince paste - might make something along the same lines - and the praline ice cream looks good!

Happy Birthday Susan - Its nice to do something special.
Is it far from home? Did Simon spoil you?

Happy birthday, Susan. I have happy memories of La Promenade and am sorry to hear it's gone. I hope the new incarnation does well. Any idea where Jacky Dallais has moved on to?

Jacky Dallais is still at La Promenade, le Petit Pressigny, so far as I know!

Happy Birthday Susan! Sounds as if the Relais de la Mothe is somewhere to keep in mind.

LJ: one day I'll get round to making some sort of nut/toffee/caramel type icecream.
L&S: Yzeures is 15km from Preuilly - the next village really.
SoG: You've got the wrong Promenade. I imagine that's one of the reasons the new owners chose to change the name. Dallais' Promenade continues to thrive.
N&A: yes, I think it would make a good place if you wanted to take guests for instance (especially if la Gerbe d'Or in Loches was closed).