A couple of weeks ago we finished work for the year, and the intention was to use the winter layoff to do some decoration at home and some little repair and updating work on Célestine. I even said at the time that "Today I will be sitting in the car park at Chenonceau for the 21st time this year."

What I thought would be happening 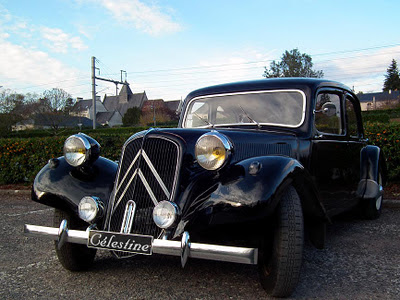 Unfortunately, Célestine decided to take matters into her own hands. After day one of the two day tour we left the clients at their hotel and drove to our own hotel to drop off our bags. Having done that, we set off to find something for dinner only for what appeared to be a flat battery causing a failure to progress. I tried all my usual coaxing tricks, but she wasn't having it - until suddenly the starter sprung into life, but not turning the motor over.

It was at this stage Susan noticed smoke coming from the dashboard.

Naturally this provoked a rapid response, but the battery was soon disconnected and the smoke stopped. Although we were puzzled, it did explain the smell of overheated rubber we had been noticing a for a while (For those who aren't au fait with old cars and their habits, new smells are as much a point of interest - but not a real cause for worry - as new noises. You investigate but don't panic.)

After some prodding and poking a wire was discovered trapped between two pieces of metal and a rubber seal. This was soon sorted, but left us with the issue of non-starting. It was at this stage we decided to roll start the car, drive home, and collect Reggie the Renault to complete our second day's work.

A kilometre down the road there was a very disturbing "CRACK" from the front end, followed by a grinding noise. This prompted an illegal but excusable u-turn and a return to the hotel. In desperation we phoned Jean-Louis, Traction Avant expert, mechanical genius and all round good guy, who said he would get a trailer and come and collect Célestine and find out what was the problem.

All we had to do was get to bed (without dinner, I may never recover from the trauma) and hire a car for the second day's work. Luckily the hotel was on a Tours bus route, so at 7.15 we caught the bus into town, hired a car from Avis (very expensive on a walk-in basis) and did our job. This meant that my last visit to the Chenonceau carpark for the year was in a Volkswagen Polo rather than Célestine. 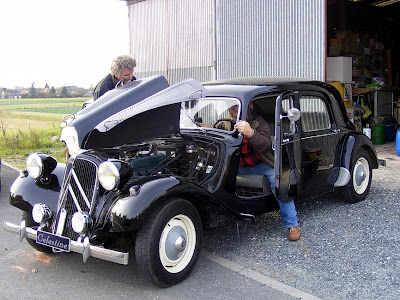 The next day I was off to London to see my dad, so work really didn't progress. Jean-Louis made some minor repairs to the starter and sorted out some of the wiring issues, but couldn't quite work out what the noise was, apart from thinking it might have been the differential. It was only ater we visited him on Monday, that on rolling Célestine into his garage he heard another crack, looked underneath, and spotted the problem.

It should just buff out... 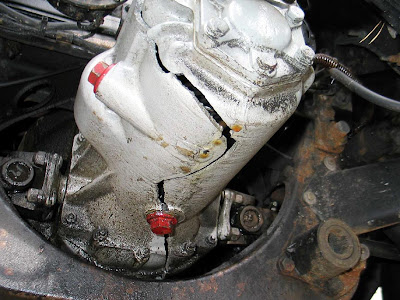 There was no clue before that this was the problem - we must have lost all of the gearbox oil on the first crack, with the fissure spreading enough to be noticeable only when the steering wheel was turned to put the car in Jean-Louis' garage.

We are now looking for a gearbox, but there are a few knocking around and Jean-Louis doesn't think it's going to be a major problem. There is a bourse on this weekend where we may find exactly what we are looking for. It may even give us the chance to sort out a slightly different set of cogs for a higher cruising speed.

The joys of motoring...

They really need to level Chenonceau car park!!! Seriously what has caused it to crack like that, never seen that before on any alloy casting. Except the odd mini gearbox which had been used for rallying without a sump guard!!

Colin. Apparently gearbox problems after a rebuild aren't rare: people will spend a lot of time getting the engine right, but skimp on doing the gearbox. Current theory is that it started with a problem with the diff, causing the case to try and flex when the wheel was turned.

I know this feeling - you've brought back to me the trauma of Traction gearboxes. Must say that I became very good at swapping 2nd gear cogs in the box but never splitting one like that.
Now this IS interesting did it sound like my word verification?
PLINGUG?

Leon - not at all like that. Imagine the sound of the worlds biggest gingernut biscuit breaking the sound barrier

Eeek! Simon, that does look fatal... bonne chance with the search for a suitable boite!
She's still a beautiful motor though... let's hope she's purring happily down the road in the next few weeks.

Tim: If you happen to hear of a suitable gearbox, please let us know.