The Price of Tropical Fruit

During the winter tropical fruit becomes affordable in France. Mangoes appear on the shelves (although they are almost always stringy and disappointing) and pineapples drop below 2€ a piece. Bananas, which are usually affordable but not good quality, improve so they are worth buying. The one fruit that I would quite like that I have only ever seen once in the supermarket here is pawpaw. I don't know why it isn't sold in French supermarkets. Passionfruit is intermittently available and always expensive, but usually good quality large soft skinned varieties.

In the UK tropical fruit also became much more affordable in the winter time. I guess it has to do with these fruits being in season November to February in their place of origin. Curiously, bananas were good quality and affordable all year round there, and pawpaws (called papaya in the UK) when they were available were better quality than in Australia. This was mainly because they were a different variety, with pink flesh not yellow. The passionfruit situation was much the same as here in France. 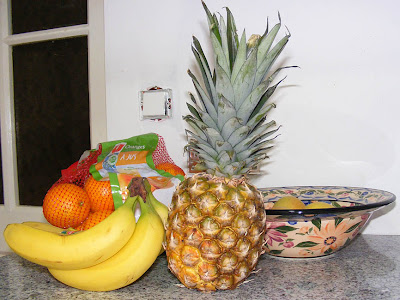 This fruit is all imported. Mangoes usually come from Kenya in the UK and Brazil in France, bananas from the Caribbean to the UK and from the Ivory Coast and Ecuador to France. Pineapples are from Ghana in the UK and Costa Rica in France. The passionfruit in Intermarché last week was from Zimbabwe and the only pawpaws I have encountered were €5.90 each! This is on a par with the pineapples at the market in Preuilly, which were being sold by the kilo. At €4.50/kg, it makes them about €7 each!!

In Australia I lived in a state where all these fruits were produced, but I notice that the price difference for tropical fruit is not necessarily as much as I expected. The pineapple in the photo cost me €1.50 at SuperU and the bananas €1.16 / kg. A cursory internet search revealed that I could purchase a pineapple in Australia for $2 (which is about €1.50) and bananas are predicted to come down to $1 / kg by Christmas (about 75 euro cents).

I mentioned two weeks ago that my mother was going in to hospital to have a pacemaker fitted. Unfortunately she didn't make the surgery list that day, but she did make it today and has had the pacemaker fitted in two hours time. She is happy and chatting and will be home tomorrow (or tonight our time).

Time zones - they get confusing, don't they...

Glad you mother made it safely and soon to be home.

Great news about your mother.
Pacemakers are truly one of the
wonders of modern medicine.

Here in Texas we get much of our
fruits and veggies from Mexico.
In May/June the mango season
starts, and they are plentiful
and cheap (50 cents US) and
delicous. But by late summer
the source changes to Brazil,
and I've never had a decent one
from there...I'm going to stop
trying. The banana display in
our supermarket takes up an
entire wall. Food staple over
here...48 cents per pound.
Need Ken to do one of his
kilo/pound, dollar/euro
conversions

I have some pineapple tree at my back yard , just wait for a couple of week I'll sent u one

I buy bananas here when they are at 89 cents or sometimes 79 cents. The value of the U.S. dollar right now is a about 76 (euro)cents.

I bought bananas today, here in the Coachella Valley of Southern California, and it was 69 U.S. cents a pound. Ten cents more than for sweet potatoes, if you're interested.