News From the 'Hood

And Dennis and Angela will be happy to read this. They very kindly brought our range hood over from the UK in their van back in April and have been teasing us about how long it has taken to get it on the wall and working.

Originally we had hoped to get an extracting type that vented out through the old chimney. However that proved too difficult to achieve and we opted for the recycling kind, semi reassured by the manufacturer's blurb that the recycling kind are much better than they used to be. 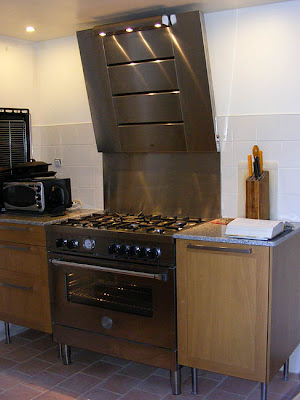 We needed a very specific style of range hood because our kitchen ceiling is rather low and Simon is rather tall. Most range hoods project horizontally over the stove, which would have meant Simon would have had to bend down underneath it to see anything on the stove top. We needed one that sat at an angle. Unfortunately, this style are all the most expensive ones, and still have to sit a minimum distance from the stove top. Simon went into internet search overdrive and eventually found this AEG model that looked good, was the right dimensions and at a comparatively reasonable price in a shop in Birmingham, England. It was delivered to Dennis and Angela's in Essex and they brought it over.

They arrived one lovely April day with an enormous box containing the hood and stayed to eat barbecued chicken with us. The day was memorable for me for another, less pleasant reason. I had managed to make myself really sick with sunstroke and dehydration planting out our potatoes, so I wasn't at my best.

Finally, months later, we have got the stainless steel crédence in place and the tiling done. We were ready to install the hood. It was a bit of a struggle manoeuvering it into place with no wriggle room because of the ceiling. Stéphane gallantly arrived yesterday morning to help and to do the electrical connection, despite still running a bit of a temperature and suffering from the lurgy.

The range hood looks good with Big Berta, and seems reasonably quiet. It has two light settings, indicator lights to tell you when the grease filter and charcoal filter need cleaning (both can go in the dishwasher!) and a 4 speed extractor fan. The top speed is already being referred to here as 'Warp Speed for Wokking'.

I will be very interested to see how much difference it makes. I have noticed that the jars on top of the cupboards collect a thin film of grease within days. Hopefully having a range hood will prevent that. Unfortunately, it is not equipped to deal with steam and condensation, so I will still have to be careful about ventilation if I've got stuff boiling furiously.

Another step towards a finished kitchen. Still to go is the question of what colour we paint the end wall, the putting up of racks and the return of the plumber to give us a functioning sink.

Susan, an ordinary kitchen/bathroom extractor on the wall by the loo and piped straight out the wall by the 'aulde' washing station would work for the steam/condensation. If you got a humidity sensitive one, you wouldn't have to even think about switching it on and orf!
Just get the highest cubic metres per hour you can get... and put the motor on the outer wall.

The hood looks really good though and I just love the "Warp-speed for Woking"... Simon will need to mount two lengths of tube just above the wok handle to act as the drives. Then the enterprise can fly again.

WOW!, that looks impressive. do the 4 horizontal panels flip out when active or does it suck it up thru the slots? I thaink we might need a gratuitous action shot.

Do the lights rotate? Perhaps a coloured filter...I'm thinking disco lighting now... the mirrored ball must be behind you...

Tim: might work. The tubing would have to cross the toilet ceiling though.

Andres: sadly the ceiling is too low for the disco ball. We have gazed longingly at them several times in the shops, but there is no point in buying one.

The panels are fixed, so the gunge gets sucked up through the slots.

Susan, you can get rectangular extractor tube... about 4 x 15 cm section that has adaptors to adjust it to the diameter of the actual extractor. It is often used above kitchen units and looks quite neat.
It would look better than a round tube... but it is a WC after all is said and done... The alternative is to mount it really close to the wall at the top and box it in with placo.
Or get Stéphane to do a nice chaux/chanvre cover on it so that it looks as though it has always been there....