Boudin blanc is available all year round in markets and supermarkets and we've written about these tasty white sausages before, but since they are also considered a bit of a seasonal treat over the winter holidays, I thought I would post again about them.

Boudin blanc to the right, boudin noir (blood sausage) to the left. 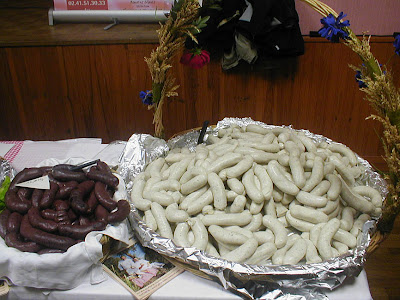 According to serious boudin blanc afficionados, they should still be considered a seasonal product, best purchased in the period from November to Easter. These artisanal boudins are made by charcutiers who infuse diced vegetables such as carrots, turnips and fennel with parsley, cloves and maybe even vanilla beans in milk for a couple of hours. Pork shoulder meat is mixed with eggs, salt, pepper, nutmeg and white wine, cider or pommeau (a fortified cider), then the milk is strained in. After the sausages are extruded they are plunged into boiling water which is taken off the heat and the sausages left to sit in the hot water for 20 minutes. Artisan charcutiers scorn the use of breadcrumbs in the mix.

According to one of the regional Confrérie des compagnons du boudin blanc (Brotherhood of Companions of the White Sausage - in other words, the trade association for boudin blanc manufacturers) the boudin blanc originated as a gruel of milk, breadcrumbs, fat, potato starch and sometimes ham or chicken which housewives would prepare at Christmas time. Everyone would then feast on it after midnight mass.

An artisan charcutier's stall at a market in the wintertime. 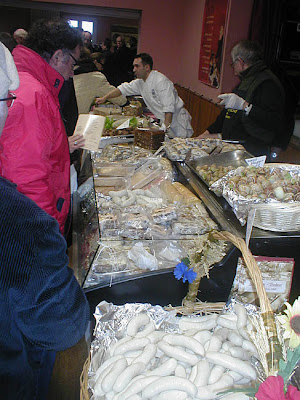 Modern recipes for boudin blanc vary from region to region and they are made all over France, but especially in the north. Some use lean pork, some use rendered fat or the cooked large intestine of the pig. Traditionally they are served with chestnuts, mushrooms or apples, depending on the region.

I love boudin blanc. In Belgium it is traditionally served with apple sauce. Yum!

Do you know I've never tasted boudin blanc. having just read your post I am now tempted ...

I'm with Martine on this one - it's mega-yum

2 questions, totally not related...
How is your mastery of "la langue Francaise" coming along?
I must have missed it somewhere, but what does WV stand for? It doesn't match with any "word of the day" I can think of.

Count me with Martine and Simon. Yum!

Pauline and I first tasted Boudin Blanc in a place called Revin... up near the Belgian/French border. We then went to buy some from the local butcher... his own style. And whilst there we saw a spaceship land, refuel and take off.


It floated into the petrol station opposite the buthcher's shop....


It gently descended to a rest in front of the pumps....


A very human-looking alien opened a hatch in the side and stood up, went over to the pump and filled up... he went into the paybooth and returned to his craft....


He got in, and the craft slowly rose and then, moving forward slowly and left.


It was the first time we'd seen a DS19 Decapotable in the flesh... so to speak.

It had red leather upholstery.... and we left little puddles of drool all over the pavement!!

Never be able to afford our own, of course, but the memory of that car lingers still and adds a new dimension to Hawkwind's "Silver Machine" whenever I hear/play it.

And whenever I eat Boudin Blanc....

Andres: Mastery is never going to happen. I assume WV is Word Verification.

Walt and I really like boudin blanc too. The texture inside is a little like the texture of the filling in a saucisse de Strasbourg (what we call hot dog or a wiener in the U.S.), only it's white rather than pink.