Here in Preuilly the storm named Joachim that came across from the Atlantic on 16 December was mostly a good thing. Following in its wake was more rain than we've had all year. Up to the end of November we had only had 80% of our average rainfall for the 11 months to that date. The advent of Joachim has probably sorted out the rainfall totals for the year to something close to normal. I can't remember the last time the stream in front of our orchard had this much water. In fact, I'm struggling to remember the last time it had any water at all! There has been a bit of localised flooding and a few trees were brought down, but better that than going into the new year with low aquifers and fragile drought stressed vegetation. Hopefully our drought has not been significant enough to cause the sort of worrying delayed reaction tree deaths that other parts of the world are currently observing. 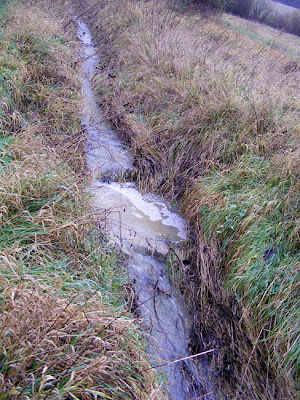 Of course, it's no use at this time of year in terms of watering the vegetables, but it will replenish the soil, give the trees some relief and the orchids will hopefully respond by putting on good leaf growth through the winter. The Bees, Early Spiders, Lizards and Pyramidals have been up for several weeks now, but even the Lady Orchids are poking their noses through the surface now. Last year they didn't appear until much later, well into the new year.

This year has confused everything... Tim found a Deptford Pink in full flower on the front lawn two days ago.... a late sign of Summer? Or just too early for 2012... problem is, there are no pollinators around.

Definitely better late than never. Our river is full to bursting and rushing like I've never seen it before. I NEVER thought I'd be doing a rain dance, but it almost got that way!

Last year here in Saint-Aignan, we got 130 mm of rain in December. That was the most for any month since we started keeping records in 2004. Now this December 2011 we are already up to 142 mm ! Incroyable.

Here in Texas estimates are that
500,000 trees were lost this year.
Thankfully, we've had some rain
lately.

PG: I fished a Marmalade Hoverfly out of some water the other day - they are always about.
LJ: naked?
Ken: statistically the wettest month here is supposed to be May, but there's not much in it - in a normal year the rain falls fairly evenly each month.
Sheila: I know - I've been reading some of the reports. The most worrying was the research showing that drought damaged trees are irreversibly damaged, leading to deaths down the track that aren't always obviously connected to the drought.