Liver paté is one of the French classic dishes, so when I found 1kg packs of turkey livers on sale for €2.95 I resolved to make a batch. The recipe makes about 2 litres of paté, but you can easily halve the quantities if you don't want to freeze half a dozen pots of paté.

The mixture is very liquid, but run it through a sieve to
prevent weird chewy bits in the paté. 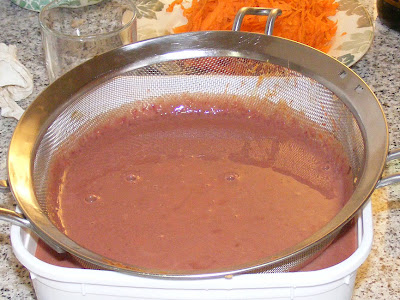 Method:
1. Preheat the oven to 150C.
2. Soak the gelatin in a small saucepan with 50ml of milk and set aside for 10 minutes to soften.
3. Blend the chestnut purée, livers, salt, pepper and allspice in a food processor.
4. Add the egg yolks and cognac and blend well.
5. Heat the milk and gelatin mixture gently until the gelatin is completely dissolved.
6. Add the gelatin mixture and the rest of the milk to the liver mixture and process until completely smooth.
7. Pour the mixture through a strainer to remove the filmy liver skins and any other lumps or bits. Use a spatula to rub through as much as you can.
8. Stir in the grated carrot. It will almost (but not quite) disappear once the paté is cooked.
9. Pour the mixture into a large terrine dish or several smaller ones.
10.Place them in a baking tray and add enough boiling water to come half way up the sides.
11.Cover loosely with foil and place in the middle of the oven.
12.Bake until set, about 1 hour and 15 minutes. The temperature at the centre of the paté should be 60C.
13.Remove from the water bath and allow to cool completely, then refrigerate overnight before serving.

Ready for the oven. 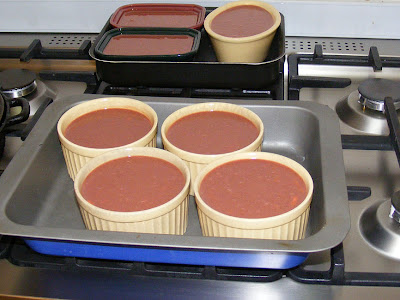 Liver patés traditionally contain pork fat, butter or cream to give them a smooth richness. However Sally Schneider developed a recipe using chestnut purée in paté which gives a similar mouthfeel, so you can avoid unwanted calories without compromising flavour or texture. This is my adaptation of her recipe.

These days there is no need to cover a paté in fat either, especially as many people discard it rather than eat it. It was a way of preserving the paté in the days before refrigeration by sealing the top, thus preventing surface mould growing and spoiling the preparation. Today you can simply pop the paté in the fridge or freezer. The darker colour that develops because it is exposed to the air is merely cosmetic and has no discernible effect on flavour. 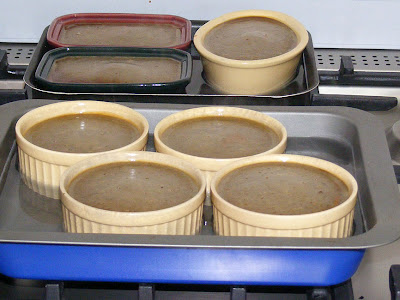 Both chestnut purée and grated carrot make excellent paté extenders if you only have a few chicken livers. Two livers with some grated carrot and other ingredients in proportion will make a 300ml pot of paté. The chestnut and the carrot enhance the natural sweetness of the liver and blend in very discreetly. The addition of grated carrot can also work as a way of sneaking some useful fibre and nutrition into any vegephobes or salad dodgers in the household. If you wish, you can substitute natural yoghurt for all or some of the milk, except that in which you soften the gelatin. And remember that the 6 left over egg whites gives you the opportunity to make a small Chocolate Chestnut Soufflé Cake. 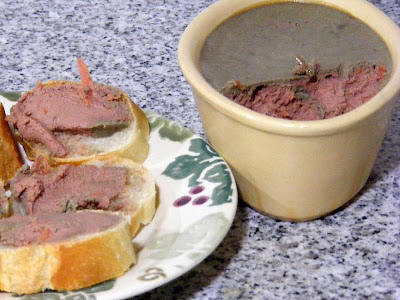 Serve on thin crustless toast triangles with a rather sweet wine such as Chateau Gaudrelle's Réserve Spéciale.

Now we'll have to make some!
It sounds really scrummy anyways!!
Alternative method of preserving is to do the initial cooking as you've described, but for one hour longer [watch the water level! Temperature in the centre should reach above 90 Centigrade], in Kilner or Le Parfait terrines.... with the lids loose.
As you remove, one at a time, each jar from the oven fasten the lid down tight. Keeps for around five years if you can avoid eating it for that long.

Have you tried Frogsmoke.com?
It is fun to follow, just like DOTC, although quite a different agenda.

Thanks, Susan, this one goes on the list. Do you think you might precook and then puree the carrot before adding into the pâté mixture? I'll probably put cream in mine instead of chestnut puree, since I don't know where to get that.

Tim: Brilliant - thanks for the extra info. I will definately do it that way next time.
HP: Yes I've followed Frogsmoke for a while. It's a touch blokey, but there are often gems.
Ken: Also brilliant and I can't believe it didn't occur to me to purée the carrot too. SS doesn't use carrot, btw, she uses plumped up sultanas. The carrot idea came from a guy who writes for a UK farmers market website, and I've used it for years now. Unsweetened chestnut purée will be lurking on the shelf with the canned chestnuts, in the canned veg section of the supermarket.

wonderful..love to try it someday

Sounds yummy! So one to try in the near future. Love the idea of using chestnut purée instead of cream.

I may try it too. Sounds and looks very good. Fortunately, I can find chestnut purée at Trader Joe's.

Are there any substitutes for the chestnut puree - I really doubt whether I will find it in Oz. A better use for the egg whites woould be macaroons in my house - Yum!!

Andres: You should be able to get cans of both sweetened and unsweetened chestnut purée in big supermarkets or specialist European grocers or delis. I used to buy it occasionally. Macaroons are good. My mother used to make coconut macaroons with spare eggwhites.