Sculpture in the Park 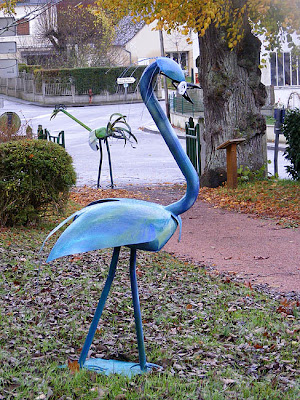 Last weekend there was an exhibition of sculpture in the arboretum opposite the médiathèque in Preuilly. The work was by a Breton artist called Mich Mao. In French he is an artiste plasticien, which is a term used to cover the visual arts in general. He works in metal, mostly using old motorbike parts for the big pieces and quite a lot of cutlery in the smaller tabletop pieces. They range in price from €35 for a tabletop penguin to €5000 for the big bird in the gateway. Most of the large birds were €2-3000 though. 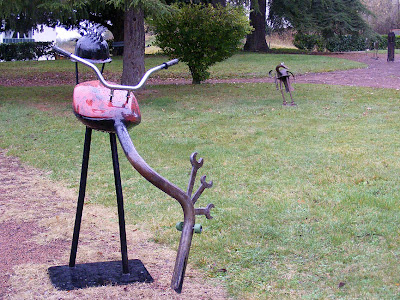 I thought they were rather fun, and he seemed a nice guy. It was a miserable day when I visited and I was his only visitor that morning. I was tempted to buy a tabletop piece - I love recycled metal sculpture - but we have a combination of French house restorer's and classic car owner's Dwindling Funds Syndrome at present. This is a condition identified for us by our building surveyor some years ago. 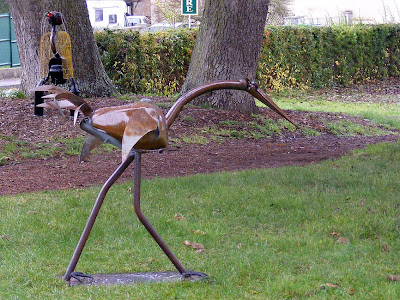 His next project takes him to one of the little islands near la Rochelle for 6 weeks. I don't think he is totally looking forward to it. He said it will be good from the point of view that it won't be bustling with tourists and interruptions, but being on an island on the Atlantic coast in the middle of winter isn't ideal.

Email ThisBlogThis!Share to TwitterShare to FacebookShare to Pinterest
Labels: Events, Gardens and Parks, Pictures of Preuilly

I really love the last sculpture... a bit Purple Heron'ish... I can just see it stalking through our young willows.... but 3000€s could go a long way toward the longere... oh well!
They are fun though.

WV is "wormin"... which is what that last sculpture looks as though he's about.

These are very funny and very well made. Couldn't afford one now, though our plumber probably could.